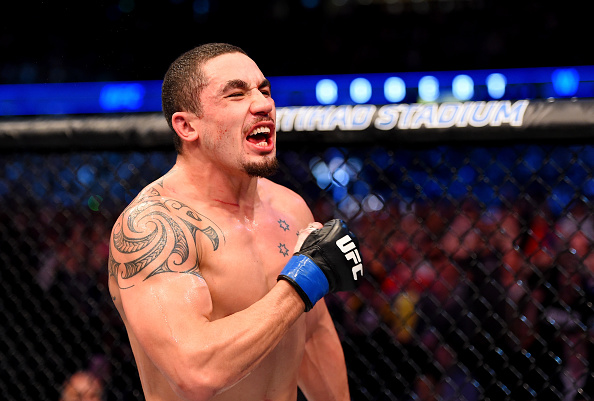 Watch Robert Whittaker in the UFC Octagon and the word “fearless” comes to mind.

Whittaker, who fights Rafael “Sapo” Natal this Saturday on the main card of UFC 197, relishes standing toe-to-toe with his opponent and trading bombs. He says he fights for the finish and he means it.

So is he fearless? Not quite, says Whittaker ahead of his fight at the MGM Grand Garden Arena in Las Vegas, Nevada.

Whittaker’s aggression and sharp stand-up technique has served him well. After a decision win over Mike Rhodes, Whittaker moved to middleweight from the welterweight division in late 2014. The change paid off, and he has racked up three straight wins: A TKO over Clint Hester, a KO of Brad Tavares and a unanimous decision win over ultra-dangerous Uriah Hall.

The win streak has earned Whittaker a No. 7 ranking in the UFC middleweight division. The 25-year-old fighter is closing in on a top five spot and a fight against an elite 185-pounder. But Whittaker says he isn’t thinking about where a win over the No. 13-ranked Natal might place him in the division.

That’s because Whittaker believes there’s plenty of time to fight everyone.

“I’ve never really worried about the rankings. I want to win purely because it’s a fight and that’s the outcome I want from my camp and my training preparation, not because of one (opponent). In the long run, I want to fight absolutely everyone and the UFC have done a good job of putting them in front of me and I’ll do the rest.”

Whittaker’s performances at middleweight have created buzz. UFC President Dana White has singled out Whittaker as a future star. But fame is not his focus. Like the rankings or his next opponent should he beat Natal, it’s secondary to the 15 minutes or less of combat on Saturday night.

“It’s just part of the package really. I didn’t start MMA to try and become famous or try and achieve fame. It’s just what it is, it’s part of the game, I’m happy to have people look at me and respect and admire my work, but it doesn’t help me beat my opponent, and it won’t help me beat Natal in the Octagon, not even by one percent. I’ve just gotta put it in the back and keep walking on.”

“He’s persistent, he’s rugged and he’s got cardio,” Whittaker said of his foe. “He’s a proper grinder and he’s legit. I just think his toughness and his wide ranging skill set are his biggest strengths. People underestimate him.”

Natal is particularly dangerous on the ground. A former Brazilian Jiu-Jitsu world champion and a black belt under legends Renzo Gracie and Vinicius Magalhães (Draculino), Natal has eight MMA wins by submission. But the BJJ pedigree of “Sapo” hasn’t changed Whittaker’s preparation.

“I work with black belts day in day, day out. Whether I was fighting Natal or anyone else, my jiu-jitsu needs work. So I’m going to be there honing my skills and my jiu-jitsu game regardless. I’ve got leaps and bounds to learn in all fields, including striking. I don’t think an opponent change or a particular opponent should change the way that I train,” Whittaker, a BJJ purple belt, said. “I’ve got to be covering these gaps, not because an obstacle has shown itself in front of me, but more so because that’s where the holes are and that’s where I need to improve and close the gaps to better perfect myself as a fighter.”

Whittaker is a believer in focusing on his own game not his opponent’s, and has left the in-depth study of Natal’s fights to his coaching staff. The New Zealand-born Australian prefers to watch just enough footage to develop a mental picture of his foe.

So has he visualized knocking his opponent out?

“Always,” he laughs. “I constantly go through situations where I can hit and hurt him.”

Since the outset of his UFC career as the winner of The Ultimate Fighter: Australia vs. UK - The Smashes, Whittaker has appeared to have the mental side of fighting figured out. Always confident, “The Reaper” has proven that he can perform under pressure, as he’s risen to the occasion against progressively tougher opponents.

But Whittaker is also a realist. Some fighters refuse to acknowledge the possibility of a loss, believing it to be a sign of weakness psychologically. Whittaker, who lost twice in the Octagon before his current four-fight win streak, is not one of them.

Whittaker believes he’s done all he can in training to combat any doubts ahead of his biggest fight to date, and promises the best version of himself yet.

“This is the best Robert Whittaker that’s going to step into the Octagon. I really haven’t stopped training since my last fight and the prep is just on a different level. I feel like I’ve raised levels and volumes and we’ll see come fight day.”