Whittaker believes he'll be champion, and that's the least of his expectations 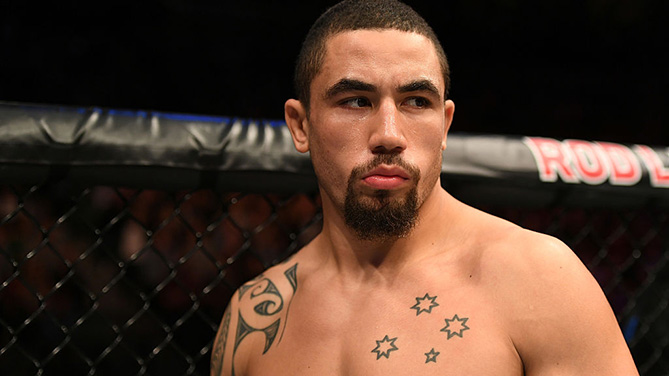 As he approaches his Saturday showdown with Yoel Romero, Robert Whittaker truly believes he can be UFC champion.

But that wasn’t always the case.

It was a conversation three years ago that made him really start to believe.

“A lot of people have said it in my lifetime, but the one dude who said it and truly made it click over, who’s in my corner now, was Fabricio Itte (Whittaker’s wrestling and high performance coach)," Whittaker said. "We had a good chat, and he said that I have everything to be champ, but I can be so much more than that, and that should be the least of my expectations to become champion.”

UFC gold is now a fight away for the New Zealand-born Australian. Whittaker will fight Romero for the interim UFC middleweight title in the co-main event of UFC 213: Nunes vs Shevchenko 2.

The winner of his last seven UFC fights, the 26-year-old Whittaker is the closest thing the UFC’s middleweight division has to a wunderkind.

And while an unknown often hovers over a young fighter when it comes to learning whether they can handle defeat, that’s not the case for Whittaker, the winner of 2012’s TUF Smashes series, as he lost two straight UFC fights at welterweight in 2013 and 2014.

Those losses didn’t break Whittaker’s spirit. Instead, Whittaker made some major adjustments, leaving Tristar Gym in Canada in favor of a homegrown training camp. Realizing the cut to welterweight was sapping his energy, he moved up to the middleweight division.

Whittaker has since improved exponentially with every fight.

It was Whittaker’s most recent fight, a win against Ronaldo “Jacare” Souza in April that signaled to the MMA world that he was championship material. Whittaker out-landed the Brazilian standing and shut down his elite Brazilian jiu-jitsu game, scoring a TKO in the second round.

WATCH: GuardLab's 'In My Own Words" w/ Robert Whittaker - Part 1

Whittaker doesn’t have a perfect record to protect, and he has proven he can bounce back from a loss. “The Reaper” is now a rare mix of veteran and prodigy, and has both wisdom and time on his side.

“I’ve lost before, and I’ll lose again one day, and I’ve won as well. And it’s just part of the game, it’s part of competing, it’s part of fighting. I don’t go into these fights thinking about the result or thinking I need to win or I don’t want to lose,” Whittaker said ahead of his fight at T-Mobile Arena in Las Vegas. “I just want to go in there and perform, and where I need to grow, the day after (the fight) I’m gonna go back to the drawing board and start working on that skill set again because I have time to adjust, test it in the Octagon, and take it back and do more testing, and train and get better. I have so much time, and that’s where my biggest gains will be, outside the Octagon, where I’m growing as a fighter.”

Some fighters jump from camp to camp or churn through coaching staff, chasing the next fix that they believe will turn them into a champion.

But Whittaker has found the right formula in his Sydney-based camp that includes head coach Henry Perez, Brazilian jiu-jitsu coach Alex Prates, and wrestling coach Fabricio Itte. It’s been the same lineup for his last seven fights, and Whittaker says there have been no personnel changes.

“It’s the same camp, same procedure I always do. Every camp I’ve been getting great results, I’ve just been increasing my skills, and every time I step in the Octagon you see a better Robert Whittaker, and this fight’s gonna be no different. I’m making huge gains every fight.” 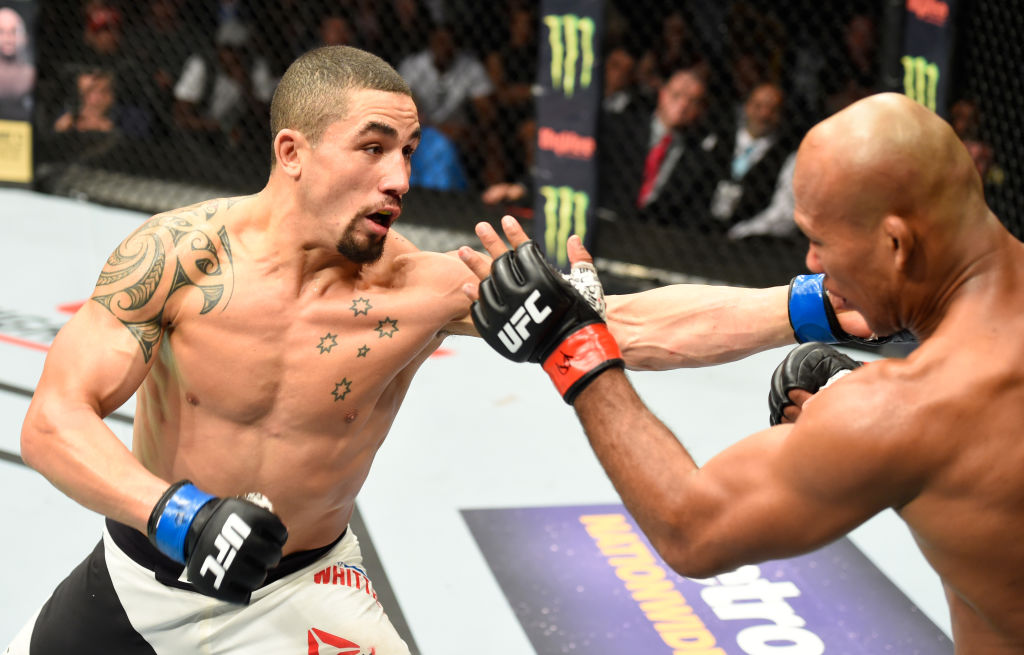 Much of Whittaker’s ascent is thanks to his high fight IQ, or ability to fight smart under pressure. From staying calm against a charging Derek Brunson or neutralizing Jacare’s ground game, Whittaker just appears to know what to do and when to do it inside the Octagon.

“It could be from a lifetime of martial arts, or it could just be something I was born with. I’m not exactly sure where it stems from,” Whittaker said. “I have a lot of discipline when it comes to training and martial arts. When I get in there, things just seem to click.”

On paper, Romero will be Whittaker’s toughest fight to date. An Olympic silver medalist and world champion in freestyle wrestling, Romero made his professional MMA debut in 2009.

The Cuban-born American Top Team product has won all eight of his fights in the UFC, with six of those victories coming by way of knockout. In his last fight in November of 2016, Romero dispatched former UFC middleweight champion Chris Weidman with a flying knee in the third round.

The 40-year-old Romero is the No.1 contender in the UFC’s middleweight division, and Whittaker says he doesn’t see any particular weaknesses in his opponent’s game.

“Yoel’s got some great strengths," Whittaker said. "He’s been at the top of the food chain for such a long time, but instead of me worrying about (his weaknesses), when you reach the top ten, top five, there’s not really any weaknesses anymore, it’s more about imposing your own game plan on your opponent and using your strengths against his. I’m just gonna be me, I’m gonna go into the Octagon and be me. I’m gonna fight the way I fight and see how it goes.”

While Whittaker has the opportunity to be the first Australian UFC fighter to capture a world title belt, it’s the challenge Yoel Romero presents that seems to be his biggest motivator.

“I’m gonna go in there looking for a finish as I always do. If it goes for twenty-five minutes it’s not for lack of trying. Trust me, I’m gonna get it.”