"The Download" with Dana White is a weekly UFC.com exclusive interview with the boss, covering everything that's in the news. This week Dana talks about Ronda Rousey's star power, the loaded featherweight division and Luke Rockhold-Michael Bisping. 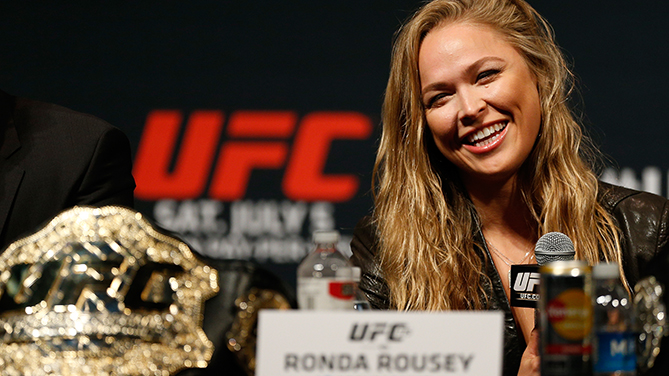 Ronda Rousey vs. Cat Zingano was made official last week when the news that the champ would face arguably her most formidable foe to date at UFC 184 in Los Angeles hit the wires.
Following the announcement, many wondered why Rousey, one of the UFC’s biggest draws, was placed in the co-main event for the second-straight event instead of headlining a card.
UFC President Dana White said where Rousey appears on a card has nothing to do with star power. 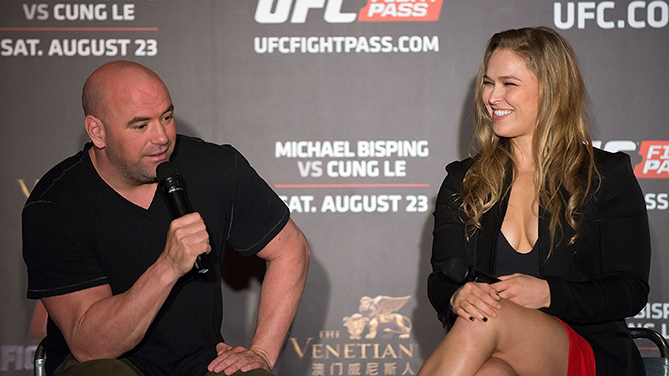 “It has nothing to with her not being a star. It goes by weight,” White told UFC.com in his weekly exclusive interview. “If she was the highest weighted champion on the card, she would be the main event, but you have two guys that are middleweights and she weighs 135 pounds – so she’s the co-main.”
Rousey was originally slated to face Zingano at UFC 182 as the co-main event to Jon Jones vs. Daniel Cormier for the light heavyweight title. But White said he wanted to bring a monster card to L.A. after UFC 176 fell apart due to an unfortunate Jose Aldo injury.
“The last L.A. / Staples Center fight we had with Aldo killed it. Ticket sales were awesome and then we had to shut that thing down,” White said. “I just wanted to bring a great card back to L.A. Now we have Weidman versus Belfort and Ronda versus Cat.”
Rousey is a Riverside, Calif. resident and will make her first Octagon appearance at the Staples Center, just an hour away from her hometown.

On Bisping-Rockhold in Sydney…
In one of the most heated rivalries of 2014, things will finally be settled between Luke Rockhold and Michael Bisping in Sydney this Friday on UFC FIGHT PASS.
White said everybody seems to step in line to fight Bisping, but that the middleweight is no easy fight.
“Everybody wants to fight Michael Bisping. Everybody thinks Bisping is some easy fighter or pushover,” White said. “Well, he’s no pushover.”
> MORE: Fight Night Sydney Preview | Predictions | Michael Bisping: Focused on winning | Watch: One Round w/ Bisping | Gym Escape w/ Rockhold | Pre-Fight Presser Highlights
When the bell rings, White expects both guys to put on a fantastic fight.
“There is no doubt Luke Rockhold is a very tough, well-rounded guy. I think this fight is very interesting,” he said. “This is one of those perfect fights at the right time where you’re going to see where Bisping or Rockhold will go after this fight. I think this is a real good matchup.”
> Start your UFC FIGHT PASS free trial now to watch Fight Night: Rockhold vs. Bisping 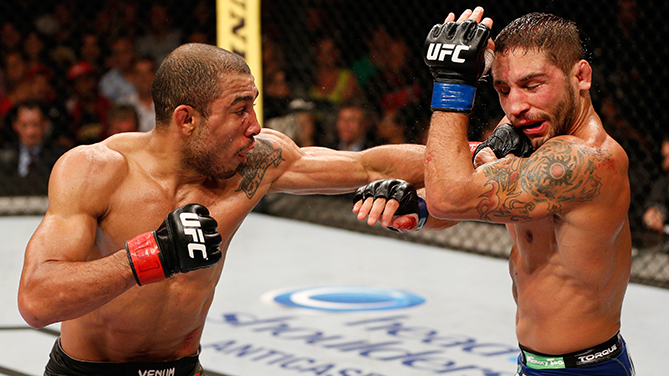 On the featherweight division…
Jose Aldo currently cemented himself as the premier fighter at 145 pounds when he bested Chad Mendes in the main event of UFC 179.
A few days after the Fight of the Year candidate, White actually called both Mendes and Aldo to personally thank them for their performances in Brazil.
“I called Mendes and I called Aldo three days after the fight to tell them how honored I was to be able to sit in the seat I was sitting in and seeing that fight,” White said. “It was two guys who don’t want to move backwards and who won’t break, and they just kept going at each other. Aldo won the war of attrition. He won that fight. A lot of people were talking about Mendes getting robbed. Mendes fought an awesome fight, but Aldo absolutely won that fight and I think it raised his stock.”
White also gave props to Mendes and his striking coach Duane “Bang” Ludwig. 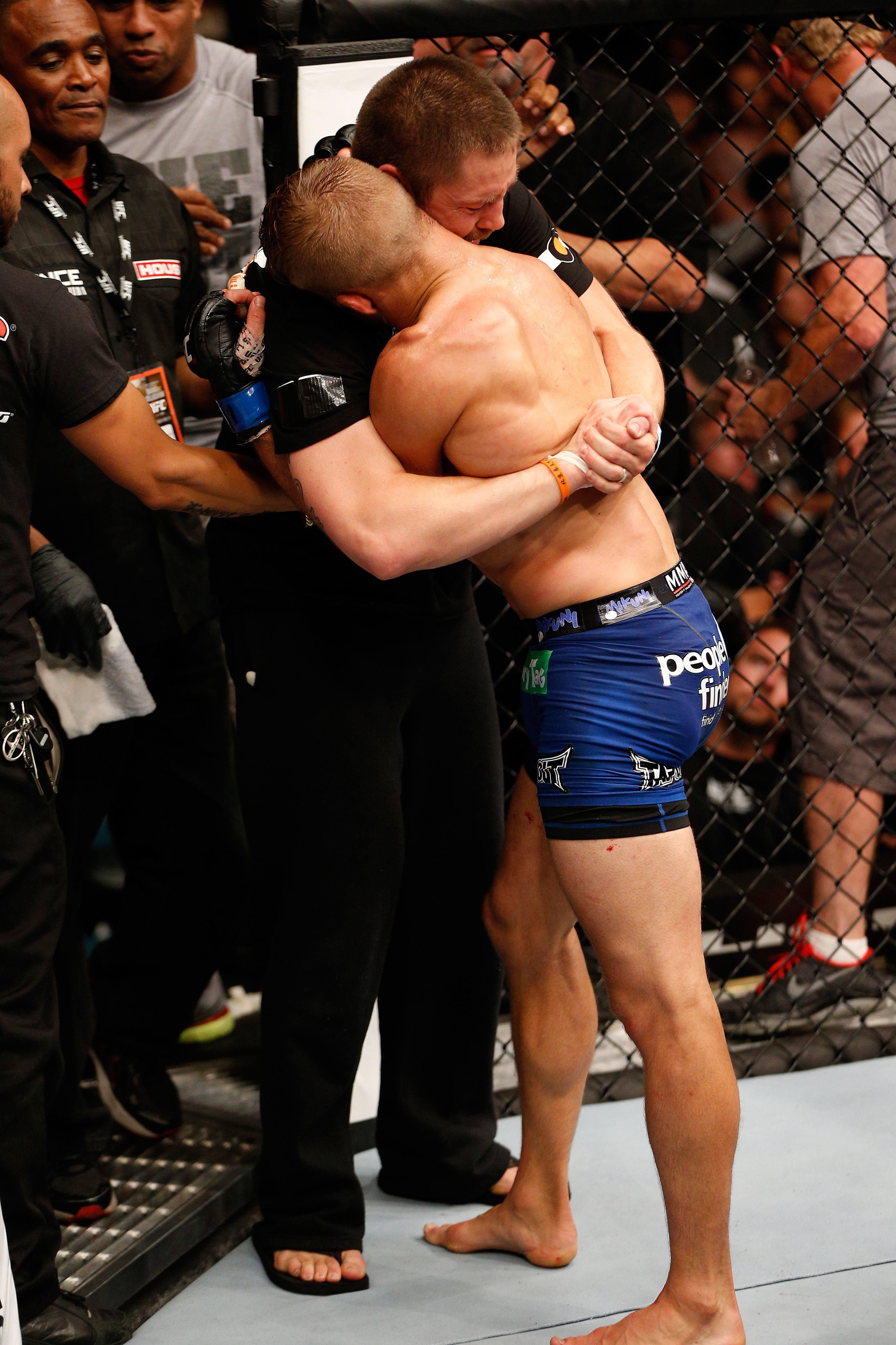 “All the props in the world to Bang Ludwig, who might be the best striking coach in the business. Yes, he jumped into a camp full of studs, guys who were extremely talented, but they were wrestlers,” White said about Ludwig, who also coaches UFC bantamweight champion T.J. Dillashaw. “What you saw at UFC 179 was a Chad Mendes who was checking Aldo’s kicks, and I think landed more leg kicks than Aldo did in that fight. Mendes wanted that belt so goddamn bad, and they went toe to toe.”
> Looking Ahead: Fight Night: Edgar vs. Swanson | Fight Night: McGregor vs. Siver
White said the featherweight division has become one of the most entertaining and deep divisions in the UFC, and there are more awesome fights on the horizon.
“Especially with all the excitement in that division with Conor McGregor, Cub Swanson and Frankie Edgar - that division is so exciting that people are talking about freaking Nik Lentz and Dennis Bermudez,” White said.
Swanson and Edgar meet at Fight Night Austin on Nov. 22 and Swanson recently said he was assured that he, not McGregor, would get the next shot at Aldo if Swanson knocks off Edgar.
White isn’t making any fights just yet, though. He wants to see how things play out.
“I told Cub and Frankie, ‘Don’t worry about anything you hear with all the Conor McGregor talk and all the other stuff. You worry about Cub Swanson and you worry about Frankie Edgar.’” White said. “Believe me, the fact that people are arguing over who should get a title shot in the 145-pound division isn’t a bad thing. It’s a good thing.”
Stay connected with Dana: