Whether it's Calm or Chaotic, Koscheck Finds His Way

"I need to be at a hundred percent, full steam ahead, when I fight Johny Hendricks." - Josh Koscheck 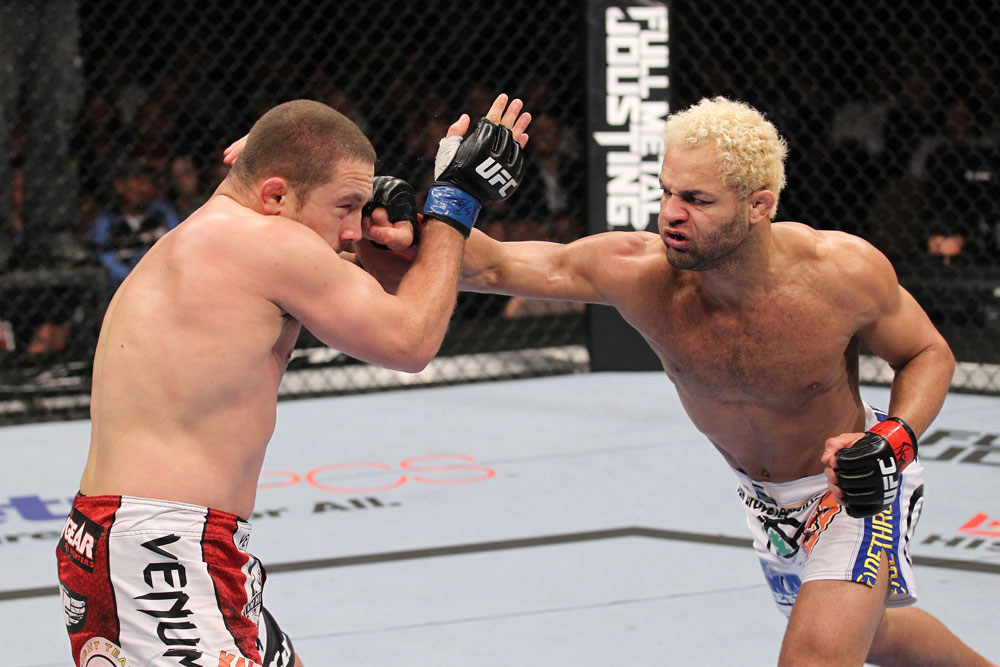 Fans and pundits analyzed Josh Koscheck’s close split decision win over Mike Pierce at UFC 143 in February from every possible angle. Was he distracted by an impending split with the AKA camp in San Jose? After 20 UFC fights, had Father Time started to creep in on the 34-year old native of Waynesburg, Pennsylvania? Did Pierce just have his number?

None of the above.

“I didn’t have any real motivation to fight Mike Pierce, to be honest with you,” admitted Koscheck, who improved to 19-5 with the victory, his second straight since losing to welterweight champ Georges St-Pierre in December of 2010. “He doesn’t have a very big name, I really didn’t have much motivation, and you could tell the night of the fight. I probably fought him at 60 percent. Not taking away from Mike Pierce, he fought a good fight, but I think I’ve got a little more motivation to fight Johny Hendricks than a Mike Pierce.”

That’s understandable. Hendricks, like Koscheck, is a former NCAA Division I national wrestling champion (Hendricks actually pulled it off twice), he is coming off a 12 second knockout of Kos’ friend and longtime training partner Jon Fitch, and the bout will be televised on network TV thanks to FOX. That’s plenty to get you motivated right there.

“This is a big event, and I can’t believe that they’re actually putting me on FOX,” he chuckled. “As rated R as I am usually, it’s pretty bizarre, but they’re smart, and they get it. They want to get good ratings, and a guy like me, a real son of a bitch, can make for good TV.”

But he wasn’t going to get to this point without beating Pierce, and while he was far from vintage Koscheck on that February night in Las Vegas, if you’re an elite prizefighter, you can usually find a way to win, either with experience, heart, guile, or all three. That’s what Koscheck did against a hungry opponent eager to use the Ultimate Fighter season one star as a stepping stone to bigger and better things.

“This was actually the first time that I was in a different place in a fight, and I definitely pulled the victory out by small details and small things,” he said. “I need to be at a hundred percent, full steam ahead, when I fight Johny Hendricks.”

Koscheck’s respect for his foe is apparent, even if he doesn’t come out and say it explicitly. That’s what we’ve gotten for the most part from one of the sport’s most polarizing figures. If he doesn’t like you, he’ll let the world know. If he respects you, well, you just won’t hear him.

“I feel like I’ve been respectful to a lot of fighters out there, but certain fighters I definitely disrespect because I don’t like them,” he said. “But there have been plenty, for example Matt Hughes. When I fought him, I was very respectful toward him, I didn’t really say anything too bad, and after the fight, look at my speech. Look at my speech after the St-Pierre fight. It is what it is, and they’re gonna hate and continue to boo, and I’m gonna continue to win fights just to piss them off even more.”

That could get tiresome for most, but not for Koscheck.

“It doesn’t bother me at all,” he said. “The people that really know me and the people that get the opportunity to sit down and have a one-on-one conversation or hang out with me, they get it, they understand, and there’s no hard feelings. If I gotta be hated to be successful, then I guess I gotta be hated. I feel like there’s no changing it at this point in my career.”

You get the distinct impression that he means it too. But what about entering one of the most important fights of his career without the AKA banner behind him? Koscheck, who now works out of the Dethrone Base Camp in Fresno, admits that this camp has pretty much been business as usual.

“This camp’s no different from the last couple,” he said. “The only difference is that I’m training in Fresno. I’m training at the same times every day – 12 to 2 fight training, and all my cardio or my mitts from 7 to 9. So it’s no different. There are some different faces and a couple different coaches involved, but overall it’s pretty much the same.”

That’s the good news. The even better news for him is that while he enjoys the serenity of a drama-free camp, he also has a Manny Pacquiao-esque ease in being the calm in the middle of chaos. So when camera crews descended on him in Fresno and the east coast media prepares for him this week, it’s nothing that will distract him from the task at hand, which is beating Johny Hendricks and inserting his name back in the title picture.

“I’m definitely in a good place, and definitely in a place where I can be relaxed and focused on one thing, and that’s becoming a better fighter,” he said. “But I can do both (deal with calm and chaos). The past couple weeks have been pretty crazy. I’ve had three different film crews pretty much living with me (Laughs), but before that, it was really quiet. I deal with both of those perspectives and I just try to go about my day and focus on the things that I need to focus on to win this fight.”

As for Hendricks, Kos says, “He’s a former (wrestling) champion, but he’s claiming that he’s a better wrestler, and that’s fine with me. He can be a better wrestler, but I’m a better fighter, and that’s what we’re doing on May 5th – we’re fighting. I think that it’s cool that it’s the first time two national champions get to square off, but he’s young and I think that with my experience and me being a better fighter, it will pay off for me.”

At 34, Koscheck only has six years on the 28-year old Hendricks, but in terms of UFC experience, it’s an open and shut case for the Californian, and that’s what he’ll rely on this weekend. Sure, both have one punch knockout power and top-notch wrestling pedigrees, but in a bout like this, one like the Pierce match, it’s the little things that could play a big role in the outcome, such as being willing to go into deep water and do whatever it takes to win. And for all of Koscheck’s talk about the money, his cars, his planes, and his houses, his actions speak louder than words, and over the years, his actions have shown just one thing: he’s willing to go that extra mile to win.

“I fought a lot of good guys and I never backed down from a fight,” he said. “Even when it’s somebody I really didn’t want to fight and I said ‘what’s this guy gonna do for me?’ I still fought him anyway, and I’m the type of guy that will fight anybody. I’ve never said the word ‘no’ to anybody about stepping up and fighting. When somebody backs out, I’m the first guy that volunteers to take the fight whether I’m in great shape or not. At the end of the day, I felt like I’ve done what I need to do to make a name, and as a fighter inside, I will fight anybody anytime. And when the UFC doesn’t call, I’m calling them to beg them to let them take the fight. I’ve offered to fight at 185 just because I like to fight. It’s something inside of me that says I want to compete and test myself. I’d rather be out there in the public fighting than in the gym training. The training is the hard part, the fighting is the easy part, and I’d rather be fighting in the Octagon in front of the millions of people that are watching than be in the gym training. I’d fight every month if they’d let me, and you’re never gonna find out if you’re truly the best if you don’t fight everybody. And I’m not afraid to fight anybody.”