Amanda Nunes Regained Her Belt And Double-Champ Status In Dominant Fashion, But What's Next For "The Lioness?"
By Zac Pacleb, on Twitter: @ZacPacleb • Aug. 2, 2022

Amanda Nunes restored her double-champ status in Dallas, Texas, but it wasn’t without a gritty resistance from Julianna Peña. Although Nunes dominated, Peña earned herself plenty of compliments for the effort she gave in her first title defense.

Where Nunes goes now is a little cloudy at the moment as no other title challengers have distinguished themselves. With that in mind, this is where we stand in the women’s bantamweight division: 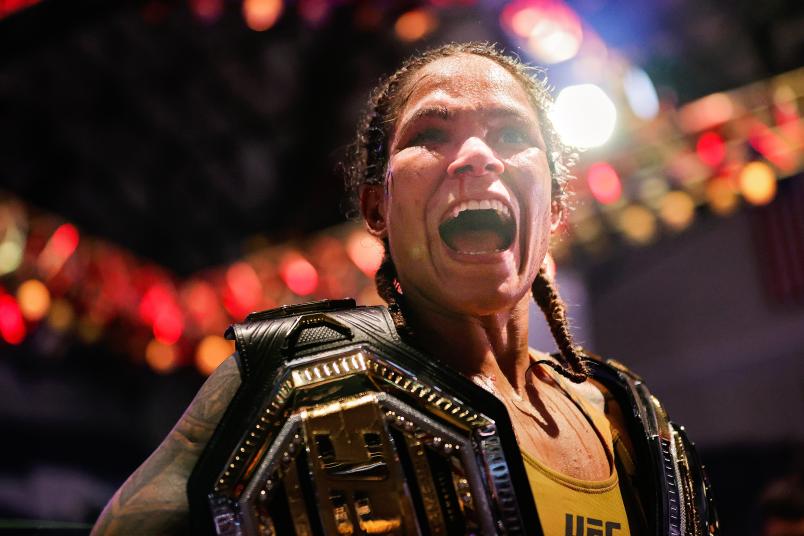 Outlook: The “Lioness” roared mightily at UFC 277, more or less dominating Peña en route to getting her bantamweight strap back in her possession. Although Peña was threatening off her back, Nunes had little doubt she won when the scorecards were read. She mentioned afterward she is interested in defending her featherweight belt again, although a clear-cut challenger is lacking. At 135 pounds, one could argue for a third fight between Nunes and Peña since the series is locked at one win each, but Dana White did mention some interest in the idea of a third fight against flyweight champion Valentina Shevchenko, over whom Nunes holds two wins.

Outlook: “The Venezuelan Vixen” performed well in the rematch against Nunes, although she ultimately came up short. Nonetheless, Peña’s toughness only rose in defeat, and she never stopped working for a Hail Mary finish for the whole fight. She has a good enough case to fight Nunes a third time even though it’s uncertain if Nunes would go for that at the moment. Whether Peña takes a non-title fight is also uncertain, but she could have her name on the tip of everyone’s tongue as someone who could put them over the edge and into their own championship fight. She hasn’t fought anyone in the current top-5 of the division. 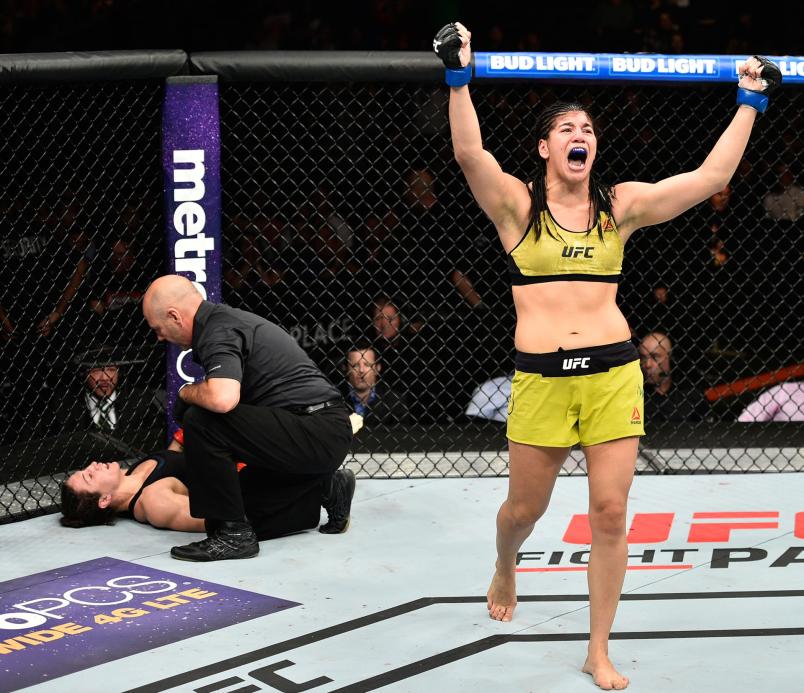 Ketlen Vieira of Brazil celebrates her submission victory over Sara McMann in their women's bantamweight bout during the UFC 215 event inside the Rogers Place on September 9, 2017 in Edmonton, Alberta, Canada. (Photo by Jeff Bottari/Zuffa LLC)

Outlook: Vieira gutted out a controversial decision over Holly Holm to pick up her second-consecutive win, but the Brazilian might need to put on a statement-making performance if she wants a chance at the 135-pound belt. After losing two of three, wins over former champions Tate and Holm in main events are huge for her stock, so the resume is there if Nunes is eager face a fresh face. 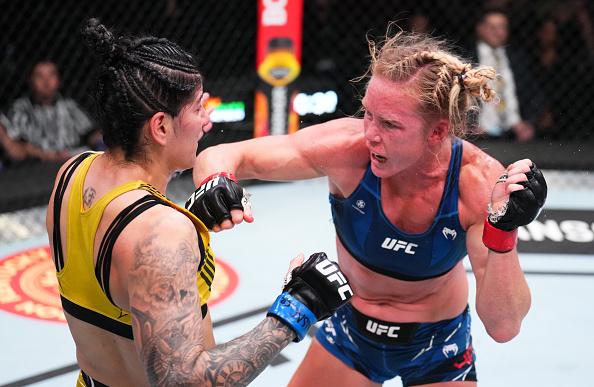 Holly Holm punches Ketlen Vieira of Brazil in a bantamweight bout during the UFC Fight Night event at UFC APEX on May 21, 2022 in Las Vegas, Nevada. (Photo by Chris Unger/Zuffa LLC)

Outlook: Holm seemed like she was on her way to once again solidifying herself as one of the best bantamweights in the world not named Amanda Nunes, but the judges saw her fight against Vieira differently, and Holm suffered quite a setback because of it. Her case for another shot at Amanda Nunes was shaky after losing via knockout in their title fight, but those chances dwindled even more afterward. The fight was also Holm’s first since 2020, and at 40 years old, there is some curiosity about how much longer Holm would like to compete in MMA. She could provide an interesting fight with Peña if Peña doesn’t get an immediate trilogy fight. 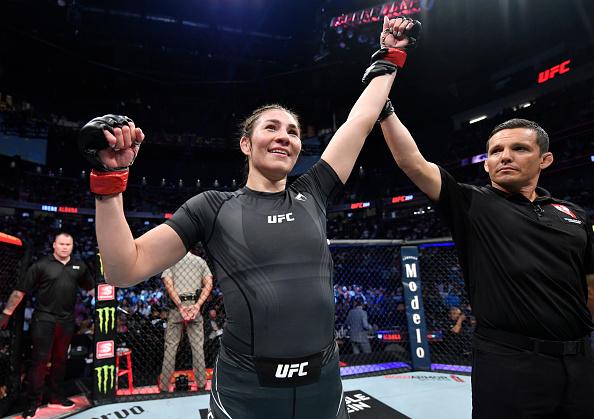 Outlook: After dropping her first main event against Holm in October 2020, Aldana responded with a devastating knockout win over Yana Kunitskaya at UFC 264. Had Nunes successfully defended her belt, Aldana had a pretty good case for the next title shot. Alas, she’ll have some waiting to do. Aldana was scheduled to fight Germaine de Randamie at UFC 268 before de Randamie pulled out of the fight, so it’s unknown if that fight is still in play. A win over Macy Chiasson in September, if definitive and stylish, could provide the necessary boost she needs to stamp her claim onto a title shot. 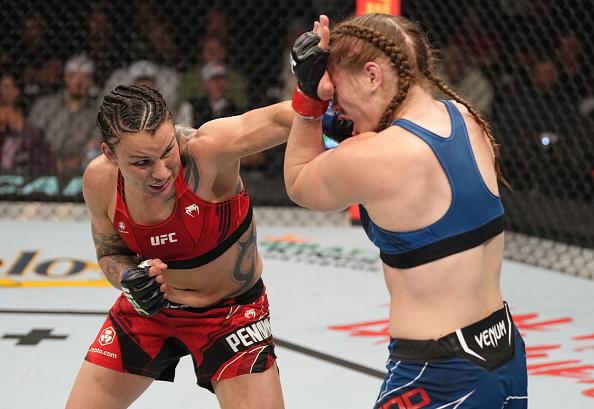 Outlook: “Rocky” reaffirmed her status as a top-5 bantamweight with her steady victory over Aspen Ladd, which capped a seven-month stretch in which Pennington defeated Pannie Kianzad, Macy Chiasson and Ladd. Pennington has always been a tough out, and her only UFC losses have come to women who’ve held gold in the Octagon. If she can pick up a few more wins, she could have a fair shout at another title shot. Of the top-5, she hasn’t faced Peña nor Vieira.

In the Mix: Valentina Shevchenko

Outlook: The looming specter over the bantamweight title picture is the idea of a trilogy fight between Nunes and Shevchenko, especially as both women dominate their respective decisions. A crowd still maintains Shevchenko defeated Nunes in their second fight, but the records are what they are, and Nunes hasn’t shared much interest – at least publicly – in a third fight until rather recently. Although Shevchenko has a slew of up-and-coming challengers in her sights at flyweight, the prospect of besting her rival and earning double-champ status of her own might entice “Bullet” to make the trek back up to bantamweight once again.