Where We Stand: UFC 259 Edition

Take A Look At What Could Be Ahead For Bantamweight, Women’s Featherweight and Light Heavyweight after UFC 259
By Zac Pacleb, on Twitter @ZacPacleb • Mar. 8, 2021

With three title fights going down at UFC 259, we dove into what is ahead for each division going forward.

Outlook: “The Lioness” added to her already-untouchable resume with another rather flawless performance, submitting Megan Anderson inside the first round and completing the second defense of her featherweight title. It’s getting into odd territory for Nunes, who has cleaned out the better part of two divisions in dominant fashion, especially of late.

The biggest challenge, apparently, to Nunes’ featherweight reign is lack of depth in the division. The only conceivable challenger appears to be Danyelle Wolf, who, despite having an championship pedigree in amateur boxing, made her professional MMA debut on the Contender Series. She is expected to make her UFC debut soon, so if she does something spectacular, perhaps that earns a quick shot at gold. Other than that, unless a bantamweight contender decides to opt for a move up 10 pounds, it’s a murky situation. Granted, Nunes hasn’t defended her bantamweight belt since late 2019, so perhaps that gives the situation at 145 pounds to stir up its next challenger. 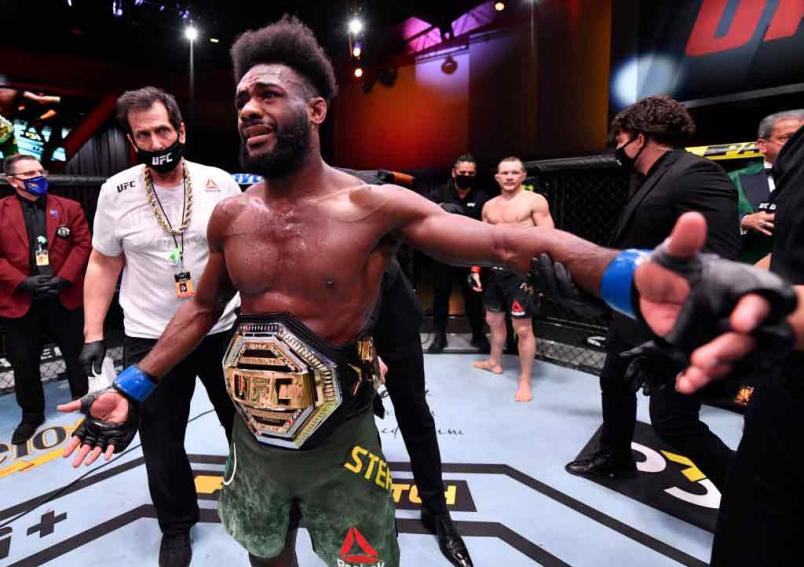 Aljamain Sterling reacts after his victory by disqualification over Petr Yan due to an intentional foul in their UFC bantamweight championship fight during the UFC 259 event on March 06, 2021 in Las Vegas, Nevada. (Photo by Jeff Bottari/Zuffa LLC)

Outlook: The bantamweight title continues to hold the crown as perhaps the most volatile throne in the UFC. Since 2016, five different fighters have held the undisputed title, matched only by the middleweight division. At UFC 259, we saw the first championship win via disqualification after Petr Yan – who seemed to have most of the momentum on his side - landed an illegal knee on the grounded Aljamain Sterling. So now, Sterling is the champion whether he wanted to take the belt that way or not, and he holds leverage as far as what comes next. It wasn’t his fault he was fouled, and so now his championship reign begins.

Common thinking is that he and Yan will run it back with perhaps more volatility behind the matchup than their first meeting, but bantamweight isn’t short of worthy challengers. Cory Sandhagen wants another crack at Sterling and has done nothing but put on spectacular performances since their fight at UFC 250. Henry Cejudo, despite retiring, has kept himself in the conversation online, semi-regularly teasing a comeback, including after the conclusion of the most recent title fight. TJ Dillashaw is in position to make a high-profile return that could launch him back into the conversation. That’s not even mentioning Rob Font and Cody Garbrandt, ranked third and fourth, respectively. The crop at 135 pounds is incredibly loaded with worthy contenders, and so what happens next will undoubtedly have a major impact on the trajectories of everyone in the division’s Top 10.

Outlook: The underdog got it done again. Jan Blachowicz did what no man has done in mixed martial arts: he defeated Israel Adesanya. Moreover, he did it in rather comfortable fashion. While the fight was competitive, the scorecards indicated a relatively clear win for the Poland native, so there is not another “champ champ” in the UFC for the time being. Blachowicz showed his whole game in the fight – quality Fight IQ, grappling and, of course, a little bit of that “legendary Polish power.” He turned his eyes rather quickly to the deserving Glover Teixeira for his next title defense. Beyond that, Aleksandar Rakic continues to climb the rankings and is on the edge of a title shot, and the impending fight between Dominick Reyes and Jiri Prochazka figures to play a big factor in the picture, as well.

For Adesanya, he took his first professional loss with the grace you’d hope to see from the previously undefeated superstar, and it appears that he’ll return his focus to defending his 185-pound throne. A clear-cut challenger hasn’t quite shown himself yet, although some would argue Robert Whittaker, having thwarted two would-be contenders in Darren Till and Jared Cannonier, has earned a rematch. A scheduled bout with Paulo Costa gives the Aussie a chance to make that picture even clearer, and until then, all “The Last Stylebender” needs to do is wait and see.