Take A Look At Where The UFC Light Heavyweight Division Stands A Stunning Result At UFC 283
By Zac Pacleb, on Twitter: @ZacPacleb • Jan. 24, 2023

The light heavyweight championship carousel spun once again in Rio de Janeiro as Jamahal Hill became the first fighter from Dana White’s Contender Series to capture UFC gold in a five-round war against Glover Teixeira. After the anticlimactic disappointment following the draw between Magomed Ankalaev and Jan Błachowicz, Hill’s victory gives some order to the 205-pound title picture.

With Teixeira retiring, as well, the top-5 has some opportunity to shuffle a little bit and continue turning its page to a newer generation of light heavyweight contenders. However, veterans still have plenty to say, and there is no shortage of title hopefuls hoping to turn Jamahal Hill’s “Sweet Dreams” into a nightmare.

This is where we stand in the light heavyweight division: 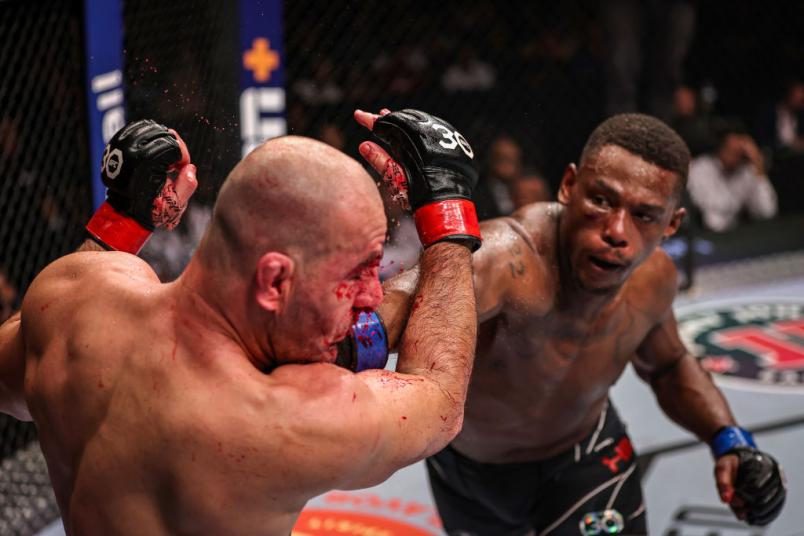 Outlook: “Sweet Dreams” answered myriad questions about himself with his clean-sweep victory over Teixeira in Brazil. He showed he can go five rounds, he showed he has good-to-great defensive grappling, and he showed the mental fortitude necessary to earn UFC gold. Now at the top, a trio of challengers stand out: Prochazka, Ankalaev and Błachowicz. Prochazka already laid down the gauntlet on social media, and Hill previously said he “needs” to share the Octagon with the former light heavyweight champion once healthy. Ankalaev and Błachowicz each deserve a shot, as well, but it is all up to Hill in terms of who gets the first shot and everything that happens afterward. 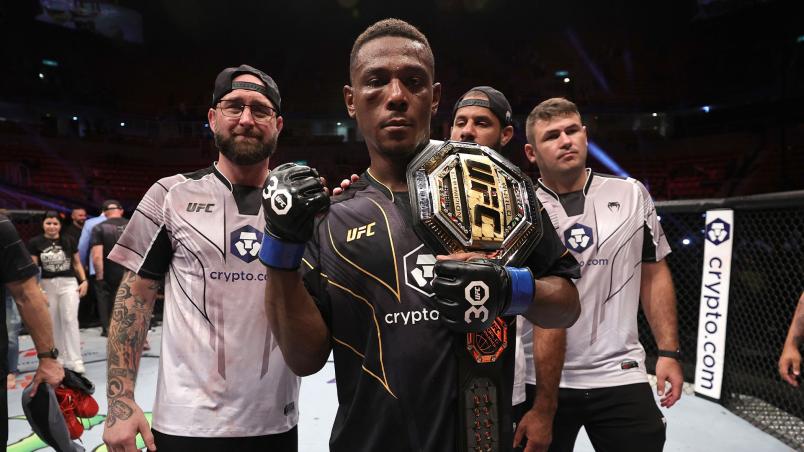 Jamahal Hill reacts after his victory over Glover Teixeira of Brazil in the UFC light heavyweight championship fight during the UFC 283 event at Jeunesse Arena on January 21, 2023 in Rio de Janeiro, Brazil. (Photo by Buda Mendes/Zuffa LLC)

Outlook: Still on the mend from a brutal shoulder injury sustained toward the end of 2022, Prochazka looms large in the title picture. The general belief is that “BJP” will get a crack at regaining his title as soon as his health allows. The original diagnosis appeared to set Prochazka’s timeline for return toward the second half of 2023, but Prochazka shared his belief that he will return by August. Regardless, a title shot is coming for Prochazka whenever he feels ready to return.

Outlook: Ankalaev felt a little shorted when judges ruled his title fight with Błachowicz as a split draw, but he is very much in the mix for another shot at gold sooner than later. He revealed some injuries sustained ahead of and in his fight at UFC 282, and given the current status of Prochazka, he could be forced to wait or fight someone in the meantime. He and Błachowicz could run it back to sort out the queue, or he could welcome Aleksandar Rakić back from his knee injury. 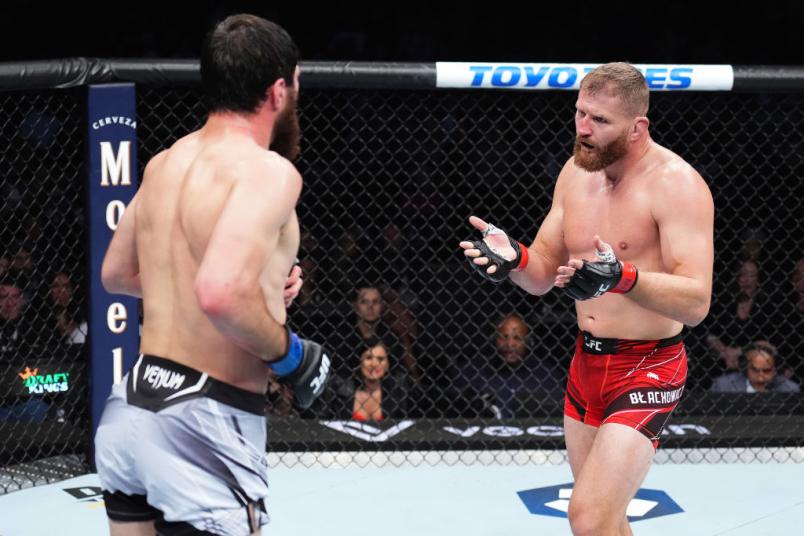 Jan Blachowicz of Poland interacts with Magomed Ankalaev of Russia in their UFC light heavyweight championship fight during the UFC 282 event at T-Mobile Arena on December 10, 2022 in Las Vegas, Nevada. (Photo by Chris Unger/Zuffa LLC)

Outlook: Although Błachowicz didn’t feel like he beat Ankalaev, he did say he felt like he did not lose, either. Given the result of the draw, Błachowicz likely needs a win to get a chance at regaining the belt he once held. Whether that’s through a rematch with Ankalaev or against someone like Anthony Smith is unknown, but “The Legendary Polish Power” always gives Błachowicz a chance at the title. 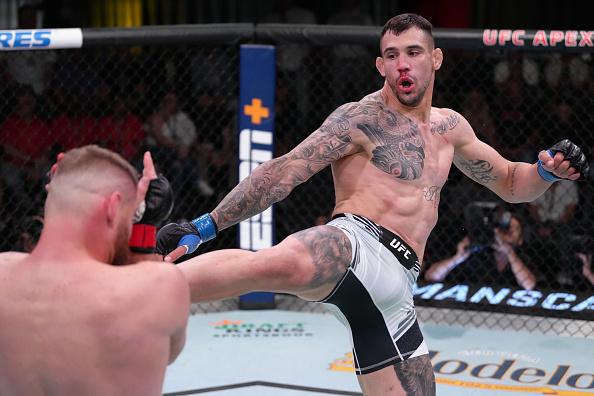 Aleksandar Rakic of Austria kicks Jan Blachowicz of Poland in a light heavyweight fight during the UFC Fight Night event at UFC APEX on May 14, 2022 in Las Vegas, Nevada. (Photo by Jeff Bottari/Zuffa LLC)

Outlook: Rakić is still in the midst of the recovery process after sustaining a torn ACL in his bout against Błachowicz in May 2022. The kind of fight he gets in his return will determine the path he has back to title contention. He could fight down against someone like Nikita Krylov or Ryan Spann or look up toward Ankalaev if Ankalaev is interested in that matchup. Anthony Smith, whom Rakić beat in 2020, has made it clear he wants that fight back, as well. 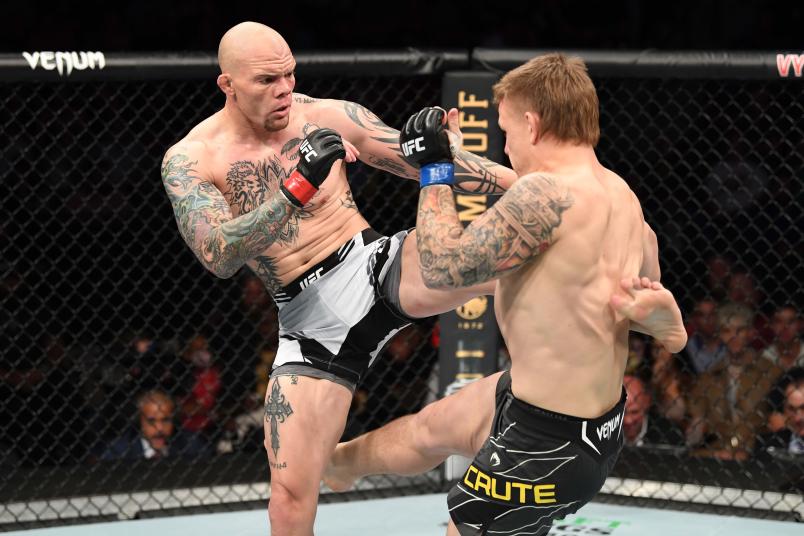 Outlook: “Lionheart” was the real loser in the chaos of the Hill-Teixeira matchup being made after UFC 282. Originally scheduled to fight Hill in March, he instead found himself helping Hill prepare for Teixeira. The veteran stumbled when he suffered a broken ankle against Ankalaev, but to that point, he had proved he is worthy of fighting for the title a second time. He made it clear he’d like to fight Rakić again, but a fight against Błachowicz also makes sense. If he is forced to fight down the rankings again, Johnny Walker makes for an intriguing matchup. 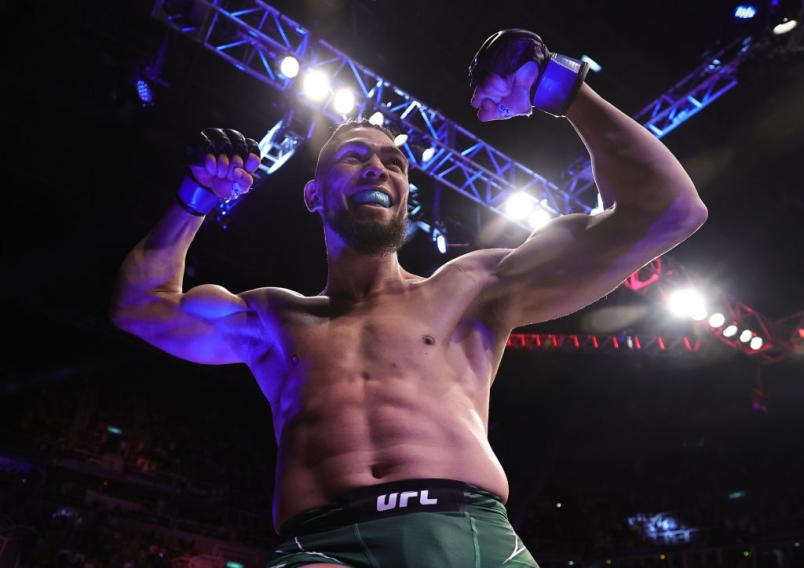 Johnny Walker of Brazil reacts after his knockout victory over Paul Craig of Scotland in a light heavyweight fight during the UFC 283 event at Jeunesse Arena on January 21, 2023 in Rio de Janeiro, Brazil. (Photo by Buda Mendes/Zuffa LLC)

Outlook: Krylov, who has consistently hung around the top-15, picked up a nice pair of wins against Alexander Gustafsson and Volkan Oezdemir to create some good momentum for himself in 2023. Ryan Spann also surged into 2023 in good form after submitting Ion Cutelaba and knocking out Dominick Reyes, both in the first round. Walker, meanwhile, bounced back from his knockout loss to Hill with a pair of finishes against Cutelaba and Craig. Each man is worthy of a shot at the top-5, but they also might need to fight someone in the back half of the rankings with most of the top-5 in a spot where they could wait for a fight that more clearly positions them for a title shot.