Where We Stand Bantamweight | November 2021

More or less, we are right back to where we started in the bantamweight division after Petr Yan captured the interim bantamweight title at UFC 267. The rematch against Aljamain Sterling is inevitable, and as always is the case in perhaps the promotion’s most exciting weight class, a shark tank’s worth of contenders is waiting eagerly for championship business to be handled. 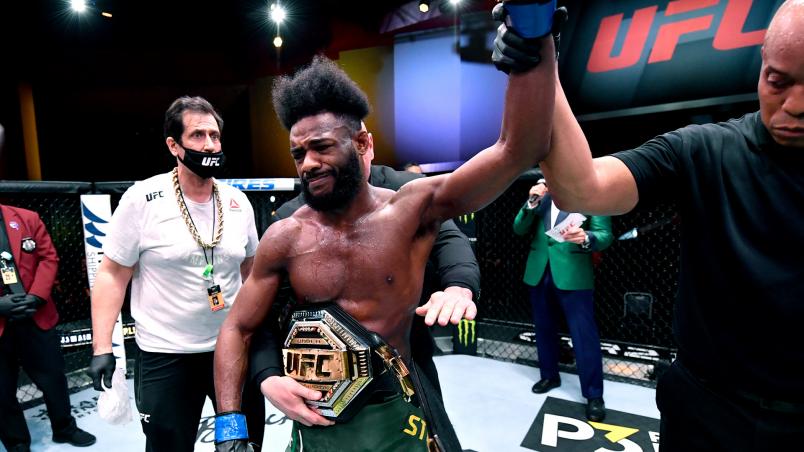 Aljamain Sterling reacts after his victory by disqualification over Petr Yan of Russia due to an intentional foul in their UFC bantamweight championship fight during the UFC 259 event at UFC APEX on March 06, 2021 in Las Vegas, Nevada. (Photo by Jeff Bott

Outlook: “Funkmaster” found himself in a precarious position after Yan hit him with an illegal knee in March. And though he won the belt, many felt like the tide was turning the other way, so his title reign has been rocky to say the least despite not fighting. Sterling has needed time to recover from neck surgery, but eventually, he’ll defend his belt against Yan in a rematch. Given everything that’s happened the last 10 months, it’s easy to forget Sterling is on a five-fight winning streak against the best in the division, so while the way he won the belt is a little hard to accept, it’s clear that he is absolutely a championship-caliber fighter.

Outlook: “No Mercy” looked like his best self against Sandhagen. He made reads early as his opponent uncorked his best shots, and as the fight wore on, Yan imposed himself more and more. The Russian was on his way to defending his belt against Sterling before that fateful knee, so some saw the interim fight as another notch in his title reign. He needs to unify the belt against Sterling to continue that, which is easier said than done. However, Yan has looked like one of the most menacing and technically beautiful fighters in a division full of them, and at just 28 years old, he could be on his way to building quite a legacy for himself. 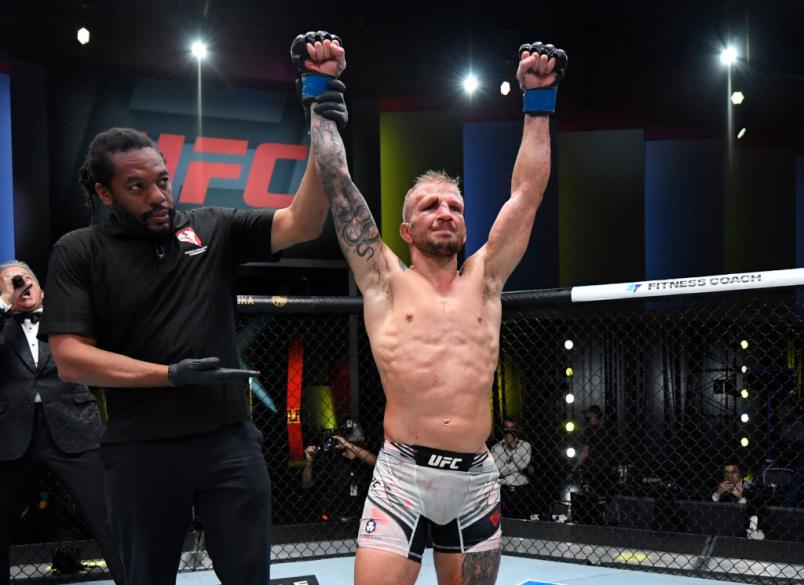 Outlook: After returning from his two-year suspension, TJ Dillashaw put himself right back into the title picture with a hard-fought win over Cory Sandhagen. He could’ve found himself in the interim title fight spot had he been healthy, but he’ll need to find another way to a chance at gold once healthy. The division looks vastly different than the one Dillashaw reigned over a couple of years ago, but the 35-year-old showed he is absolutely still one of the best 135ers in the world. Whether it’s a fight against the winner between Rob Font and Jose Aldo or just waiting and seeing if he can step in against the winner of the unification bout, Dillashaw is very much in the immediate picture heading into 2022. 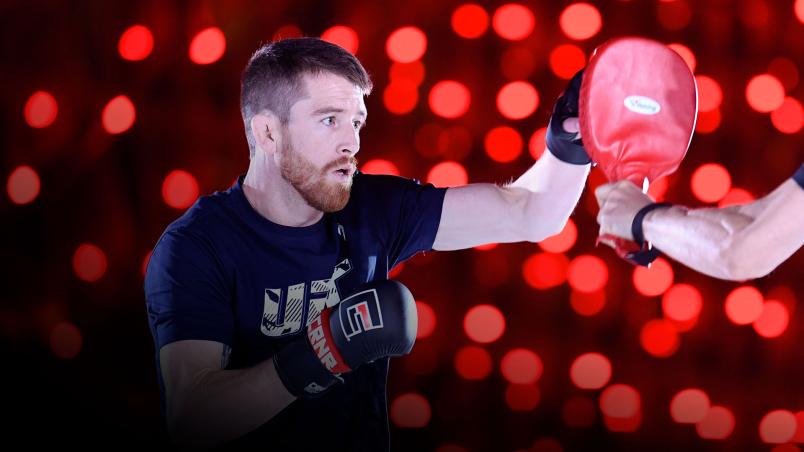 Outlook: Not many people scoffed at Sandhagen’s interim title shot despite coming off a loss to Dillashaw in the summer. Many felt he did enough against the former champ to get the judges’ nod, so the interim shot wasn’t really out of pocket. He showed his quality in the first round against Yan, earning the nod from each judge for the first frame, but he wasn’t able to sustain the output and effectiveness for all 25 minutes. Because of his high-profile finishes of Marlon Moraes and Frankie Edgar, one can forget Sandhagen only came onto the scene in January 2018. In the last year, he has fought the cream of the crop with some mixed results, but he hasn’t ever looked out of his depth, especially after suffering a submission loss to Sterling. That fight prompted some mental shifts in his approach, and Sandhagen has looked like a title contender since. Where he goes from here depends on a few results, namely in the Aldo-Font matchup, but Sandhagen remains right in the thick of things. 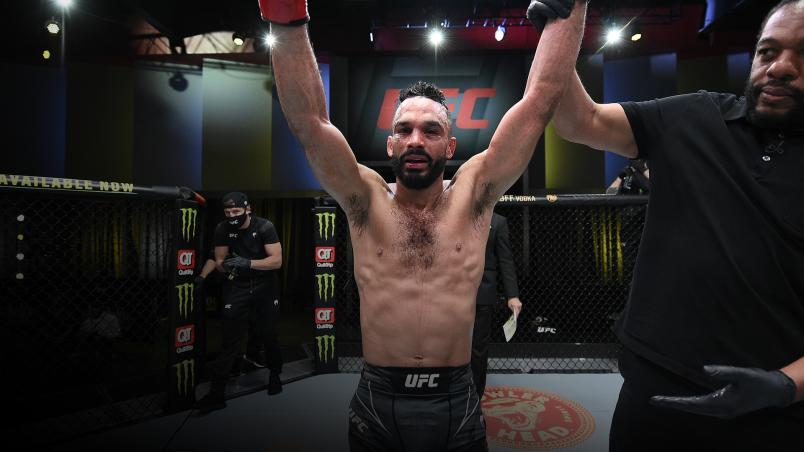 Rob Font reacts after defeating Cody Garbrandt in their bantamweight bout during the UFC Fight Night event at UFC APEX on May 22, 2021 in Las Vegas, Nevada. (Photo by Chris Unger/Zuffa LLC)

Outlook: With a crisp jab and solid defensive grappling, Font looked every bit the elite bantamweight in his first main event against Garbrandt. The win was Font’s fourth in a row, and he can announce himself as the next title challenger to the winner of Sterling-Yan with a victory over former featherweight king Jose Aldo. The matchup is his second straight main event, and it’s clear what opportunity is presented for the New England Cartel leader. 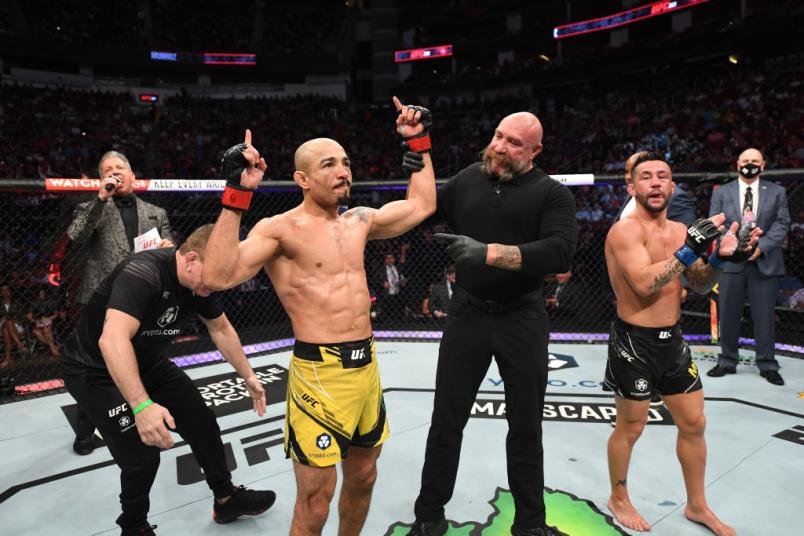 Outlook: At 35 years old, Aldo looked sharp as ever against Munhoz. His defensive abilities put Munhoz’s attack in shambles as he picked apart his fellow Brazilian, and now, with a fight set against Rob Font, Aldo isn’t too far off from another chance at another belt. Getting past Font might not mean a title shot, but it does set him up against a lot of the bantamweights he has yet to face like Sandhagen or Dillashaw. His name remains one of the biggest in the sport, and he is continuing to show he is much more than a legend of a past era.

Outlook: The fight few want to take is certainly Merab Dvalishvili, who showed his toughness and relentlessness in his comeback win over Marlon Moraes. The Georgian wrestling ace is a nightmare matchup for almost anyone at 135 pounds, so it’ll be interesting to see what kind of path he carves to the Top 5 because he is certainly deserving of a shot at that crop.

Although the rest of the bantamweight division is as talented as ever, younger contenders continue to thwart each other around or below the Top 10, which means veterans like Frankie Edgar and Pedro Munhoz remain in their spot even after stumbling against Top 5 fighters. They’ll need to weather those oncoming youngsters for their next few fights before turning their attention upwards once again. The real winner continues to be fight fans as the best 135-pounders almost always put on high-level, action-packed fights each time out.