Former Hockey Player Has Stayed Patient In Waiting For The Call From The UFC
By Thomas Gerbasi, on Twitter: @TGerbasi • Jun. 12, 2020

Did you ever hear the old phrase, I went to a hockey game and a fight broke out?

Former hockey player Christian Aguilera has. But he promises that a hockey game won’t break out in the middle of his fight with Anthony Ivy on Saturday in Las Vegas.

And for the record, fighting was his favorite part of his time on the ice, so making the move to MMA was no big stretch for him.

“When I was growing up, I did a little bit of taekwondo and I was always obsessed with fighting and obsessed with boxing,” he said. “My favorite part about hockey was fighting. Yeah, we'll score goals and do all that, but as soon as I got to scrap with someone, it was fun. So it was a pretty easy transition. The cardio was the biggest aspect because MMA cardio is not like anything else. But as far as the aggression, the getting punched in the face, getting hit, hockey's a violent sport so we're getting hit all the time and getting hit with objects, so if you can only hit me with your feet and hands, that's fine.”

Whittier, California native Aguilera, who played at the Northwood School in Lake Placid, New York for two years, had ambitions to play college hockey and then make it to the NHL, but as he says, “It just didn't pan out, so now we're here.”

Well, even getting to the point he did must have meant that he was good, right?

There are no regrets from the 28-year-old, though, because he’s pulled off that rarest of athletic feats in having a second act in a completely different sport. Not that it’s been easy, but Aguilera did know from the time he made his pro MMA debut in 2013 that while he had the potential to make it to the UFC, it wasn’t going to be a straight road or a quick one.

“You just gotta be patient,” he said. “It was never really an option in my head. I knew I was gonna get here at some point; it's just how long it's gonna take, how many ups and downs you're gonna have. But it was never a question of if, it was more of a when. Yeah, we have our ups and downs in the sport, but I kept grinding and my coaches stayed with me and were ride or die with me. So as long as I've got them in my corner, and a good management team, it's gonna happen. You just gotta keep performing and put everything together.”

Aguilera has done his part, compiling a 13-6 record that includes 10 knockouts and a two-fight winning streak. And after his January LFA win over Glaucio Eliziario, he believed his time was coming to compete in the UFC. Of course, the COVID-19 pandemic slowed life down for everyone, but as he checked out the MMA landscape, he knew it was a good idea to stay in shape in case a knock on the door changed the trajectory of his career. 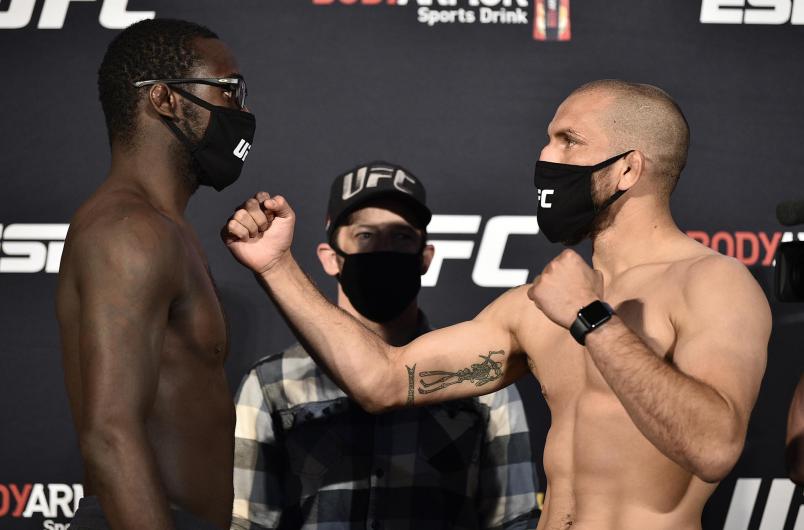 “I figured I was right on the cusp of it (getting to the UFC) after my last two fights,” said Aguilera. “I was hoping for a Contender Series spot or a last-minute fight, and I knew a lot of guys were dropping out of cards, so my coach said to get ready and we kept training and never stopped. Then it just came up.”

It doesn’t hurt the Team Oyama squad has been busy since the UFC returned in May, so Aguilera has been able to get in solid work in the lead-up to his debut against Ivy.

“We had Frank Camacho at the gym, too, so I was helping him with his camp by giving him some looks for his next fight, so we were kind of going through camp together and that definitely helped out a lot.”

I don’t know how, considering that Camacho – who fights Matt Frevola next week – is the nicest guy in MMA. How do you get your game face on sparring with him?

“When he punches you in the face a bunch of times...” said Aguilera, knowing that he didn’t need to finish the sentence.

Understood. But about that fight at the Apex, there will be no hockey references from “The Beast.”

“I like to make an exciting fight,” he said. “I like to keep it on the feet, I like to stand and bang and, obviously, I like to knock people out, so wherever the fight goes, we're confident. I'm just gonna stay in his face for the entire 15 minutes and push the pace and then hopefully at some point get a stop.”