What Yair Rodriguez Wants With All His Heart

Surrender Is Not An Option For Fan Favorite As He Returns To Face Max Holloway
By Thomas Gerbasi, on Twitter: @TGerbasi • Nov. 10, 2021

Former UFC featherweight champion Max Holloway isn’t the kind of fighter you want to test out your theories on ring rust against, but with his main event against “Blessed” just days away, Yair Rodriguez is prepared to find out whether two years on the sidelines has helped or hurt him.

And the Mexican battler is confident that in his first fight since an October 2019 win over Jeremy Stephens, he won’t just be the old Yair, but a new and improved version.

“When I was off, I was able to work on a lot of things, not only physically, but mentally and spiritually,” said Rodriguez, who dealt with injuries and a six-month USADA suspension since his rematch with Stephens. “It was like a journey for me. And especially with the pandemic going on and all the stuff that happened during this time, it’s been a time of growth for me. The sky’s the limit when you truly believe it.”

Rodriguez believes it, and at 29, he’s still young enough to reap the benefits of youth and the talent that led him to the number three spot in the 145-pound rankings. Yet despite owning wins over the likes of Stephens, BJ Penn, Chan Sung Jung, Alex Caceres and Dan Hooker, fighting Holloway is an entirely different ballgame, and “El Pantera” knows it.

“I know Max held the belt for a long time and he’s one of the best fighters in MMA history,” admits Rodriguez, who is unbeaten in three straight since the lone loss of his UFC career against Frankie Edgar in May 2017. “Fighting against him takes me to that next level where I need to be to become a champion. I have fought against former champions before, but I wasn’t at a point in my mind where I was mature enough. Now I’m getting to the point where I’m mature enough, and I can take opportunities like this and take advantage of them.”

Against Edgar, Rodriguez wasn’t ready for the pressure and ground attack of the former lightweight champ and he ended up losing via doctor stoppage after two rounds. His return a year-and-a-half later against Jung was one of the best fights of 2018, but it was also one in which he trailed on the scorecards before delivering a highlight reel knockout with a second left on the clock in the fifth and final round. And while he settled a score with Stephens after a no contest in their first bout, the rematch was a close one ending up with Rodriguez earning 29-28 scores across the board.

So maybe two years away would hurt most fighters, but it could be the break Rodriguez needed.

“I’m really hungry to get back in there,” he said. “It’s been two years, and I tried to get back there before but there was other stuff stopping me from doing it, and now I have the opportunity to do it and face somebody like Max Holloway. It’s a big step up for me and it’s like a new chapter in my life and my career.”

If Rodriguez has his way, it will be a chapter that will begin with either his fifth Fight of the Night bonus, or fourth Performance of the Night check. The Parral native is leaning towards the former.

“I expect this to be a war,” he said. “I am sure that Max Holloway is bringing nothing but fire, and he can be sure that I’m doing the same. It’s a game of styles.”

And the styles of these featherweights have led to heightened excitement levels from fans who are not worn out by the epic battles of the last two weeks. But Rodriguez does see where he can beat the former champ. 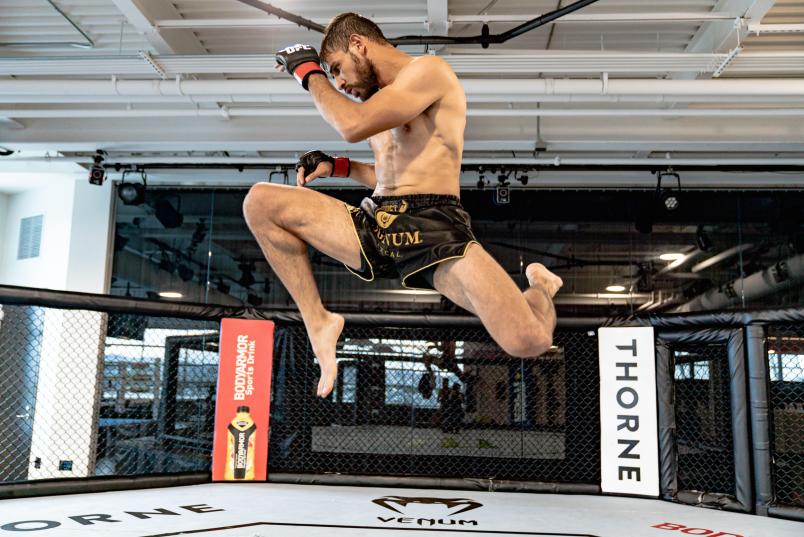 Rodriguez at the UFC Performance Institute in Las Vegas, training for Holloway

If he does, Rodriguez may be starting off 2022 with a shot at Alexander Volkanovski’s featherweight title. He’s not looking that far ahead, though, because without a win on Saturday, none of that speculation can become reality.

“I want to win my next fight,” he said. “That’s all that I want for now, and I think everything will fall into place whenever the time comes, But for now, the only thing that’s on my mind is winning against Max Holloway.”

“I want this win with all of my heart,” said Rodriguez. “I’ve been working really, really hard to get it, and he’s gonna have to kill me to get the win. I’m not gonna surrender.”