Sodiq Yusuff did the consistent work, and he's now seeing the fruits of that labor.
By Zac Pacleb, on Twitter @ZacPacleb • Mar. 31, 2020

Sodiq Yusuff’s journey to mixed martial arts started relatively early, and so did the process of convincing his mother of his career choice. As a big fan of anime and superheroes, Yusuff gravitated toward MMA quickly, telling people he was UFC-bound from as early as his days in middle school.

As far as easing a parent’s worried mind, Yusuff laughed as he compared the slow-burning process to the movie Inception.

“You just gotta sprinkle the thoughts in their head,” Yusuff said. “So, as I was growing up, I talked about it so much that I slowly kind of drove her into being OK with it. I’ve always been talking about it.”

Although Yusuff successfully played the long game, things came to a head once he got to college in Maryland. He said that he only went to college to please his mother, and he never declared a major. Yusuff mentioned he took a liking to his communications class because of the professor, but then realized people joked about it being the major people who “don’t know what they want” usually choose. Instead, he dropped out during his second semester and talked to his mom.

“I had a sit-down with her,” he said. “I had to tell her, ‘Hey, you know me better than anyone else. I’m going to give this my all, and I can always go back to school. If this doesn’t work out, I’ll go back to it and get whatever degree you want, but I have a short window of my life to actually chase this dream.’”

Eventually, his mom relented and, since then, Yusuff’s career has been a well-paced climb to the top. After earning a UFC contract in an entertaining bout against Mike Davis on Dana White’s Contender Series, Yusuff is undefeated through his four bouts with the promotion. As far as how his mom is handling things, it seems like she caught the MMA bug as well, and occasionally, Yusuff posts a video of her training in the gym.

Recently, Yusuff scored a unanimous decision victory over Andre Fili, someone Yusuff held in high regard and said he had watched for a long time before their bout. The win landed him in the top 15 for the first time.

“It’s like a steady progression,” Yusuff said. “The career is kind of going the same way as I’ve always envisioned it. It’s not too fast, but it’s definitely not slow. I’m getting good spotlights on me. I’m getting good, solid wins under my belt, so there’s nothing I can criticize about it.” 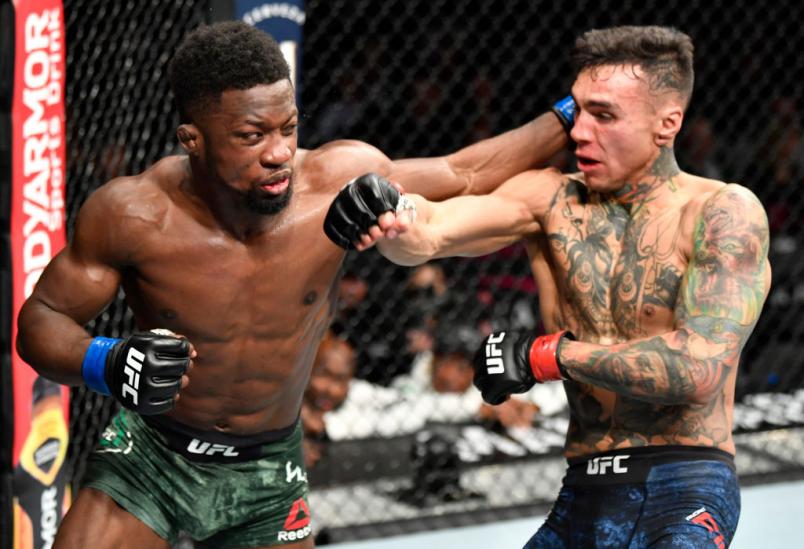 After the fight, the Nigerian-born Yusuff was most excited about his mother and brother earning their U.S. citizenship, saying they all celebrated the accomplishment after the fight. Now, he’s working on getting his siblings their visas, which is no easy task given the COVID-19 pandemic as well as the fact that he has sixteen siblings that are “scattered all over the place.”

Yusuff said he first came to America when he was nine, but the transition “wasn’t that strange” because Nigeria’s official language is English. He did, however, have to grow up quickly. While he grew up with plenty of brothers and sisters around as the second youngest, only he and his younger brother accompanied his mother to America.  Since he started making money fighting, Yusuff sent his family in Nigeria most of his earnings.

“It was a bit lonelier I guess,” Yusuff said. “Because I was second to the last, I had so many older brothers and sisters to protect me. Now, you gotta be the protector of your little brother. That was a big thing, too. I had to stop being the baby and kind of grow up.”

What resulted is the cool, composed person Yusuff is today. His demeanor in the Octagon is often stone cold and locked in, and he admits that he often doesn’t really remember what happens in his fights until he’s back in the locker room. 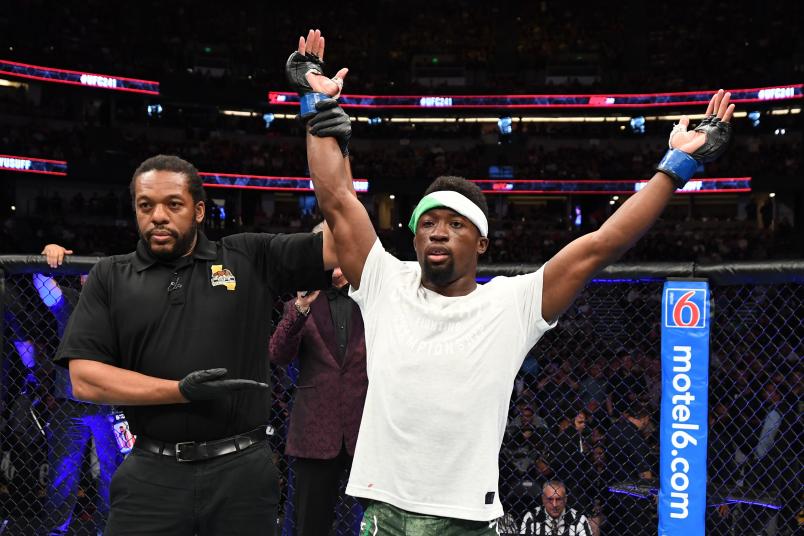 ANAHEIM, CALIFORNIA - AUGUST 17: Sodiq Yusuff of Nigeria celebrates his TKO victory over Gabriel Benitez of Mexico in their featherweight bout during the UFC 241 event at the Honda Center on August 17, 2019 in Anaheim, California. (Photo by Josh Hedges/Zu

That approach has been a successful one, though. Primarily known as a striker, he showed off a well-rounded game against Fili, at times relying on his wrestling and grappling acumen to pull away on the judges’ scorecards. His ability to endure adversity over long periods of time is what Yusuff says is his biggest advantage.

That trait is something Yusuff didn’t realize was a special one until more people asked him for advice as he rose up the rankings.

As people came to work with him or even just watch him train, he took note of the fact that, while most people can work hard in bursts, his ability to maintain that high work ethic over a long period of time is something that sets him apart.

“They’re like, ‘Oh, this doesn’t look special. This looks regular,’” he said. “But they don’t realize that ‘regular’ thing, doing that consistently and consistently and consistently, by the time you get to fight time, you might not get a jumping roundhouse kick, or you might not get a flying knee to the face. It might just win you the fight by one extra punch or it might win you the fight by one takedown or stuff like that. That’s how it manifests itself in the fight, and it’s hard for people to see, and it’s hard for people to really put much stock into.”

While Yusuff’s work rate and demeanor in training and the Octagon show one side of the 26-year-old, it’d be a mistake to think that’s how he is at all times. It only takes a few minutes before Yusuff’s loud laugh comes through and he gets on a roll about his passions.

One of those passions is food, particularly ice cream. He’s been known to scroll through different food accounts on Instagram while he cuts to 145 pounds, which might seem backward to some. Instead, he finds comfort in looking forward to his post-fight meal. It hasn’t presented any problems, either. Yusuff hasn’t ever missed weight, and although he said he assumes he’ll move up to lightweight when he gets closer to the end of his career, he has every intention to stay at featherweight for as long as he possibly can.

Another major interest of his is anime, saying it caught his attention when he was younger. He said Fullmetal Alchemist: Brotherhood and Hunter x Hunter are his favorites, and he’s happy to see anime as a whole become more popular in the mainstream culture. Yusuff is happy to go down the vast rabbit hole that is the anime culture, but he also is aware that it might seem “dorky” to other people.

“They’re like, ‘Dang, this is what I’ve been missing out on?’” he said. “But I understand. A lot of us anime fans, we don’t represent ourselves too well when we start running down the hall. I used to hate – when I was in high school or middle school – and you see this kid Naruto running down the hallways, I’m like, ‘Man, y’all should stop this s*** so they can stop thinking we’re not cool.” 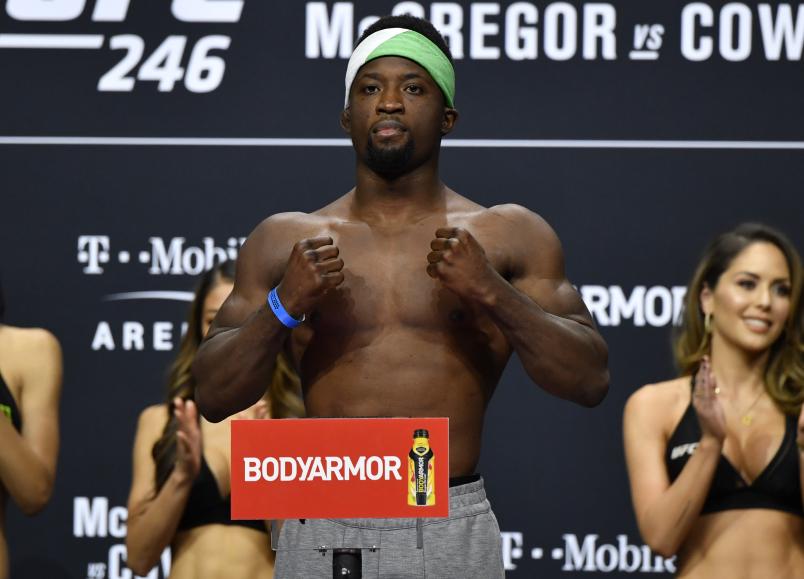 LAS VEGAS, NEVADA - JANUARY 17: Sodiq Yusuff of Nigeria poses on the scale during the UFC 246 weigh-in at Park Theater at Park MGM on January 17, 2020 in Las Vegas, Nevada. (Photo by Jeff Bottari/Zuffa LLC)

Before Adesanya took the undisputed title with a second-round knockout over Robert Whittaker at UFC 243, the Nigerian-born New Zealander mimed writing something in a notebook before putting it away as he was introduced by Bruce Buffer. After the fight, he said it was a reference to Death Note, a popular anime about a high-school student who discovers a supernatural notebook that grants its user the ability to kill.

“That Death Note thing that Izzy did, that was freaking dope,” Yusuff said. “The next day, I was at the gym, and everybody was like, ‘What’s Death Note?’ The first time I saw him do the Chidori in the middle – that’s a technique from Naruto, don’t worry about it - he does a lot of core s***. He represents it for the anime culture, heavy.”

Even though Yusuff’s coaches try to coax him into doing something similar, don’t expect it any time soon. Yusuff laughed at the idea and said he leaves the references mostly for Instagram captions, but when it comes time to fight, he is too “in the zone.”

“(Adesanya) is real free-flowing, so he’s in there doing anime s***,” Yusuff said. “But when I’m in there, I’m locked in. Most of the time, I can’t even remember what the hell happened in my fight until it’s over. If you find me in a fight doing anime s***, that means I’m not ready to be fighting.”

So far, Yusuff showed up plenty ready for each of his ventures in the Octagon. Even though he doesn’t currently have a fight scheduled, he hopes to keep moving up the talent-rich division the same as he has thus far.

At the very least, Yusuff established that he is one of the more exciting, young featherweights on the roster, as well as the fact that he does have the goods to compete with the best in the world. As he keeps climbing, he invites fight fans to keep their eyes on him and his career.

“I don’t think there’s anything that I’m still trying to prove to people,” Yusuff said. “I just want people to just keep watching me on the journey. That’s all I really care about. As long as people are interested to see the journey through, the fake fans, the real fans, the real haters, the fake haters, it all means the same thing to me. As long as you’re just there to watch the journey, I’m cool.”