Werdum's coach on Mark Hunt: 'We want this fight' 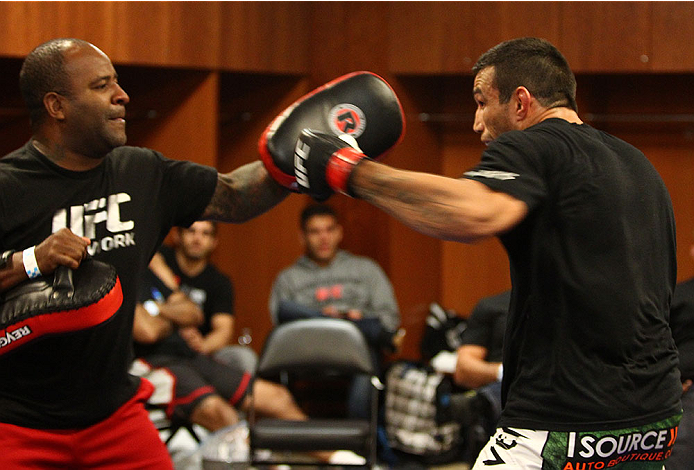 RIO DE JANEIRO - In the UFC, opportunities often present themselves in the midst of a setback.  UFC heavyweight champion Cain Velasquez will spend the next few weeks recovering from a knee injury sustained in training, rather than preparing to face No. 1 contender Fabricio Werdum for the title in Mexico City on Nov. 15.

Now Werdum (18-5-1, fighting out of Los Angeles via Porto Alegre, Brazil) will face a completely different challenge. New Zealand’s Mark Hunt (10-8-1 in professional MMA) will be his opponent in the five-round main event of UFC 180 at a sold-out Arena Mexico City, and the prize will be the interim UFC heavyweight crown.

That means fight preparation for the Brazilian jiu-jitsu specialist suddenly takes on a renewed sense of urgency.

Hunt’s renowned striking ability will require Werdum to adjust his training. But Werdum’s head coach Rafael Cordeiro said he and his fighter see a spectacular matchup ahead against Hunt, and the Brazilian will be ready for whatever attacking skills Hunt brings to this matchup.

“I wish all the best for Cain Velasquez, but we want this fight,” Cordeiro said Tuesday in an exclusive interview in Rio de Janeiro with UFC.com and UFC.com Brazil.  “It’s a big challenge for us. We look forward in the future, if Fabricio beats Mark Hunt, that we’ll have the opportunity to fight Cain. Because that would be awesome.”

The news of Velasquez’ training injury broke late Tuesday, leaving Werdum and his coach scrambling to quickly adjust their regimen.

“It was a surprise for me, but this is MMA. Full contact, all the time, so there can be a lot of injuries,” Cordeiro said. “It’s a chance to fight for the belt, so it’s very important for us. Just because it’s a change in opponent, it doesn’t mean it’s a change in our mentality or our focus toward winning the belt.

“We respect Mark Hunt, a lot. He fought in PRIDE back in the day, fought against Wanderlei (Silva), and those were some of the best fights back then. So it’s a big one, to have the opportunity to fight Mark Hunt.”

So what will change in Cordeiro’s training preparation for Werdum vs. Hunt? Actually, not much at all. The emphasis on defense against a powerful striker may be more pronounced.

“He’s going to shock the world again.  Maybe it will be a Muay Thai fight; maybe it will be a jui-jitsu fight, you never know. (Werdum) is just a really good MMA fighter, and anything can happen.”

To acclimatize himself for UFC 180, Werdum has spent the past two months training in the high altitude town of Jiquipilco (8,771 feet), which is about one hour, 45 minutes from the equally lofty confines of sprawling Mexico City. Now he’ll simply add punching and striking to his arsenal, Cordeiro said.

“We know Fabricio has more skills on the floor, and he knows the best way to beat Mark Hunt is on the floor,” said Cordeiro, who is in Rio de Janeiro with Beneil Dariush in advance of UFC 179 on Saturday. “But it’s hard to put this (advantage) in Fabricio’s mind, because he likes to challenge himself. He’s going to prove to the world that he’s the real champ, and he is ready for the belt.

“When you are ready for the belt, you fight the opponent that is put in front of you.”

But while Cordeiro will be working hard to get Werdum ready for his title shot, he has tremendous empathy for Velasquez, a great fighter whose career has been derailed by injury twice in the last 12 months.

Velasquez has not fought since his fifth-round TKO victory over Junior Dos Santos on Oct. 19, 2013, and the knee injury figures to keep him out of the Octagon for several more months.

“It’s hard when you have an injury and you’re forced to stay out for a while,” Cordeiro said. “By the time he returns from this knee injury, it could be a year and a half out for him.  That is very hard, and it is something I wouldn’t wish for anybody because it can happen with anyone in the sport.”