Werdum wants to add another belt to his collection

Fabricio Werdum has been around the game too long and accomplished too much to mince words when it comes to his motivations for making the quick turnaround to face Marcin Tybura this weekend in Sydney, Australia.

“I want my opportunity for the title shot; this is my big goal,” said Werdum, who replaced Mark Hunt in the main event just days after earning a first-round submission win over Walt Harris at UFC 216 in Las Vegas. “I have two belts in my home and I want to put one more on my wall.”

For the last 18 months, the 40-year-old Brazilian has been haunted by his performance against Stipe Miocic at UFC 198.

Held in front of a massive partisan crowd at Arena da Baixada in Curitiba, Brazil, Werdum entered as the undisputed UFC heavyweight champion and arguably the greatest heavyweight of all-time.

In the four years since he returned to the Octagon, the Porto Alegre native had been perfect, collecting six consecutive 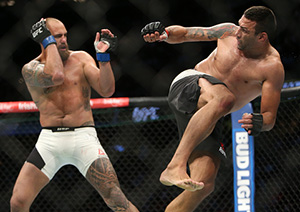 Travis Browne during the UFC 203 event at Quicken Loans Arena on September 10, 2016 in Cleveland, Ohio. (Photo by Rey Del Rio/Getty Images)" align="left" /> victories, including a second-round stoppage win over Hunt to claim the interim heavyweight title and a third-round submission finish over Cain Velasquez to unify the belts and stand alone atop the weight class seven months later. But against Miocic, he lost focus and ended up losing the title as a result.

He’s been on a quest to secure a rematch with the Ohio native ever since.

“I know if I fight with him again, I know I beat him,” Werdum said of Miocic, who has successfully defended the heavyweight title twice since their May 2016 encounter. “The last time when I fought with Stipe Miocic, I was very excited for that and I lost my focus.

“I bought 250 tickets for my friends in Brazil. I have a lot of friends in Brazil and I lost my focus this time. I just want one more opportunity and I’ll show the world again that I am the best heavyweight ever. This is my big goal. I’m a jiu-jitsu champion, ADCC champion, UFC champion and I know I can do it again.

Right now, the path to a potential rematch with Miocic goes through Sydney and a date with Tybura, a surging 31-year-old with championship experience from his days competing outside the UFC who has collected three straight victories to climb to No. 8 in the heavyweight rankings.

It’s a high risk, low reward assignment for Werdum, but he knows that the best way he can make a case for another title shot is to continue stepping into the cage and stacking up victories as often as he can.

“I think I deserve a title shot because of everything in my career,” said the Brazilian standout, who boasts one of the most impressive resumes in the heavyweight division. “It’s not just about now, the last victory. I started when I was 20 years old and today I’m 40 – that’s 20 years of history. I have a lot of fights. I deserve it for everything. I want one more opportunity, for sure.

“If the UFC doesn’t give me the opportunity for the next one, I want to fight again, but I’m waiting for the title shot. I want Stipe Miocic again.”

As much as he has a rematch with Miocic on his mind, don’t think that means Werdum is taking Tybura lightly. 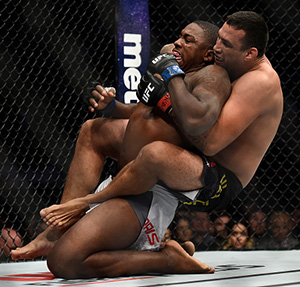 While he jumped at the opportunity to replace Hunt when the UFC came calling, the 40-year-old former champion knows his Polish adversary is a tough out and has nothing to lose when they step inside the cage this weekend. So although his end goal is getting to run it back with the champion one more time, his immediate focus is on taking another step towards making that dream a reality by picking up his second win in six weeks.

“I’m very excited – I fly to this amazing place here, I had good training, I have no injuries and I just keep enjoying it. I want to fight. This is my life. I love this. I love when I go inside the cage and fight.

“I want a nice fight, a very smart fight, but most important for me is the victory,” he said of this weekend’s contest. “For sure, I will try to knock him out, submit him, 100 percent. I want to finish the fight in the first minute, first round, second round – I’m going to try, but sometimes it doesn’t happen, you know? I can’t lose my strategy.

“I think I deserve the next one, but you have the (Alistair) Overeem and Francis (Ngannou) fight on December 2nd and I’m waiting for those guys,” said Werdum. “If they have an injury or something, I’ll fight versus Stipe Miocic, but the first thing is Saturday versus Tybura. I have Tybura on my mind now and after that, I’ll think about the next one.”