Brazil's Fabricio Werdum became the fifth interim heavyweight titlist in UFC history Saturday night at the Arena Ciudad de México in Mexico City, surviving some early trouble against Mark Hunt to put the New Zealander down with a knee to the jaw that was followed by ground strikes which brought a halt to the UFC 180 main event via second-round TKO.

“I know he was very strong, very tough, he punched me very hard, but I’ve been waiting for this moment,” Werdum said.

The bout came together after the headliner in the UFC’s first event in Mexico, UFC heavyweight champion Cain Velasquez, suffered a knee injury and was forced to withdraw, opening the door for Hunt to come in on short notice and nearly pull off the upset.

Much of the opening minute saw a few range-finders from both men, but the first serious shot from Hunt – a right hand – put Werdum on the canvas. Hunt didn’t follow, allowing the Brazilian to get back to his feet, and a few moments later, Werdum attempted a takedown that was thrown off by the “Super Samoan.”

Midway through the round, Hunt got a takedown of his own, ending up in Werdum’s guard, not a place he wanted to be, but with a minute remaining, Hunt got back to his feet. A hard uppercut from the Sydney product followed, and Werdum had little in the way of response. 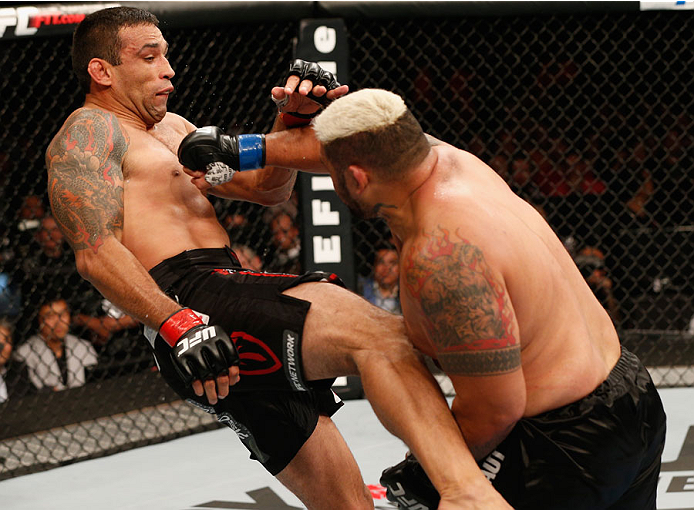 Another Hunt right hand put Werdum down early in round two, the Brazilian now digging himself a deep hole. Werdum tried to land with a couple head kicks to even the score, but they either missed wide or were blocked by the former K-1 Grand Prix champion.

Even Werdum’s takedown attempts were coming up short, but in this game it only takes one shot, and Werdum suddenly landed it, with a flush right knee to the jaw putting Hunt on the deck. A series of unanswered strikes followed, and when referee Herb Dean stepped in at the 2:27 mark, Brazil had its tenth UFC champion, and there will be a unification bout with Velasquez in 2015.

“I have a lot of respect for him,” Werdum said of Velasquez. “I want to have this fight here (in Mexico) or in Brazil.”

“It’s the one you don’t see, and that’s the one that got me,” Hunt said of the finish.