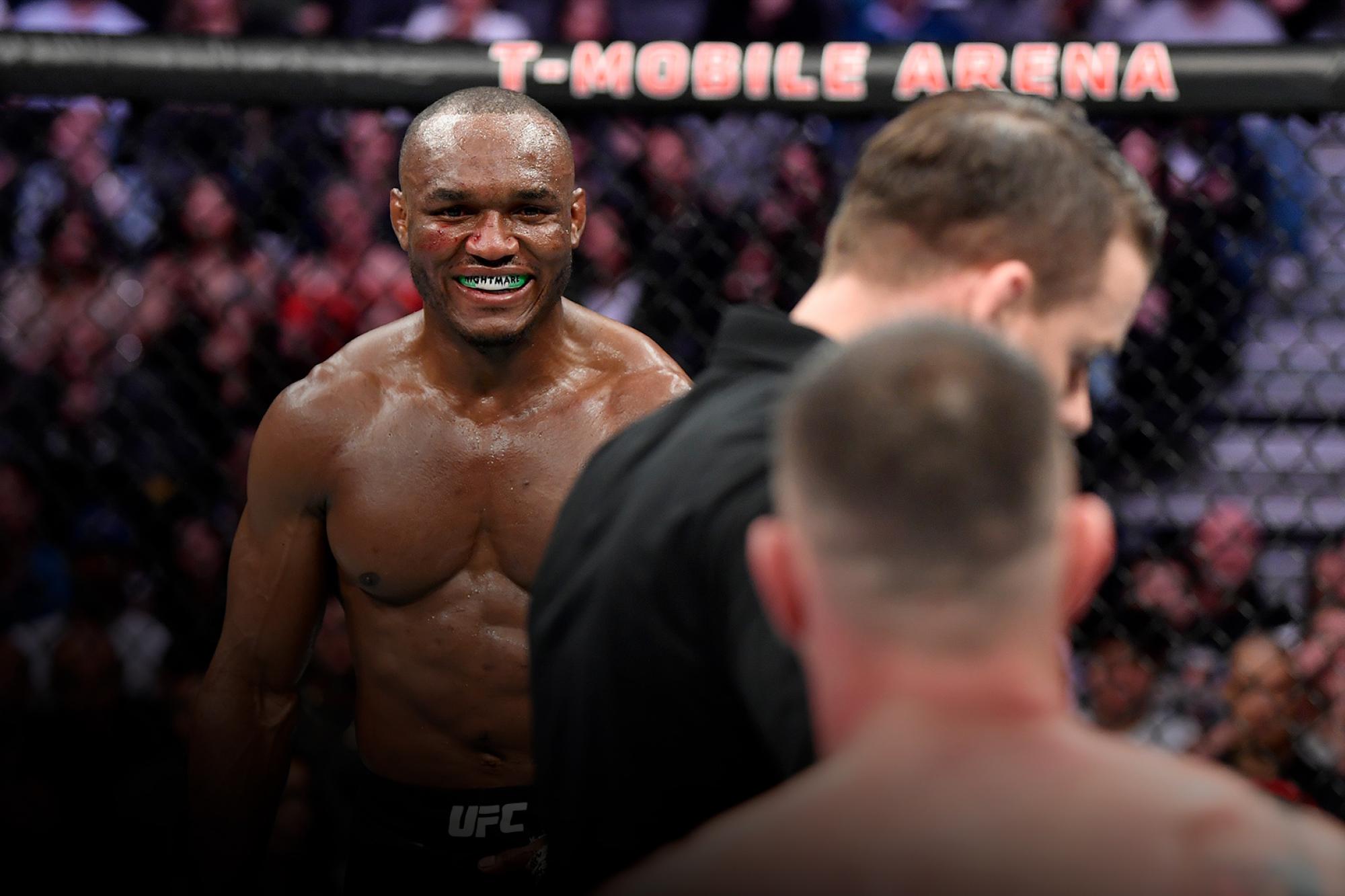 Where We Stand: Welterweight Division

Even after Kamaru Usman's hard-fought title defense against Colby Covington, welterweight remains one of UFC's most talent-rich divisions.
By Zac Pacleb, on Twitter @ZacPacleb • Apr. 6, 2020

The welterweight division could give lightweight a run for its money when it comes to trash talk and drama. That’s not to take away from the talent at 170 pounds. They all just seem to have some high-level beef with one another in the top 5, other than Stephen Thompson, of course. With that said, welterweight is as brutal a division as any to make it to the top, especially considering the decorated wrestlers that litter the top of the weight class. Naturally, though, when Kamaru Usman finally took on Colby Covington, they put on as fun of a title fight as had happened in some time, and nearly none of the action included grappling.

Another threat on the horizon is Conor McGregor’s fondness for 170. Not requiring him to cut much weight at all, McGregor wasn’t shy about the fact that he would welcome a fight with a top welterweight if it makes sense, particularly against Jorge Masvidal and Usman. That’s not even bringing up Leon Edwards’ long winning streak or the impending return to action for former champion Tyron Woodley.

Let’s take a look at the welterweight division:

Outlook: If Khabib Nurmagomedov didn’t exist, Kamaru Usman might take the top billing as the most physically dominant fighter on the roster. Among active welterweights, Usman is tied for third in takedowns landed (42) and is first in strike differential (2.43). A former NCAA Division II national wrestling champion, Usman has leaned on that pedigree as he strung together a 15-fight winning streak, including keeping a clean sheet in 11 UFC fights. While the finishes haven’t necessarily come from this approach, what’s inescapable is Usman’s relentless dominance, which was on full display in his title-winning bout with Tyron Woodley at UFC 235. In his classic bout with Colby Covington, who boasts a lot of the same stylistic attributes as Usman, “The Nigerian Nightmare” showed his improved striking, utilizing a good mixture of body strikes and the ability to sit down on his boxing combinations to eventually get the stoppage in the fifth round. Usman isn’t short of peers attacking him on the mic and social media, but what’s undeniable so far is that the welterweight champion hasn’t frequently found a dance partner willing to swim in the deep waters where Usman regularly takes the bout. 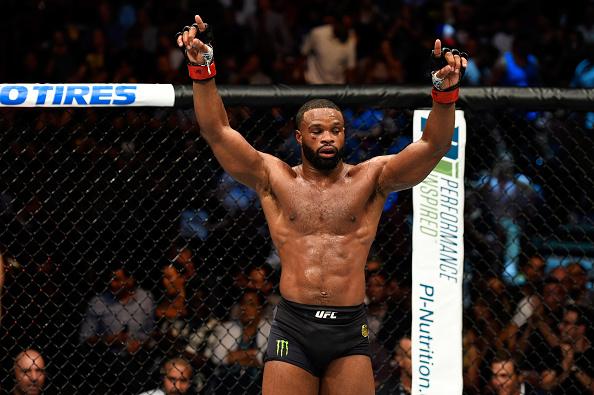 Outlook: Say what you will about Tyron Woodley, but like Jorge Masvidal has said, when Woodley is focused and engaged, he is the most dangerous 170-pounder in the division. A two-time Division I All-American wrestler, Woodley might have the most stunning one-punch power among the top welterweights. His title-losing effort against Kamaru Usman was one of the stranger performances, as at times he looked disinterested, but regardless, the reality that remains is “The Chosen One” is well-established as a high-level competitor and a tough fight for anyone. Before the coronavirus pandemic postponed his headlining bout against Leon Edwards in London, it appeared Woodley was ready to reestablish his case as the top welterweight in the world. Since then, he publicly named his desire to someone in the top 5, and if that means Woodley is ready to show that he is the best of the best, the division is better for it. 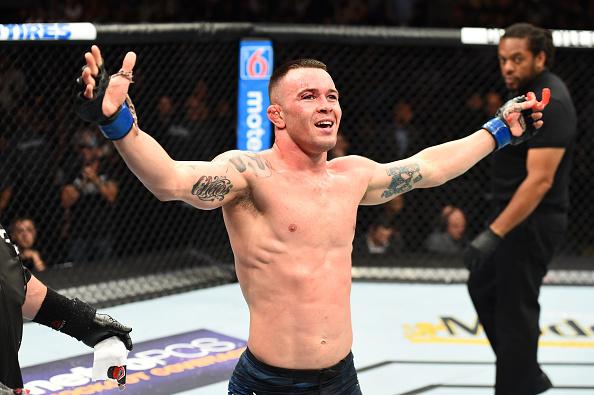 Outlook: What Colby Covington proved in his title shot against Kamaru Usman is that, beyond his loud-mouthed and sometimes abrasive schtick, the dude can downright fight. Now, if people paid attention, they already knew that. Covington leads all active welterweights in takedowns landed with 58 (also good enough for third all-time). The next closest is Neil Magny with 45, but he has nine more fights inside the Octagon than “Chaos.” Moreover, Covington’s grueling, non-stop pace was on full display against Robbie Lawler.  Covington attempted the most strikes ever recorded with 541, overwhelming the former champion and rendering the man known as “Ruthless” relatively ineffective. The only person that seemed like they could keep up with Covington’s pressure was Usman, and even then, Covington held the momentum in the back-and-forth fight more than a few times. Sure, while people might get tired of what Covington says, what you can’t tire of is watching what he’s able to do at a high level inside the Octagon.

Outlook: Nobody, save for Israel Adesanya, had a more iconic 2019 than Jorge Masvidal. Returning from a year-and-a-half layoff for a main event bout in London against Darren Till, “Gamebred” silenced O2 Arena with a knockout win. That wasn’t even the biggest headline, though. Combined with a backstage altercation with Leon, Masvidal saw a rise in his ranking and also popularity. He followed that with a high-profile buildup with Ben Askren, culminating in the fastest knockout in UFC history. One of the game’s longest mainstays, Masvidal finally found himself as a star. He capitalized on the hype by joining forces with Nate Diaz to get a BMF title fight in Madison Square Garden with the President of the United States and Dwayne “The Rock” Johnson cageside. Likely at the apex of his career in terms of control, Masvidal is in the mix to fight Conor McGregor or for the belt, and for him, it’s all about staying active and relevant. Once known as the guy always on the wrong end of a split decision, Masvidal showed a vast increase in his urgency to finish the fight since returning against Till. To recap his 2019: there was the three-piece and a soda, a #superneccessary knockout, and The Rock wrapping the BMF belt around his waist. Masvidal is one of the biggest names in the sport now, and he’s always a must-watch when he steps into the Octagon.

Outlook: A longtime dark horse in the division, Leon Edwards quietly put together an eight-fight winning streak, second only to Kamaru Usman, who is coincidentally the last person to beat him. Usman went so far as to call Edwards his most difficult opponent to date preceding UFC 245, complimenting Edwards’ resolve and Usman’s inability to break him. Edwards’ last three fights showed that he is indeed the real deal, out-dueling Donald Cerrone, out-grappling and nearly finishing Gunnar Nelson and, finally, taking down Rafael Dos Anjos in a complete performance to launch himself into the top 5. While Edwards might not be the flashiest fighter on the roster, he is clearly hard to beat and, so far, impossible to finish. With solid takedown defense, Edwards might just have the goods to challenge the wrestling-heavy approach of the top welterweights. It’s why his scheduled bout with Tyron Woodley was so appealing for “Rocky.” Birmingham-bred, Edwards was finally getting his shot to headline in London against the top-tier opponent for which he has been chasing. Whether that bout is remade is yet to be seen, but Edwards is the kind of fighter who won’t go away so easily, and he really feels like it’s his time to show that he is the king of the welterweights.

Outlook: It’s almost a little shocking to realize Stephen Thompson’s Fight of the Night win over Vicente Luque was his first win in nearly two years. That’s not to say he hit a streak of poor form. Including his razor-close title challenges against Tyron Woodley, two losses during that stretch came in a similarly close decision to Darren Till in Liverpool and a knockout loss to Anthony Pettis where Thompson relatively controlled the action until Pettis connected with an out of nowhere Superman punch. Against Luque, though, Thompson got back into his groove with his signature karate-based attack, sticking and moving against the Brazilian brawler. “Wonderboy” broke both his hands in the fight, but he showed he’s very much in the elite class at 170 pounds. For now, he might be on the outside of the title picture, but he is likely just a pair of definitive wins away from being right back into contention. One of the nicest humans on the roster, he won’t make a whole lot of noise calling for his shot, but as maybe the most technically gifted striker in the division, the results will speak for themselves.

Outlook: When Michael Chiesa controlled most of his 15-minute, unanimous decision win against Rafael Dos Anjos, he made it clear he is the real deal at 170 pounds. In fact, considering the work he put in to reform his body for the weight class, it’s pretty wild to think he ever made it to the 155-pound limit. With three good wins over Carlos Condit, Diego Sanchez and Dos Anjos, Chiesa shot his shot and called out Colby Covington, and while he might not get the fight with “Chaos” right away, he is deserving of a top 10 matchup. That eventuality carries interest if only to see how Chiesa matches up with the best of the grappling-heavy division. Speaking of grappling-inclined, “How did he make 155 pounds?” fighters, Gilbert Burns is coming off a definitive TKO win over Demian Maia in Brasilia. It was a bit of a changing of the guard moment, and Burns is as dangerous as anyone with his explosive power and ultra-slick jiu-jitsu game. And in terms of dangerous finishers, Geoff Neal is as lethal as they come. Undefeated in five UFC fights with four finishes, he showed his combination of technique and power when he knocked Mike Perry out with a head kick and follow-up punches. He earned a top 10 test, and he remains an intriguing prospect. That said, Conor McGregor could throw a wrench into any welterweight’s plans moving forward as he continues to say how much he enjoys the lack of weight cut to make 170 pounds. In the spirit of “anyone, anytime,” McGregor has the star power to launch himself into a title fight with Usman, an ultra-fun fight with Masvidal or, frankly, whatever else he wants to do. “The Notorious” looms, even with his intention to run it back with Khabib Nurmagomedov and a bevy of fun fights for him at 155 pounds.