Over the course of a little over two years on the UFC roster, Mike De La Torre has fought Canadians in Canada, Brazilians in Brazil, and Koreans in Korea without complaint. So when the call came to travel back to Brazil to compete this weekend, the answer was what you expect it would be.

“The UFC’s been sending me out of the country a lot, and I’ve been fighting everybody in their hometown in front of their crowd,” he said. “But it doesn’t really bug me that much. I’m just gonna go in there, do my thing and, like last time, I’ll win over the crowd.”

The last time he fought, in November of 2015, he pounded out a three-round split decision in Seoul, South Korea over home country favorite Yui Chul Nam. But maybe more telling was his last visit to Brazil, when he stopped Tiago Trator in less than three minutes in Porto Alegre in February of 2015. That could be a good luck charm for someone who is 7-1 outside of United States borders, with the only loss a controversial decision to Mark Bocek in April of 2014.

Nah, he doesn’t buy into such things.

“I’m not really superstitious, but I’ve been preparing for the last couple months for a fight, and I think this is a good fight, a good opponent, and I’m real excited to go back down there and repeat what I did.” 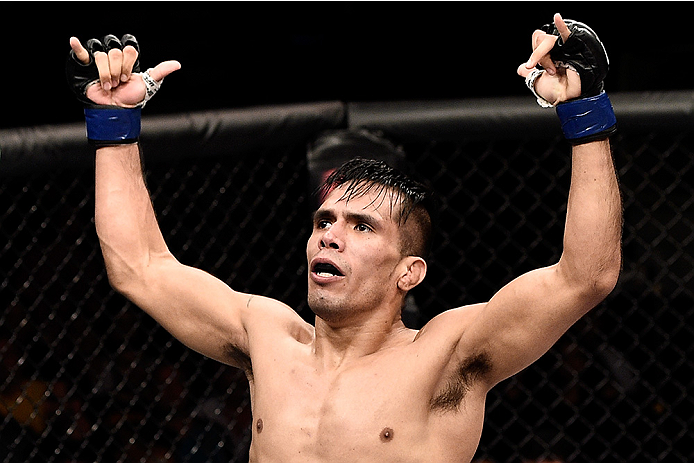 His opponent, Godofredo Pepey, replaced Renato Moicano, who was forced from the bout due to injury. On paper, this is an even better fight, as Pepey is always eager to finish and De La Torre shares a similar mindset. As for the change in opponent, “It’s business as usual,” he said. “It was so far out that it really didn’t make a difference. I had a lot of time to prepare, so I wasn’t too worried about that.”

But what of the unorthodox – some would say reckless – style of Pepey. It’s got to be hard to replicate that in the MMA Lab gym where the fighters are known for being technically solid under the tutelage of head coach John Crouch.

“The first couple minutes will probably be the toughest to try and figure him out,” De La Torre said. “(Pepey) likes to come in real explosive and he likes to throw whatever comes into his mind. The thing I have to do is keep up with his pace, try to weather the storm, then see where we can counter off that or go in and take advantage of that situation.”

Those first few couple minutes will certainly be intriguing, especially since Pepey last fought in July, while the 30-year-old De La Torre has been out for nearly a year, first to heal a shoulder injury, then to get the call for a fight. Well, he did get a call, but that turned into a funny situation that kept him from competing in the UFC Fight Night show in August.

“They offered me one in Utah with one of The Ultimate Fighter guys, but (Horacio Gutierrez) started training at our gym three or four days before the UFC called,” De La Torre said. “I didn’t really know who he was, so I told them, ‘Yeah,’ and then a couple hours later I found out that he was the new guy in the gym, so it didn’t work out. So now I’m fighting in September and I’m excited. I’m ready to get this show started.”

De La Torre also promises some different looks thanks to the work he was doing while waiting to get back into the Octagon, making the San Diego native an even more dangerous fighter than he was the last time fight fans saw him.

“We have a new striking coach at our gym, Eddie Cha, and I’ve been working with him the last couple months, so it’s been kind of good that I haven’t been fighting,” he said. “Me and him are connecting good and he’s bringing my striking game to a different level. Plus, I have John Crouch working my ground and I have the best training partners in the business, so I feel like a complete fighter now and I just want to showcase my skills and let everybody know that I’m here and here to stay.”

And hey, a fight in the United States the next time around wouldn’t be bad either.

“I want to put on a good performance and raise my stock a little bit and try to get a fight in the U.S.,” he said. “I don’t care where, just somewhere in the U.S.”