Welcome to the UFC: Zak Ottow 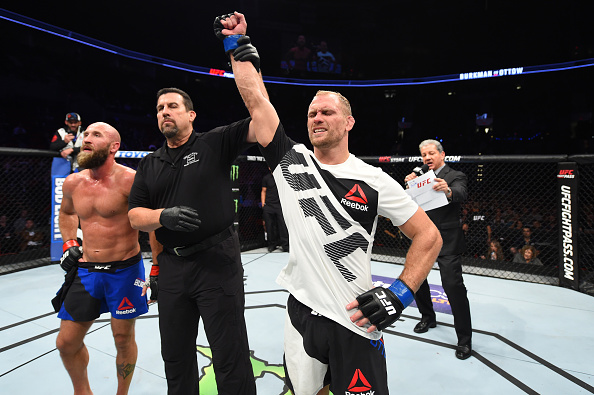 Living in a small side room inside his gym in Milwaukee, Wisconsin, with a bachelor’s degree in kinesiology in his back pocket, Zak Ottow buckled down and began his quest to be a UFC fighter.

When he wasn’t training or sleeping, he’d be watching fights. He has notebooks full of notes and instructions on how to implement what he sees on screen to his actual fight repertoire.

“Even before I got here I just watched all the fighters in my weight class (welterweight),” Ottow said. “I’m trying to always take little techniques here and there and put them to use in the gym and work on my game.”

The decision to pursue fighting instead of taking the medical school entry exam has paid off for Ottow so far. The 29-year-old Brazilian jiu-jitsu brown belt has amassed a 14-3 professional record and won his recent UFC debut in an upset of Octagon veteran Josh Burkman.

For a long time Ottow was known around his local fight scene as a grappler, but “The Barbarian” has been working every part of his game equally and now feels like he is a complete fighter.

“At first I was known a little more as a grappler and people would call me just a wrestler. That pissed me off,” he said. It’s been my goal to be as well rounded as possible. Maybe back 10 years ago you could be a very elite fighter being a little more one dimensional. But the sport is quickly evolving and if you’re not evolving with it you’re going to be left behind.”

Next up for Ottow is a Nov. 19 date with Sergio Moraes in Sao Paulo on the main card of Fight Night: Bader vs. Nogueira. He is focused on winning right now so he is able to secure a second contract with the UFC. But ask him if he has what it takes to be a champion and he’ll be the first to say that he’s gunning for the title down the road.

Related: See how Ottow matches up with Moraes ahead of their Nov. 19 bout

“This is a really tough division, probably one of toughest divisions out there here at 170. But as I look down the list I don’t feel like I’m going to be out of my element against anybody,” Ottow said. “I’m always going to be game and I feel like I can compete at the highest level. Whoever is in the Top 5 or whoever is the current champion wasn’t born with any more talent than I have. I don’t think there is any reason why I can’t be a champion.”