Welcome to the UFC, Gina Carano 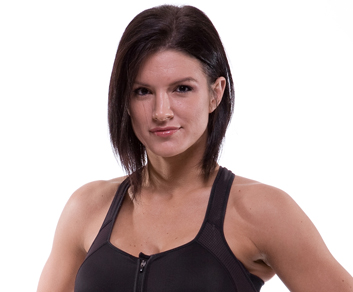 Before there was Ronda Rousey, there was Gina Carano.

Today, after UFC President Dana White delivered the signing he promised he would, Carano is back, and her sights are set not just on taking back the title of “The Face of Women’s MMA” from “Rowdy” Ronda, but an even bigger crown – Rousey’s UFC women’s bantamweight world championship.

A Dallas native, Carano, 32, captivated the sports world from the time she moved from Muay Thai kickboxing (where she compiled a 12-1-1 record) to mixed martial arts in 2006.

A ferocious striker who also proved that she could go the distance and handle herself on the ground if necessary, Carano defeated the likes of Rosi Sexton, Julie Kedzie, Tonya Evinger, and Kaitlin Young en route to an unbeaten 7-0 record.

More importantly, with a mix of fighting ability, charisma, and movie star looks, Carano put women’s MMA on the sports map and helped propel the sport forward, becoming the first female MMA fighter to appear on CBS and Showtime, as well as earning the number five spot on Yahoo’s “Top Ten Influential Women of 2008” list.

In 2009, Carano, the daughter of former Dallas Cowboys quarterback Glenn Carano, would lose for the first and only time, getting stopped by Cris “Cyborg” in a Strikeforce bout in San Jose, but then Hollywood called, putting her fight career on hold.

Films Haywire, Fast & Furious 6, and In the Blood followed for Carano, who drew positive reviews for her acting, but even as her film career was taking off, she didn’t rule out a return to the fight game, telling UFC.com before the release of Haywire in 2011, “I definitely do miss it and I haven’t necessarily retired yet. I’m not one of those people that are gonna retire and then come back, and retire and come back, it’s just not my style. So I’ll wait until I know if it’s right in my heart that I need to finally close that chapter in my life. But I haven’t been able to do that yet.”

Fans weren’t able to let her go either, and they clamored for her to come back to the fight game, even as fighters like Rousey and Miesha Tate made their name in the sport in her absence. Not that such a development bothered Carano, who said in 2011, “Ronda Rousey and Miesha Tate are phenomenal. I respect Miesha Tate because people didn’t expect her to win that Marloes Coenen fight, and I didn’t expect that to happen, so after she won that fight, she gained tons of respect from me. And she doesn’t appear to be one of the people that has been naturally gifted with the ability to do MMA, so you can tell that she worked extremely hard at everything and for everything that she’s gotten. I have complete respect for her. I also respect Ronda Rousey. Here we have an Olympic athlete coming into our sport and that’s exactly the type of athlete we want to come to women’s MMA, and she’s stirring things up and she’s going for it, and I completely love that about her. I think they’re keeping the sport interesting, and I support both of them a hundred percent.”

For her part, Rousey – never one to shy away from expressing herself – always respected Carano and what she had done for the sport. Even as Rousey began to get the mainstream media attention to rival what Carano had received, she didn’t make a hostile takeover of the “face of women’s MMA” title.

“I definitely don’t think I’ve pushed her aside,” said Rousey in 2011. “She’s the one coming out with a multi-million dollar movie (Haywire) in a couple months, and I’m not. (Laughs) But in the actual competition, I’m dealing with it (all the attention) fine. I expected it to be this way and I asked for it. This is what I wanted; I wanted not only to fight in women’s MMA, but to be the best at it and the most exciting at it. I’m just stoked at how things are going so far, and I really want to keep it going. When people watch the fights, I want the girls to steal the show. I want everyone to be like ‘hot damn, I want to see more of that.’ And I’m just trying my best to keep it going.”

She has, becoming a crossover star of epic proportions, and yeah, those multi-million dollar movies have followed for “Rowdy” Ronda as well, a consequence aided by the UFC’s decision to bring female fighters into the promotion in 2013. Rousey and her peers became a big hit in the Octagon, and while Carano continued to have success in Hollywood, she admitted in an interview with UFC magazine earlier this year that fighting in the Octagon was one goal that had eluded her.

“It makes me beam with pride when I see all these women succeeding, but there’s also that kind of desire (to fight again), and I never got to make it to the big show,” she said. “I was right there and I had that conversation with Dana White, but I was fighting for Strikeforce, and I don’t know if I’m ever going to get to scratch that itch or not.”

She is going to, making the women’s MMA Superfight fans have clamored for one step closer to reality. Yes, Carano is five years removed from her last bout and Rousey looks unstoppable, but there’s more on the line here than just a payday.

This is the biggest – and the most historic – women’s MMA fight to date. It’s a meeting of the two fighters that brought this sport to where it is today, and one of those matchups you don’t get to see too often; and if you do, one fighter is usually past his or her prime. Carano is 32, she was never in a series of drawn out wars, and she’s been in the gym since her bout with Cyborg. And not just to stay in shape, but to round out her game.

“If I’m working out or breaking a sweat, in my mind, I’m fighting,” she told me in February. “I love going in the gym and getting better and getting my first gi and learning so much more about jiu-jitsu and Muay Thai than I ever knew. So I feel much better all around.”

But the kicker is that despite the polar opposites of Ronda’s scowl and Gina’s smile, what the two share is a competitive spirit that can only be satisfied by facing each other in a fight.

Rousey has referred to Carano as a hero of hers, and what better way to stamp her era in MMA than by beating that hero? As for Carano, if she left the sport behind for good after the Cyborg fight, there would always be questions in her head about what could have been. So her return shouldn’t be a surprise.

She’s a fighter. To paraphrase White, it’s in her DNA; we get it, and we like it.