Welcome To The UFC: Danny Roberts

This series highlights new UFC-signed athletes and briefly details how they have made their way to the premier combat sports organization in the world. Introducing Danny Roberts. 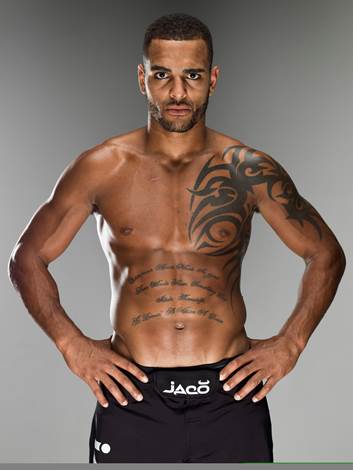 It’s said that in life, things happen in threes. Good things, bad things, anything. Liverpool, England’s Danny Roberts may not have been a believer in such matters before, but he’s coming around to it, especially since this week brought two good things already.

One, his son was born on Monday.

Two, he signed a contract to compete in the UFC’s welterweight division.

“My son was born, I’m a UFC fighter, the third one for the hat trick, I wonder what that could be? A Christmas present from Dana White with a nice bonus would be the one for me to seal the deal. I’ll take that.”

“I just can’t wait to get it started.”

That day for Roberts’ UFC debut is expected to come before the end of the year, and the fact that he’s already got his sights set on a post-fight Performance bonus shows you what kind of fighter the 28-year-old is. He’s a finisher, with nine of the victories on his 11-1 pro record coming by way of knockout or submission. But look a little closer, and while the varied submissions he’s pulled off (Brabo choke, armbar, RNC) are impressive for a former boxer, the real takeaway is that his first three pro wins came by knockout via knees to the body.

Three knockouts. All with knees. To the body.

Roberts says we’re not getting the full story.

“If you ever look at my semi-pro record before I turned pro, there were like another four back-to-back,” he said. “I went through a little stage where if I got in a clinch and I wanted to knee you, I was going to knee you. And I did that to like six, seven people in a row. But I realized I had to change my game a little bit, and I tried to switch up and learn some more kicks and be a little bit more elusive and diverse than just trying to wipe people out with knees.”

“I might have to bring it back out of the toolbox,” he laughs.

That toolbox has grown significantly since his early days, when he had to make the choice between pursuing a boxing career and switching over to mixed martial arts. Back then, he was a striker. Exclusively. Ask him if he had any grappling background before training in MMA, and he says with a chuckle, “It depends on the sort of wrestling and grappling you’re talking about. If you’re talking streetfights and throwing people on the floor, I had plenty of that, but collegiate wrestling and things like that were something I got introduced to when I made the transfer over from boxing to MMA.”

So we’ve established that Roberts was a tough guy who knew his way around a scrap, but MMA tends to weed those folks out pretty quickly unless they adapt to a new world that now involves wrestling, judo, jiu-jitsu and kickboxing. Roberts had some attributes from boxing that carried over initially, but it was his desire to learn and get better that made him a legitimate threat in his new sport.

“The boxing gave me certain attributes which carried over to wrestling – fast feet, good hips, and good general movement and balance,” he said. “But at the same time, until I actually got into MMA and it became full-time, that was when I really started to capitalize and concentrate on it.

“It was a hard decision to make and it didn’t happen straight away,” Roberts continues. “It was something that developed over the space of a few months and I had to prove to myself that I was good enough and had what it takes to perform. But overall, the biggest thing that I fell in love with was the dedication and the devotion to learn. With boxing, I got to a level where I felt like I had learned a lot, if not everything, and I just had to finely tune things. With this, it’s always evolving, always turning, there are always things to learn, and I like to keep mentally stimulated as well. So after winning my first fight and seeing what I was capable of, and realizing that ultimately in the long run I’m going to be the better all-around athlete, rather than a one-dimensional athlete, that was the way forward for me. MMA opened a new book.”

Roberts began writing chapters in that book professionally in 2010, and with the exception of a submission loss to Pavel Doroftei in 2011, he’s been perfect, with a recent five-fight winning streak in the Cage Warriors promotion, capped off by a first-round knockout of veteran standout Jim Wallhead in May of 2014 putting him on the UFC radar.

But before he got the call, there was one more task of housekeeping to take care of, and he needed to go to South Florida to do it.

“Initially, I looked into the Blackzilians after seeing the movement that the fighters were making along the scene – they were dominating and winning a lot of fights,” said the newest member of the renowned fight team. “There were a few standby names like Michael Johnson and AJ (Anthony Johnson), and even more fighters at that elite level that I needed to be around and to grow with; people that could challenge me in every aspect of my game. So I generally assessed it, I looked at other gyms that were around, I spoke to (team owner) Glenn (Robinson), I spoke to Fabrice (Deters), and realized that the ethos within in the gym was very much like my beliefs I’ve got within the fight game. So I knew for a fact that it was a perfect place, and the second I landed, I got introduced to the team, and I wasn’t proven wrong. It’s been perfect since.”

In Boca Raton for the last 14 weeks, Roberts will return home to England for a couple weeks to see his baby boy and his girlfriend, and then it’s back to work in the U.S. It’s a sacrifice, but one “Hot Chocolate” has been waiting to make for a long time.

“I’m a great believer in the way you think and manifesting your own thoughts and your future,” he said. “I knew it was going to happen, I knew I was going to get the call; it was just a matter of timing and being in the right place. This is one of the biggest reasons why I came to the Blackzilians and did make the move. I need to be with that level to be able to know and to reassure myself every day that I train that I’ve got what it takes to be there with the elite.”

As for the family at home, he’s doing it all for them.

“My mum supports me in every move I make,” he said. “She’s one of the strongest figures in my life. I had hardships growing up and she was the person that was there supporting me, and she helped turn me into the man I am today. So fundamentally, she’s been one of my powers and strengths. And obviously now I’ve got a little boy, so I’m going to be working towards securing a future for him, my girlfriend and myself, and I’ve got to really capitalize on the opportunity that I’ve been given.”