Welcome to the UFC: Bilyal Makhov 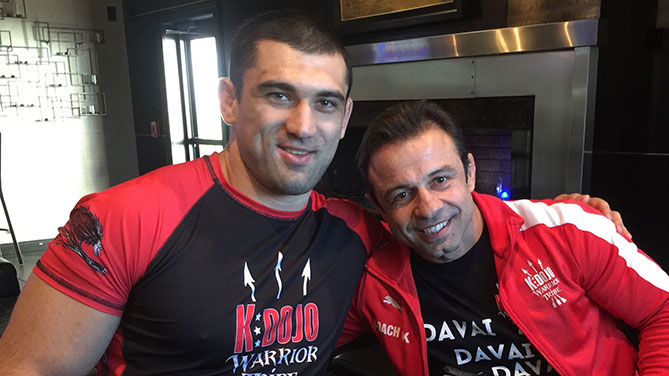 Bilyal Makhov’s anticipated UFC debut is at least a year away. But when it does, the world will see the rebirth of a champion.

This past week, Russian-born Makhov made history by becoming the first wrestler in 42 years to earn medals at the World Wrestling Championships in freestyle and Greco-Roman wrestling by claiming bronze in both disciplines in the super heavyweight (130 kg) category.

But that’s not enough. Makhov is still committed to wrestling through the upcoming Olympic Games in Rio de Janeiro, where he has announced that he will compete in only one wrestling discipline. But he’s already eyeing another challenge -- another Everest, as he puts it.

“To conquer this new mountain called UFC will give me new emotions, new feelings, new challenges – kind of like a rebirth and start everything from zero,” Makhov said while visiting the UFC’s Las Vegas headquarters during the recent wrestling world championships.

“This is what I want to get out of it. I want to get that feeling of rebirth and start all over again. Wrestling is one of the hardest sports. UFC is like that, but it also has other challenges that give you a new path again. Like a rebirth, start everything new and hoping to get new emotions from this rebirth. To conquer the mountain called UFC.”

The soon-to-be UFC heavyweight will be taking a new path to the top, for sure. Unlike most fighters signed to fight in the Octagon, Makhov inked his name on the dotted line on April 25, 2015 with no MMA experience to his name – and he’ll likely have none until his debut.

“This kind of stuff happens to me a lot,” Makhov said. “I was first in the history of Russian wrestling to compete in Greco-Roman and freestyle. For me, this is adrenaline, this is a risk I’d love to take just to put my name in the history. To do something in the sport that’s unusual and unique.”

But make no mistake – this is not a stunt.

Makhov is far too decorated an athlete to make a move to UFC simply for the publicity value. Just like a mountain climber conquering Everest, his approach will be “inch-by-inch,” and not relying on shortcuts to reach the top.

“I’m not doing this for some kind of PR, I am really doing this 100 percent,” Makhov said. “Anything I do, I think about what’s the best approach for it. Yes, I know there’s some technical aspects of this game that I need to work on – my striking, and I’m working on that with my coach (Murat Keshtov from K Dojo Warrior Tribe gym).

To that end, Makhov is already studying former and current heavyweight champions Cain Velasquez and Fabricio Werdum. His UFC debut is over a year away, but he knows that watching how they fight, train and do things will help him as he begins his climb.

Makhov is confident, but not cocky enough to think he’s at their level yet. Once he finishes his wrestling career, he knows he must focus on his striking, submissions, cage control and other aspects of mixed martial arts to add to his repertoire.

“I want to make history by becoming first guy to win the Olympics and have a UFC belt,” he said. “I’m trying to make history. The striking will come along, I’m not 100% comfortable yet but it will be there when my focus is 100% dedicated to striking.”