Karine Silva | Welcome To The UFC

“I decided to live in the gym and become a fighter because it was love at first sight.”

Karine Silva is recounting her path into mixed martial arts, a path that started in 2013.

“I started training for a better quality of life. I got to know about Chinese boxing and then I transitioned to MMA. My MMA journey was very fast.” 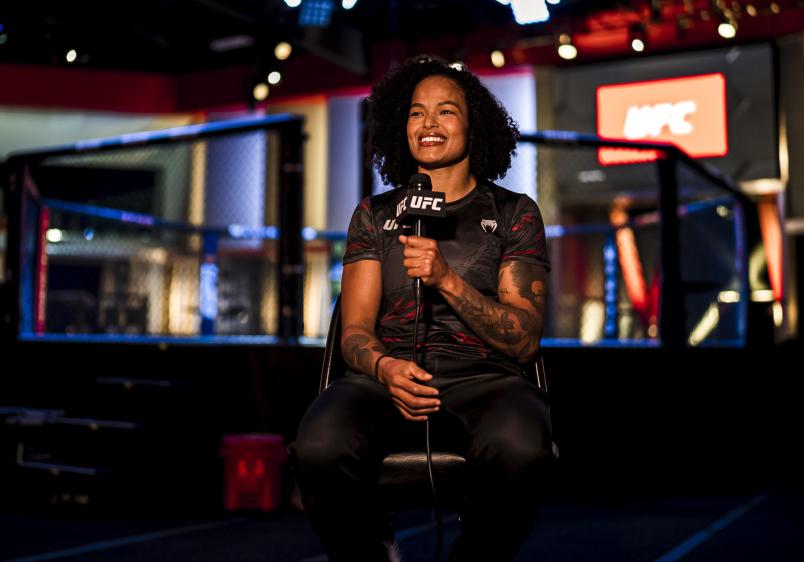 Fast and successful. After two wins on the amateur circuit, Silva quickly turned pro and hasn’t looked back in amassing an impressive 14-4 record. Her most recent win - and her fifth straight - came in front of her biggest international audience to that point when she secured a UFC contract on Week 9, Season 5 of Dana White’s Contender Series last October.

“A clear display of power, technique and composure,” announcer Michael Bisping would say of Silva’s performance, a performance that saw her calmly weather an unrelenting tidal wave of power by the name of Yan Qihui until she saw her opening in the second round to jump the guillotine. Mick Maynard, Sean Shelby and UFC president Dana White sat Octagonside in visible awe. In awarding her a contract that night, White would remark that he liked, “everything about her.”

“It was amazing, just overcoming one thing after another. I was very happy,” Silva recalls. “I was even happier with the result. It was really cool, one of the best experiences I've ever had. It was exciting.”

The 28-year-old will look to build on that excitement and momentum Saturday when she steps into the Octagon against fellow Brazilian Poliana Botelho at UFC Fight Night: Volkov vs Rozenstruik. Already a veteran of the flyweight division, Botelho is a tough first assignment for anyone. But Silva views the matchmaking and her main card placement as validation of her skillset.

“This is just the result of our hard work,” she says of the pairing. “Obviously, I was very happy. I already knew her work in the UFC since she's had some fights. We got to analyze some things and on Saturday night we'll find out what the next step is.”

The composure Bisping mentioned is an apt characterization of Silva, both in and out of the Octagon. As she sits for a second time in the UFC APEX doing media and photographs, one might describe her as placid. Her low-key demeanor is punctuated by easy, frequent smiles. It’s the kind of persona that runs contrary to her Octagon moniker: “Killer.”

“It was my first MMA coach who gave me this nickname,” she laughs. “I think it was because of my aggressiveness.”

That aggressiveness is on display in nearly every Silva fight you might watch. Both rounds of her DWCS bout opened with immediate front kicks that landed hard and served as a sort of mission statement for what was to come. That method has served her well: in her 14 wins, 100% of them were finishes.

But she’s well aware that the UFC is a different beast, that even someone with her stellar résumé will likely need to step up their effort to make hay in the big leagues. To that end, she’s grateful for the camaraderie of her Gile Ribeiro training partners in Curitiba that are already appearing under the bright lights, like Augusto Sakai and Rogerio Bontorin.

“It's very cool because they bring their experience, since it will be my first time here, and you get a feeling of what it's like. Obviously, when you arrive it's a little bit different. You feel more emotional. But it was great because I got to learn from them.

“It's been seven months of intense learning to get to know myself again, to learn with my team and myself,” she says. “I'm really happy with everything that's happened.”

Saturday is all she has been thinking about, the peak of a love affair with MMA that started nine years ago, one she is here to grab with both hands. What should we expect to see?

“A very aggressive style on my behalf.”