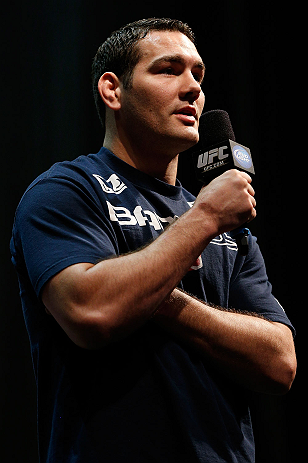 Considered to be the biggest threat to Anderson Silva’ nearly seven year reign atop the middleweight division, Chris Weidman gets his shot at championship gold on July 6 in Las Vegas when he meets “The Spider” in the main event of UFC 162. And while his five UFC wins show what the New Yorker can do on fight night, the below quotes take you into the mindset of the number one 185-pound contender.

Beginnings
“Ever since I started I felt like I could do something big in this sport. I was looking at the top guys in the UFC in my division and visualizing how I would do against them. I’ve always been looking at the top.”

Pre-Sakara
“I hope the fans say that this kid has a big future after the fight. I’m hoping to put on a show and I hope that they’re excited to follow me and become a fan of mine.”

Sakara fight
“I tried to take every little thing and use it as an advantage. People were asking me how it felt to be in the UFC, and I wasn’t thinking about that. All that mattered was Alessio Sakara. I had to win that fight. Even now I still haven’t got time to sit back. Again, this is a must win, must dominate, fight for me in my eyes, and I won’t be happy unless that’s the way it goes.”

Wrestling
“I love that I came from a wrestling base, not only for the fact that I get to dictate where the fight is, but also for the mental preparation that it gave me in any type of competition I’ve done over the years. It definitely gives me confidence, but nothing’s ever as easy as it might look. Even if you get a takedown, it’s far from over, and you can’t relax.”

A Fighter’s Heart
“I would fight anybody in a heartbeat. But I’m also willing to do whatever the UFC wants to do as far as bringing me up and having me get experience; that’s fine too. I do still have a lot to learn and have a need for improvement in every part of my game, so I’m not in a terrible rush, but I do feel like I’m ready.”

Impatience is a Virtue
“I take it one fight at a time, but I’m always trying to press up to the best competition. My managers, they wanted me to take my time, but I was always trying to look towards the top and getting closer to the top. So I wasn’t looking to take fights with guys that were supposed to be on the same level at that time. I was trying to go another step further to challenge myself, and with doing that, I guess things came a little faster.”

Impatience is a Virtue II
“I’m trying to look at the big picture, stand outside the box and look at everything from the outside. And the reality is that my career is not gonna be forever, so I want to try and make the best of it. I don’t want to look back and say ‘aw man, I wish I would have taken that fight then,’ or this and that. I’m just gonna go with it, and if I lose because I took a fight on short notice or I take a fight that some people wouldn’t want to take, at least I took that chance, and when I’m 50 years old, I want to look back and know that at least I gave it a fair shot and tried to do the best with the abilities that God gave me.”

Never Satisfied
“This is awesome, but I’m not satisfied where I’m at. I have to keep winning and I have to get that belt, so I haven’t had a chance yet to sit back and reflect on what I’ve been doing. It’s just more additional pressure to keep moving forward and keep winning. That’s it.”

Hard Work builds Confidence
“As far as confidence, every day I work as hard as I possibly can. I try to kill myself and try to beat everybody in the room every day. Every day is a competition. If I see a guy doing a workout, I want to do it better, and I think confidence comes from hard work.”

The Competitor
“I love challenges and I compete in everything. I’m overly competitive and I love the fact that people think he can beat me. I love having the chance to be able to beat the best and become the best.”

The “0”
“Maybe they think that at 9-0 I just blew through guys, but every guy I fought was a tough guy. They were all good learning experiences. I could have 40 fights by now, fought all bums, and fought six guys in a month because I just know I can beat them. I fought guys that challenged me in a different way every single time, but every time I had a full training camp, I had a finish in the first or second round, so I’m hoping to keep that going with this full training camp.”

Confidence and positivity
“I have a great family and great parents. They raised me the right way and kept positive values in my life. As far as confidence, every day I work as hard as I possibly can. I try to kill myself and try to beat everybody in the room every day. Every day is a competition. If I see a guy doing a workout, I want to do it better, and I think confidence comes from hard work. As far as a positive outlook, it’s a spiritual thing where you have God and you have to just trust in what his plans are. It’s all in God’s hands and it takes the pressure off me and gives me a positive outlook on life, my fights, and whatever pressures I might have coming up. I’m not always spiritually in the right place and I’m far from perfect, but when I do have myself spiritually right, I have a great positive outlook on life and there’s nothing that can hold me back.”

On Fighting Anderson Silva
“The motivation behind this fight is unending. I don’t have to search for a reason to want to fight for this belt. It’s a dream come true fight, the opportunity of a lifetime to fight the greatest of all-time, and I think I have all the tools anybody can ask for to beat him. I think it’s a great matchup for me. This is a great opportunity, I’ve had other great opportunities in the past; I’ve just got to make the most of it.”