Weidman’s walkout gets a lift from another fighter, Ian Matuszak 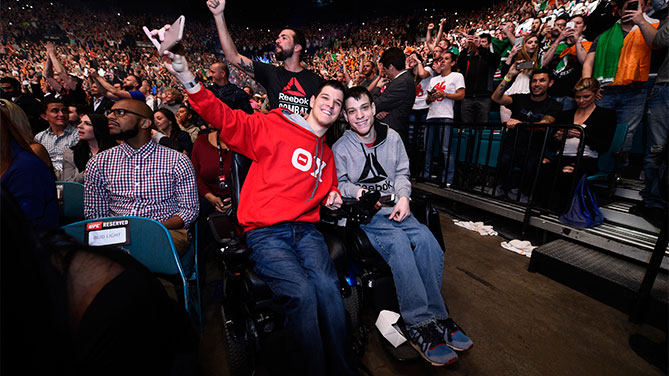 This may be Chris Weidman’s time to shine, but it is Ian Matuszak’s moment to inspire.

As the defending UFC middleweight champion made his way to the Octagon on Saturday night to face No. 1 contender Luke Rockhold in the much-anticipated co-main event of UFC 194, his teammate at Longo & Weidman MMA in Garden City, NY was right behind him, with solid words of advice.

“Avoid the kick, whatever you do,” advised Matuszak, 20, a blue belt in jiu-jitsu with a keen eye and mind toward mat work and strategy

But it’s the amazing heart and will of this magnificent fighter that is compelling Weidman to excel in his latest title defense.

Born 15 weeks premature in May 1995 along with his triplet siblings, sister Sydney and brother Alec, Ian Matuszak was diagnosed with cerebral palsy. So was Alec. Sydney eventually needed surgery to repair scoliosis in her spine.

Both Matuszak boys require walkers to move around daily and motorized wheelchairs for longer distances. But very little stops them. Not even the latest setback in Ian’s path: Matuszak was recently diagnosed with stage 3 esophageal cancer.

Ian is a decorated jiu-jitsu fighter; a college student; a blogger. He’s smart, funny and charismatic.

The Matuszak Family exemplifies the mantra: We Are All Fighters.

“With MMA, Ian really found himself. And he doesn’t know how much he inspires people by just being Ian,” said Ed Matuszak, Ian’s father. “I’m really proud of him.”

“He’s been through so much,” said Weidman, who worked with UFC officials to fly the entire Matuszak family to Las Vegas to attend UFC 194, all expenses paid. “Every day, Ian just lifts me up.

Weidman arranged for Ian and family to attend Friday’s weigh-ins, with Alec and Ian in prime locations just off the stage to watch the proceedings. Afterward, the family met with Weidman backstage.

“I don’t know if you know this,” Weidman told Ian, “but you’re going to be walking out with me. And you need an outfit.”

“What the f---?” Matuszak blurted in complete surprise, as everyone laughed. “This is incredible! Oh my God, thank you!”

“You’re awesome, man,” Weidman told him, offering his hand. “It’s going to be a good time.”

“Did you beat up any Irish guys?” Weidman asked jokingly.

“No, although if someone tried anything, I can choke ‘em out,” Matuszak responded with a chuckle.

Motivated to learn about MMA after being captivated by the epic Dan Henderson vs. Mauricio  “Shogun” Rua battle at UFC 139, Ian became an ardent student of the sport and joined the Power Gym/Longo & Weidman MMA community in 2013.

Training, practicing and climbing up the ranks in jiu-jitsu helped Matuszak overcome the depression that dogged him in his teen years, when he felt powerless to live the life he wanted.

“It’s given me the confidence to do anything,” said Matuszak, who earned his jiu-jitsu accolades under instructors Pete “Drago” Sell and Dave Patton, extending the heritage of greatness under Matt Serra and Renzo Gracie.

All these legends attended Matuszak’s blue belt ceremony in October, along with Weidman, Al Iaquinta, Eddie Gordon, Aljamain Sterling and more than 200 onlookers. And it was this tight-knit MMA family that helped set up a GoFundMe page to help with Ian’s medical costs from his cancer diagnosis

At UFC 194, Ian Matuszak’s road to greatness includes a walk behind Weidman, a UFC champion who will draw strength from the blue belt’s amazing journey.

“When we go in there tomorrow, we’ve got to take care of business,” Weidman said with a handshake Friday.

“Of course! And you have to use your elbows!” Matuszak advised. “And don’t get kicked. Please!”