After trading blows with the likes of Anderson Silva, Lyoto Machida and Vitor Belfort and emerging victorious against each, Chris Weidman doesn’t get rattled by much. But when the former UFC middleweight champion watched his four-year-old son CJ compete in his first wrestling tournament earlier this month, that was a whole different experience.

“It was an amazing, amazing feeling,” he said before adding, “Scary? I felt like I was going to throw up the whole time.”

Only a week away from his Apr. 8 bout against Gegard Mousasi in the co-main event of UFC 210 in Buffalo, Weidman is in an interesting place with his own career. He’s lost two in a row, and a win is imperative for him in order to make another run at regaining his title.

Yet despite Weidman’s strong desire to keep his son from getting burned out by the rigors of wrestling, watching CJ compete has provided the father a reminder of why he competes.

“CJ is only four years old, and I would never recommend anybody putting their kid in to wrestle that young,” Weidman said. But when CJ saw his cousins wrestle in a high school tournament, the boy was hooked.

CJ got on the mat, with dad coaching and his coach Ray Longo and training partner Gian Villante in attendance.

The younger Weidman, battling a fever during his debut tournament, had a 15-second pin in his first match, won his second 9-0 and prevailed in his finals match, 11-8, with a series of last-second moves that left his father in awe.

“All of a sudden, this kid’s running him off the mat, and CJ sinks an underhook - and I never taught him that, it was just instinctual – and lateral dropped the kid to his back as he was falling backwards,” Weidman said. “It was unbelievable. I was tearing up, I’m so proud of him.”

Watching his son embrace competition has inspired Weidman, 32, in a whole new way.

“It definitely does get me more excited because it kind of brings me back to where it all started for me too,” he said. “When you’re wrestling as a little kid, you’re not doing it for any other reason other than you love it. You’ve got to love what you’re doing and it does bring me back to why I started all this and how I got where I am. It’s because of the love of the game. And that’s the way it started in MMA, too.

“My first sparring session, I picked the mouthpiece off the floor, I just wanted to do it so bad and I just loved to fight. And it does bring me back to the roots, because sometimes when you get so involved in a sport, you kind of forget why or how you got to where you are.” 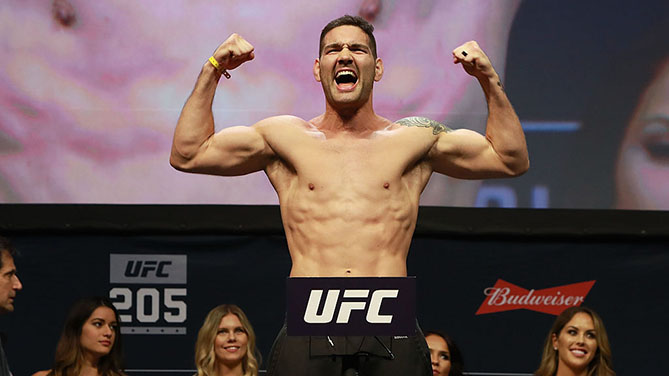 When an athlete has the success Weidman has had, it’s easy to get lost in press conferences, photo shoots, interviews, and the trappings of being the best 185-pound fighter in the world. Couple that with two straight losses, and it could take away that love of the game. Yet despite the defeats to Luke Rockhold and Yoel Romero, the Long Islander is more positive than ever about the future.

“I’ve been in a good place mentally leading up to this fight,” he said. “It’s good to have that moment of clarity and reflection and do really positive things, especially when you’re going through a slump. I’ve lost two fights in a row and I need to make my comeback and show the world that I’m not going anywhere, that I’m still the best in the world. I just had two bad fights and now I’m getting back on track.”

“Comeback” is the operative word for Weidman and his camp as they prepare for Buffalo. And while that’s a dirty word to some, to “The All-American,” it’s a proposition he’s embracing.

“Sometimes, a comeback is more exciting for an athlete than being on a winning streak because you have people writing you off now,” he said. “You almost go back to where you started, where no one’s watching, and it gives me that extra motivation to prove to myself and to everybody else who I am.”