Chris Weidman rolled into UFC 194 as the undisputed middleweight champion, the man that ended Anderson Silva’s long reign over the division before tacking on three more impressive victories to cement his standing as the best in the 185-pound ranks.

On December 12, 2015, he walked out of the Octagon as the former champion, blood mixed with tears slowing running down his cheeks as he marched past press row, having just suffered the first loss of his professional career at the hands of Luke Rockhold.

The rivals will meet again in the main event of UFC 199 on Saturday, June 4 at The Forum in Inglewood, California and the Long Island native is already counting down the days until he can get back in the cage with Rockhold and take back the middleweight title.

“Luke is on my mind all day and I’ve never been so excited for a fight, so I’m just doing everything I possibly can to win this belt back,” Weidman said last week in Las Vegas when he was in town to corner longtime friend and training partner Gian Villante at UFC 196.

After getting some distance from the defeat, Weidman is able to find the silver lining in his setback, recognizing that falling to Rockhold has provided him with the impetus for making changes to the way he approaches his training camps and adjusting what he’s working on in the gym.

Those are things that an undefeated fighter and a champion don’t always do, opting instead to operate on the “if it ain’t broke” principle.” But while victories reinforce previous behaviors, losses send you searching for answers and ways to improve, and Weidman believes that at the end of the day, this loss will end up being the best thing that ever happened to him.

“At the time, I would have punched you in the face for saying that, but it really has,” Weidman laughed when asked about his stance on his loss being a net positive. “It’s allowing me the opportunity to reach my full potential and train things that I wanted to train
“Now I’m just changing things up and I’m just so motivated and excited for this next fight to have redemption and take that belt back.”

The biggest change Weidman has made is doubling the length of his training camps, shifting from six weeks of preparation to a 12-week camp in advance of the rematch.

One of the reasons for the adjustment is the broken foot Weidman suffered on the first day of his camp for December’s fight against Rockhold. The injury limited how he was able to prepare and impacted his performance on fight night, and while he had overcome injuries and sub-optimal conditions heading into fights in the past, Weidman wasn’t able to do so against the American Kickboxing Academy standout, so he’s switching things up. 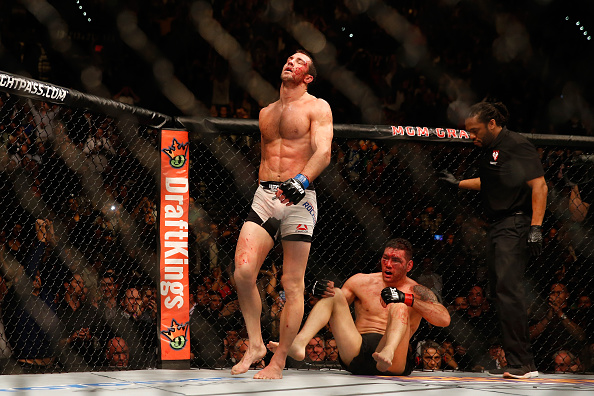 “The thing is, fighters go in beat up and I’ve been through some tough fights, probably worse than a lot of people,” said Weidman, who made his UFC debut with broken ribs, endured a grizzly weight cut in order to face Demian Maia and defended the middleweight title against Lyoto Machida with a broken hand. “Having those experiences maybe allowed me to put myself in a situation thinking I could just get through it and I couldn’t.

“But I’m not blaming it all on the foot,” he added. “At the end of the day, he was better than me that night and I walked into that cage to win and I lost. But I know one thing: I’m not doing six-week camps anymore; I’m doing 12-week camps and going to start getting into shape earlier so that even if I do get hurt, it’s not the end of the day.”

In the build-up to the first fight, Weidman and Rockhold went back-and-forth with each other in the media, each man stating their case for being the superior talent and why they would emerge victorious at UFC 194. It wasn’t trash talk as much as it was two elite competitors with a healthy dose of respect for their opponent positing what would set them apart on fight night.

Don’t expect any of that this time around though.

“I’m done with him; I’m done being nice to him,” Weidman said of Rockhold. “He’s talked crap behind my back too much. I’m going out there and I’m going to beat his ass; that’s it. I’m going to get that belt back.

“It was too surreal to lose that fight. It’s too surreal to look up and he has my belt on and I’m lucky and blessed that I have a short amount of time to wait until I have the opportunity to get that right back.

“If I had to pick one person not to lose to, it’s Luke and that was before that last fight,” he added. “I lost and now his head’s gotten even bigger. That was my fault and I have to do something about that; it’s my responsibility. That’s not my main focus at all, but it’s there – this guy needs to be humbled.”

With a rematch on the way and a potential Weidman victory leveling the series at one win each, the possibility exists that the two middleweights could end up fighting each other three times, maybe more, with the UFC title hanging in the balance, but Weidman doesn’t see it that way.

“We don’t know that there is going to be a third. I go out there and completely annihilate him, people may not want to see a third,” he said. “I want this fight more than any fight I’ve ever had. Whatever happens after that is going to happen, but I’m just doing everything I possibly can to beat him now more than ever.

“I cannot go into that fight and lose.”