Weidman to Speak at Summit in NYC 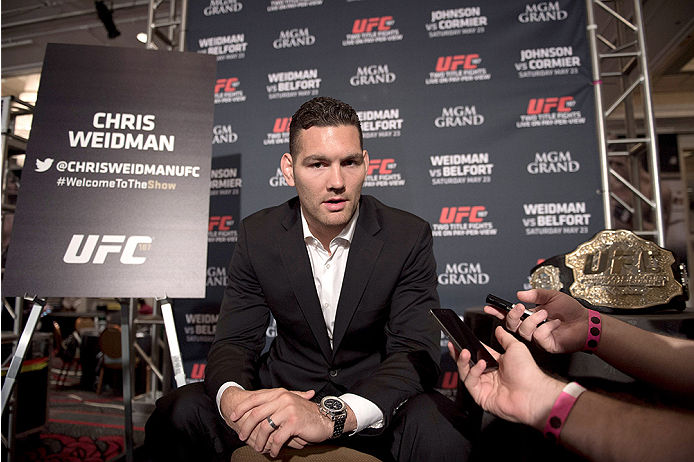 Mixed martial arts used to be the outsider in professional sports, often seen more as a spectacle than a home for the elite of the athletic world. In the last several years though, thanks to the efforts of the UFC and Olympians such as Ronda Rousey and Daniel Cormier, as well as a roster full of fighters who compete at the highest level night in and night out, MMA is no longer on the outside looking in.

On Wednesday, July 1, it will be another example of how far the sport has come, as unbeaten UFC middleweight champion Chris Weidman speaks at the prestigious Leaders’ Sport Performance Summit in New York City.

“It’s very humbling to be the one chosen from the UFC to share my experiences and the knowledge I’ve gained over the years to help other people,” Weidman said of the summit, which will bring together top experts and athletes from around the globe to - as the Leaders website explains - speak about “competitive advantages, uncover hidden opportunities and inspire excellence in sport.”

Joining Weidman will be his renowned coaches, Ray Longo and former UFC welterweight champion Matt Serra, in addition to leading lights from the NFL, NHL, NBA, the Juilliard School, English Premier League soccer, and the NCAA. And as Weidman puts it, he will be there to learn as well as educate.

“The greatest thing about being asked to do this is not that I get to speak, but I get to listen to others speak as well,” he said, but when he does take to the podium, expect the 31-year-old Long Islander to let his fellow attendees know the important lessons they can take from his sport.

“It’s such a new sport and I’m just really happy that it’s starting to get the recognition it deserves,” he said. “I feel like it’s the ultimate competition an athlete can put themselves through, mentally and physically, and I think every athlete has that side of them, that part of their ego that wants to prove that they’re tough and strong and capable of competing on the highest level. Our sport gives that one-on-one opportunity to show that.”