Weidman, Laprise and Ray give back; teach MMA to Special Olympics athletes

A recovering but eager Chris Weidman had to be reminded several times to dial it back Thursday afternoon at 100% Martial Arts school where the former middleweight champion appeared to host an MMA demonstration for Special Olympics Ontario athletes.

Weidman was joined by UFC lightweights Chad Laprise and Stevie Ray, who took on the coaching duties as Weidman surveyed the athletes just eight days after neck surgery.

The fighters made the trip on behalf of the We Are All Fighters campaign, part of the new UFC social responsibility initiative designed to make a positive impact in communities the UFC visits. 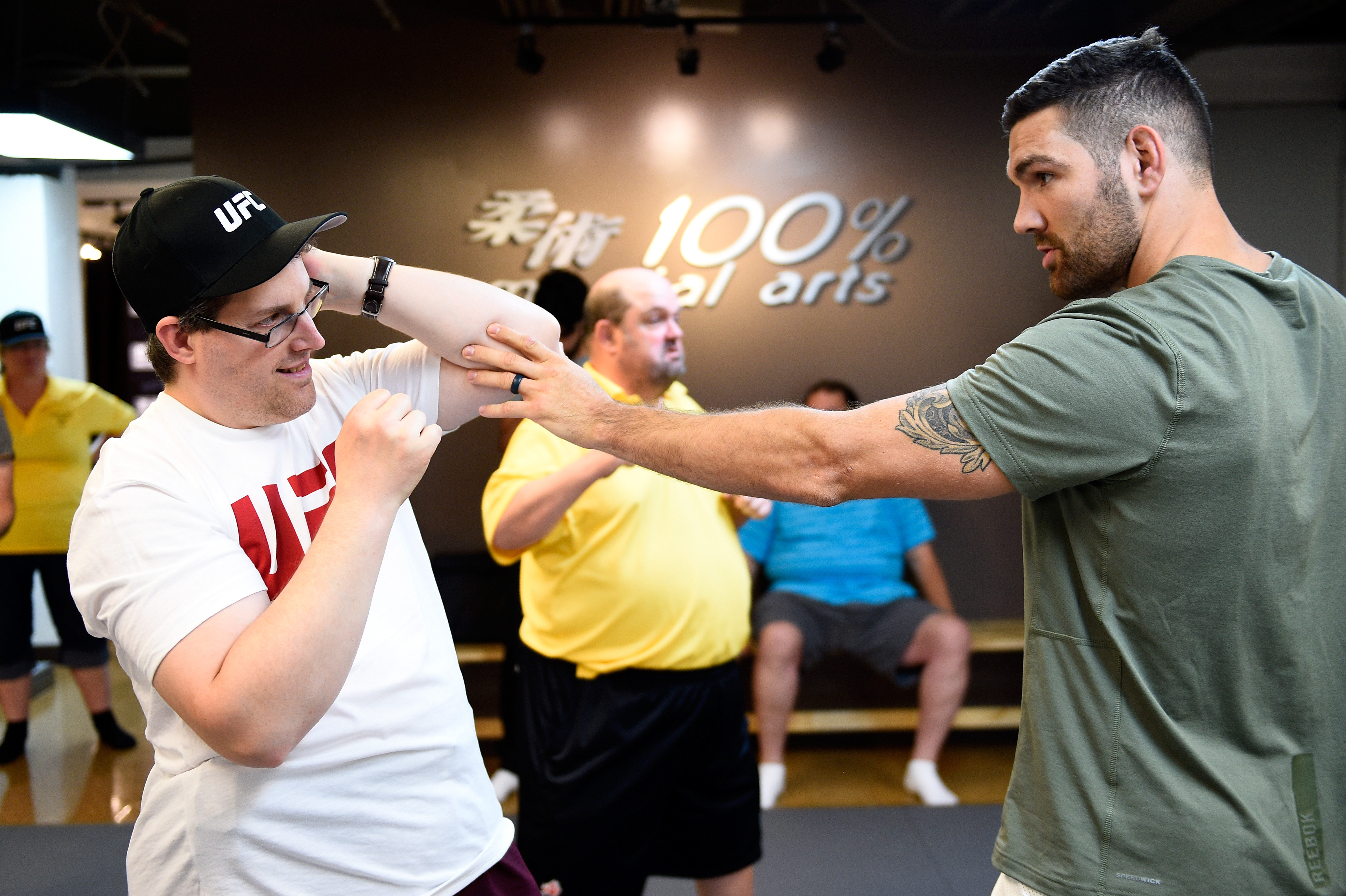 “It’s just weird to be on the mat where I feel so comfortable and used to working out,” Weidman said. “I was even in athletic gear but I did just get surgery on my neck so I have to be careful.”

The Special Olympics athletes were having such a good time that Weidman wanted to be involved and share in their joy. The New York native was impressed with the crop of talent among the Ontario group.

Of the 11 Olympians that took part in the seminar, two are set to go to this year’s World Championships in Austria and one is coming off a gold and silver medal performance at last year’s championships in Korea.

The star of the day was Brandon Terrell. The athletics expert, who is a top performer in the 100 and 200 meter sprints and the shotput, made coach Laprise work the entire session. Terrell was ripping off some blistering fast and powerful leg kicks that had the former The Ultimate Fighter: Nations winner in awe.

“This kid was an animal – it was unbelievable,” Laprise said. “He picked it up so fast and it’s just a pleasure. I love teaching martial arts so to teach anybody that wants to learn is definitely a joy for me.” 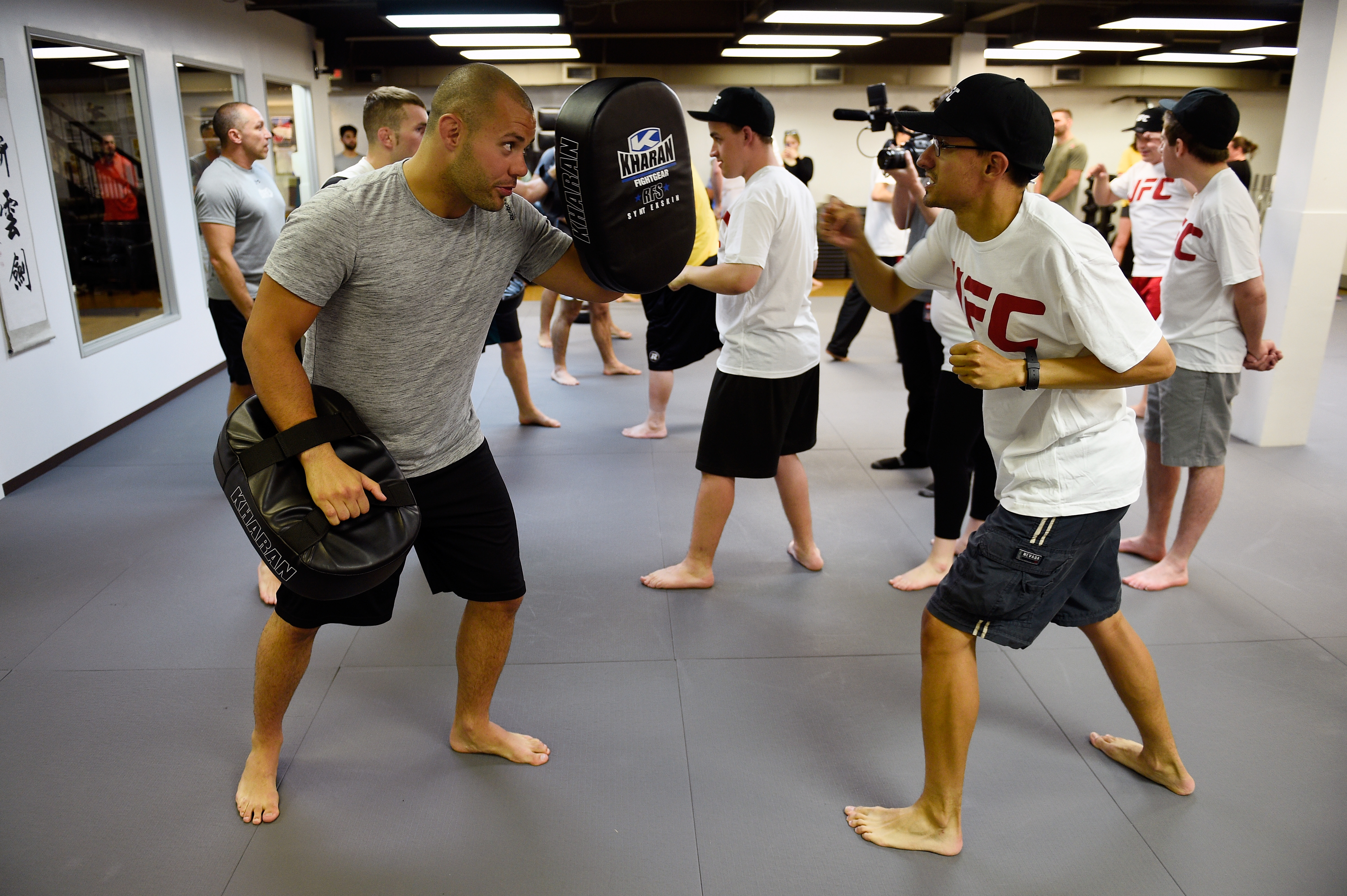 Laprise sees a bright future for himself as a coach. “The Disciple” has instructed Special Olympics athletes before and had a smile from ear to ear watching his students learning and having fun.

“Fighting is a big part of my life right now but coaching is going to be a big part afterwards,” Laprise said. “Anytime I get to do this is definitely awesome for me.”

Weidman expects to be back to MMA training in about six weeks as he targets a return to the Octagon for UFC 205 in New York City. That’s the dream.

In the meantime, Weidman is in Ottawa to corner main event star and family member Stephen “Wonderboy” Thompson (Weidman’s sister recently married Thompson’s brother) against Rory MacDonald. “The All-American” said he is always trying to do as much charity work as possible.

“I could always do more charity work, but there’s nothing more important than being able to give back to the community,” he said. “Actually having people care about having you around and be able to make a difference is really what it’s all about. It’s an honor and a pleasure to be here.”