In part one of his weekend musings, Michael DiSanto looks back at Saturday's TUF 16 finale card... 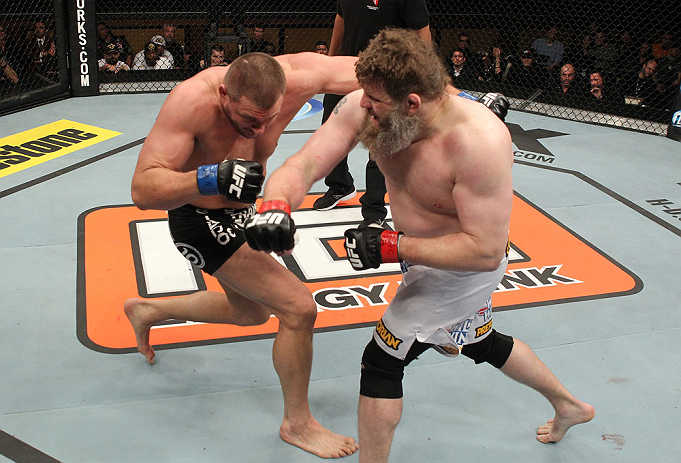 Is there any question that Roy Nelson appears to be the most out of shape athlete on the UFC’s roster? Even though he has dramatically reduced his midsection from a Buddha to a serious beer belly, he still appears more couch potato than professional fighter. Yet, Nelson proved once again that he is among the heavyweight division’s top contenders by savagely knocking out rising star Matt Mitrione.

Both Nelson and Mitrione looked great during the opening moments of the fight. Nelson stalked as his foe remained light on his feet. Both threw crisp punches as they moved and looked to change angles. Then, Nelson uncorked a perfect counter right uppercut that landed right on the button.

It’s amazing that a guy who only started formal striking training in 2009 has that sort of show-stopping power. I know. I know. Punching power is a birthright, not a product of training. There is no denying, however, that proper technique maximizes one’s natural explosive power. Nelson doesn’t display the best technique in the world, which suggests that he could possibly crank up the volume on his already elite hammers.

I’m not sure that he is ready to compete with champion Junior dos Santos in a rematch, number one contender Cain Velasquez or apex predator Alistair Overeem. Then again, with Nelson’s power, it would be silly to think that he is incapable of stopping any of those men with a single shot. He might not be at the level where he can beat those guys more often than not, but on any given night, Nelson absolutely has the chops and pop to beat any heavyweight in the world.

The Nevada State Athletic Commission Rules of Unarmed Combat provide, in relevant part, that “[t]he Commission’s representative shall determine whether…head or facial hair …will interfere with the …conduct of the contest or exhibition.” If so, the offending party may not compete in bout, unless “the circumstances creating the…potential interference [is] corrected to the satisfaction of the Commission’s representative.”

The Commission does a great job of controlling long hair. Fighters must braid it to avoid the hair becoming an issue, whether getting caught in an opponent’s hands, thereby resulting in an illegal hair pull, or somehow impairing the vision of an opponent. Yet, the Commission seems to take a completely passive attitude toward beards.

I’m sure experts abound on both sides of the argument, but it is tough for me to believe that Nelson’s beard doesn’t create some sort of advantage. Is it that tough to assume that a multi-inch-thick beard, like the one currently sported by Nelson, or the one previously sported by 205-pound champion Jon Jones, doesn’t create the same effect as another ounce or two of padding?

If that is an illogical thought, then why are the gloves held to such an exacting standard in terms of ounces of padding?

What are your thoughts?

Colton Smith is an active-duty Army Ranger. He is also the newest winner of the UFC’s reality show “The Ultimate Fighter.” For those who don’t know, the Rangers are the best of the best among the U.S. Army. They are Special Forces combat soldiers who are tasked with accomplishing the impossible.

Smith defeating Mike Ricci certainly didn’t qualify as accomplishing the impossible. After all, Ricci is a natural lightweight who competed against men one weight class heavier just for the opportunity to display his skills on cable television. Nonetheless, Smith’s domination of Ricci to cap off a perfect run through the TUF 16 tournament was definitely improbable.

It remains to be seen whether Smith will become relevant in the welterweight division, or if his star will quickly fizzle out like some TUF winners before him. Whatever happens, I’m sure his Army brethren, particularly those who share the special bond of being a member of the Rangers, are beaming with pride right about now. For my money, Smith winning was the feel good story of the night.

BARRY IS POSSIBLY THE MOST EXCITING HEAVYWEIGHT IN THE SPORT TODAY

I’m not going to revisit my “move south” campaign. Anyone who regularly reads this column knows how I feel about Barry continuing to compete at heavyweight. I’m going to let that one go for now and focus on a different glaringly obvious conclusion of Barry’s UFC career to date: This guy is arguably the single-most exciting heavyweight in the sport today.

That is a daring statement, I know. Many probably think I’m absolutely nuts. This guy is the ultimate home run hitter. Not the Miguel Cabrera triple crown type. The Dave Kingman strike out or bomb it over the fence type. The numbers agree.

Barry sports a .500 record after 10 UFC bouts. Six of those 10 fights ended with a spectacular knockout – four resulting in a Barry win. Each of those were worthy of a post-fight bonus, despite the fact that only two were bestowed the honor. Three of those 10 fights ended with a submission – Barry ending up on the wrong end of the stick each time. And the remaining bout was brutal bludgeoning over 15 minutes dished out to Joey Beltran, probably one of only two men on the earth who could have lasted through that onslaught (Nelson being the other).

Barry’s penchant for winning or losing inside the distance isn’t a coincidence. He takes tremendous chances in search of the knockout. That leaves him exposed to be knocked out himself and certainly makes it much easier to be taken down. It’s not the best way to compete, if one wants to put together an Anderson Silva-like winning streak. But it is a fantastic way to compete, if one wants to continue getting invited back in marquee matchups, regardless of the outcome of his fights.

I don’t care if Barry is a top contender. This .500 fighter will remain at the top of my heavyweight must-see TV list for as long as he competes.

WATCH OUT FOR POIRIER

I’ll keep this one short and sweet. I think Dustin Poirier is the best featherweight in the UFC not currently wearing a belt.

Intentional pause while readers hammer the comment section with flames…

OK, back to business.  I know the division is full of incredibly tough guys like Chad Mendes, Ricardo Lamas, Dennis Siver and the “Korean Zombie,” Chan Sung Jung, among others. I also know that the Zombie submitted Poirier back in May. But that was a fight that could have gone either way, but for a single mistake. If those two fought again, I’d be betting on Poirier, to be honest.

I also know that Poirier doesn’t have the world’s best takedown defense, so someone like Mendes should give him lots of problems.

I don’t care. Poirier seems to have that extra something that I haven’t seen in a while. I don’t know why. I can’t accurately describe it with the written word. It’s just a feeling that I get from watching him compete Maybe I’m a sucker for a great documentary. I loved “Fightville.” If you haven’t seen it, I highly recommend downloading it on Netflix or searching your cable/satellite guide for the next showing.

Poirier remains raw, which is to be expected for a 23-year-old fighter. Give him another year or three, and I truly think he will wear UFC gold, whether at 145 or 155.