Taking a look back at last weekend's events in Phoenix and Las Vegas... 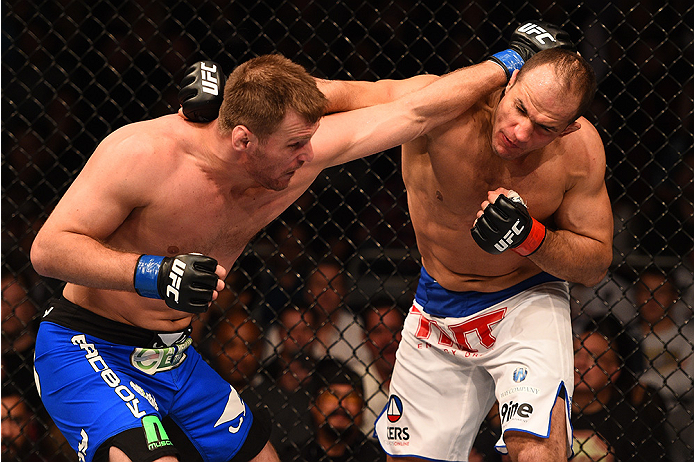 THE ART OF WAR
One of the greatest takeaways I had from my brief (very brief) amateur boxing stint was that what you saw on television wasn’t as easy as you may have thought it was before. As an example you can try at home, stand up and put your hands up in a defensive posture and hold them there for three or five minutes. Not easy, right? Now do that while moving around a ring or Octagon with someone trained to beat you swinging at your head. It’s why, despite the keyboard warriors’ insistence otherwise, there are no cowards in combat sports. Then again, there are those who seemingly have an extra chamber in their heart, a reserve that makes them push beyond what any of us civilians would want to in the name of sport. Junior Dos Santos and Stipe Miocic fit that description. For 25 minutes on Saturday night, they put on a grueling, sometimes brutal, display of what heart means in a fight. Dos Santos got the victory, some said it could have gone Miocic’s way, and it was so close that it could have gone to either fighter, but the lasting impression of their fight was just that – the fight – and it was an honor to watch it.

JDS’ FUTURE
After Dos Santos’ punishing 2013 loss to Cain Velasquez, some wondered whether he would ever be the same fighter again. Yet even after a year-long layoff and a slow start against Miocic, JDS proved that he is still an elite heavyweight. My concern is that for all the desire the Brazilian has to win, his face doesn’t seem that it wants to go along for the ride. Cuts are seemingly a regular occurrence now, and that could prove costly in the future. As for his tendency to get into punishing wars with the best in the game as of late, any fighter knows that you only have a few of those in you over the course of your career, and if JDS wants to get his title belt back, a focus on the other aspects of his game: groundwork, defense, a more varied striking attack, will help get him another title shot sooner rather than later.

DOS ANJOS
Finally, Rafael dos Anjos is starting to get the attention he deserves after back-to-back wins over Benson Henderson and Nate Diaz, but the fight that made me see him as a legit threat to the lightweight crown was his June win over Jason High. For the longest time, Dos Anjos was the “jiu-jitsu guy,” with his stand-up being serviceable but not world-class caliber. But in the High fight, you could see that all that hard work in the gym had paid off, and I don’t know if it translated to television, but live, you could hear and almost feel the pop on his punches. The wins over Henderson and Diaz confirmed how far he had come, and while I wouldn’t pick him to beat champion Anthony Pettis just yet, if the two meet in 2015, I know it’s going to be a fight.

MITRIONE VS. OVEREEM?
Matt Mitrione made a huge statement in his knockout win over Gabriel Gonzaga, as he proved that he had the tools to beat an A-level foe. The victory opens up a whole new world of possibilities for the former NFL lineman, and what better way to jump into this next chapter of his career than with a bout against Alistair Overeem, who resurrected his career with a first-round finish of Stefan Struve? Both have the ability to end a fight with a single blow, there’s some heat between the former teammates, and it could be a bout that thrusts the winner into the title picture for sometime late next year. And yeah, this one wouldn’t be going the distance.

QUEEN CARLA
Raise your hand if you knew Carla Esparza was going to win the UFC women’s strawweight title the moment she entered the Octagon to Metallica’s “Harvester of Sorrow.” Yeah, me too. But seriously, after weathering an early assault from rising star Rose Namajunas Friday night, Esparza showed why she’s the best in the world at 115 pounds. It was a win many expected, but not in the fashion she did it, and while the UFC’s newest division is stacked, if Esparza continues fighting the way she did against Namajunas, she may reign for a long time.

BOO???
I’m still a little confused as to why fans at The Palms were booing the decision in the Charles Oliveira-Jeremy Stephens fight. When you nearly finish your opponent several times and have him playing defense for most of the fight, that’s a dominant win, not a boo-worthy verdict. Yes, I get it, Stephens is a fan favorite and he was going for it in the final round to try and turn things around, but you can’t dismiss what happened before that, and for most of the fight, Oliveira dominated.

HELLO LADIES
While heavyweights Dos Santos and Miocic left a lasting impression, last weekend’s action also got a jolt from the UFC’s lightest division, as the strawweights took center stage on Friday and Saturday. On Saturday, Carla Esparza’s first title challenger may have been determined when Joanna Jedrzejczyk took a split decision win over Claudia Gadelha. Now don’t get me wrong, Jedrzejczyk is a helluva fighter and I love watching her compete, but I scored the bout for Gadelha, and I’m not alone in that assertion. Yeah, the first round knockdown by Jedrzejczyk was a biggie, but the next two rounds were controlled by Gadelha and should have been rewarded as such. I’ve got a feeling this isn’t the last meeting between the two though. As for the big strawweight spectacular, that was on Friday night in Las Vegas, and while Esparza’s win over Namajunas stole the show and the headlines, I was also impressed with all the winners among the ladies: Angela Hill, Aisling Daly, Tecia Torres, Joanne Calderwood, Heather Jo Clark, Felice Herring, and Jessica Penne. This is going to be a fun division to watch, that’s for sure.