Looking back at last weekend's events in Halifax and Stockholm... 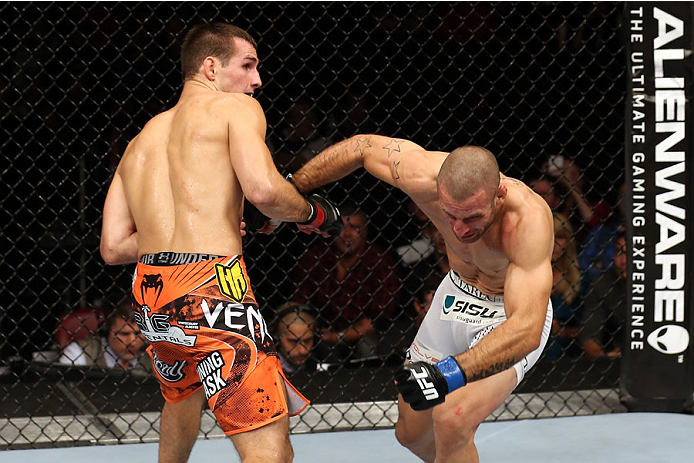 RORY’S NEXT
It seems like Rory MacDonald has been groomed for the UFC welterweight title since the day he put on the gloves for the first time, yet finally, it appears as if “Ares” is hitting his stride when he needed to most. And though I hate putting the “must win” tag on 25-year-old, if he would have lost to Tarec Saffiedine in Halifax last Saturday, his title hopes would have taken a severe hit – probably one that would put him a year behind in his quest for the belt. The Canadian’s demeanor didn’t show him wilting under that kind of pressure in the lead-up to the bout, but he had to have felt some of it. Regardless, he fought a patient, technical, yet compelling fight against Saffiedine, eventually finishing him in the third round. Now the waiting game begins for the winner of December’s Johny Hendricks-Robbie Lawler bout, and while some have talked of MacDonald fighting again, this timing is almost perfect for an early 2015 title fight should the winner of the UFC 181 main event emerge unscathed from their bout. I’d love to see a rematch between MacDonald and Lawler or a bout with the challenger and Hendricks. Either way, the eyes of the MMA world will be on this one to see if MacDonald lives up to the potential we saw in him all those years ago.

ASSUNCAO AND THE TITLE
MacDonald was pretty much going to secure a shot at the welterweight belt with a win over Saffiedine, no matter how he did it. In the bantamweight division, Dominick Cruz will be getting a shot at regaining the belt he never lost in the Octagon, and rightfully so, but there’s something in my head that says if Raphael Assuncao’s seventh win in a row, against Bryan Caraway, was spectacular in some way, shape, or form, it may not have swayed the UFC brass to give the next shot at champion T.J. Dillashaw, but it could have started an interesting conversation at least. That didn’t happen though, and while Assuncao did win the bout clearly, he didn’t do something that would get the fans on his side and talking. Is he next after Cruz? With a seven-fight winning streak he most certainly should be, but it’s also very possible that he will have to fight again before getting his crack at the belt, and in this game, one wrong move can turn a guaranteed title shot into a move to the bottom of the contenders’ list.

GAGNON
Making a statement at 135 pounds was Mitch Gagnon, who took a little over two minutes to finish late replacement Roman Salazar and pick up his fourth straight win. Gagnon is fun to watch, he’s always looking to finish, and his only loss since 2009 was a Fight of the Night defeat against Caraway in his 2012 UFC debut. If the UFC can put together the original match for the Halifax card between Gagnon and New York prospect Aljamain Sterling, that’s a bout that could steal Fight of the Night honors in a flash.

TUMENOV & MUNHOZ
Nothing gets a fight night off to a better start than a couple fast and furious finishes, and Pedro Munhoz and Albert Tumenov did their part in Halifax with victories over Jerrod Sanders and Matt Dwyer, respectively. Combined time of their bouts? 1:42. More importantly, when you win like that, everyone wants to see your next fight.

KELADES & ROSA
Chris Kelades and Charles Rosa were relative unknowns a week ago. Today, fight fans are still raving about Kelades’ win over Patrick Holohan in Halifax and Rosa’s three-round loss to Dennis Siver in Stockholm. Both efforts earned them post-fight bonuses and both came on less than a week’s notice. That’s remarkable stuff right there, and stay tuned to UFC.com for follow-ups with both prospects regarding two memorable Octagon debuts.

STORY
I hope Rick Story is sitting somewhere comfortable, enjoying the spoils of his upset win over Gunnar Nelson in Stockholm last weekend. After a rough year, he earned the win and the good things to come, and in the MMA Lab, he doesn’t just have a team behind him, but a family, and that’s shown in his wins over Leonardo Mafra and Nelson. Yes, I am well aware that as good as your team may be, you still have to fight by yourself, but having peace of mind can do wonders before that Octagon door closes. Story has that peace now, and that’s bad news for the rest of the welterweight division.

CLASS
As the old saying goes, you can’t buy class. Thankfully Gunnar Nelson has more than enough of it to go around. Following what had to be the most disappointing moment of his MMA career, the Iceland native took all the questions of UFC color commentator Dan Hardy with grace, never once denigrating the performance of the man who handed him his first pro loss. Even when asked about the split decision, Nelson could have said that he agreed with the judge who gave him the nod. Instead, he said he was happy with the decision. If you were a fan of Nelson’s when he ran through all his opponents, after this first defeat you should be an even bigger supporter.

HOLLOWAY
It would be cool to title the Max Holloway section “Mad Max,” but he is seemingly so happy all the time it would be impossible to do so. And why shouldn’t he be beaming from ear to ear? He’s won four in a row, all finishes, all in 2014, and he’s still only 22 years old. If you’re from any sort of media outlet and you’re not writing about Holloway, get moving. He’s talented, he shows up to fight every time, he’s a great kid, and he’s got a great story. Sorry if that sounds like I’m his publicist, but if that was my job, there are a lot worse gigs to have, as Holloway’s career is only going up.

UPSETS
That’s why they fight the fights - isn’t that how the fight game adage goes? Well, if we needed any reminders, the wins of Mike Wilkinson and Jan Blachowicz over Niklas Backstrom and Ilir Latifi, respectively, show that on any given night, anyone in that Octagon can win. It’s what makes this the most compelling one-on-one sport out there, and it’s why you never leave your seat when that bell rings, because watching it on replay just doesn’t compare to that live jolt.