In Part II of his Weekend Fight Musings, Michael DiSanto looks back at last Friday's FX event in Australia. 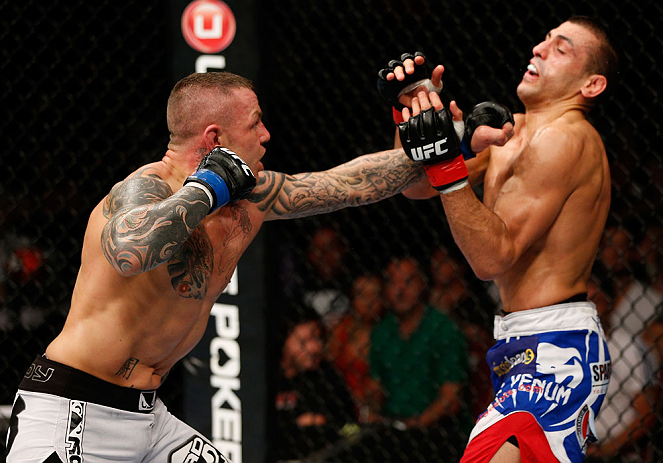 PEARSON RETURNS TO 155 WITH A BANG

At first, I thought it qualified as Ross Pearson’s career-defining moment. Then I recalled that Pearson had defeated Dennis Siver nearly three years earlier in a Fight of the Night effort. I’m not sure which win is more impressive: Siver, because he is widely viewed as a top contender, or George Sotiropoulos, because he served opposite Pearson for a couple months on Australian television in the UFC’s reality show debut in the eastern part of the world. Whatever the case, Pearson’s dominant performance on Friday night returns him to the lightweight division with a ton of momentum.

For my money, I preferred the Brit at featherweight. Maybe he is one of those guys who performs better if he cuts less weight? Maybe he is better off with a little extra muscle, even if his frame is a bit small for the lightweights? I don’t know. All I know is he looked great.

THE SMASHES A SMASH HIT

I enjoyed both TUF Smashes finale bouts. It was also fitting that an Australian and a UK rep won, hopefully bringing both nations deeper and deeper into the sport we all love. With the finals behind us, I’m eager to see how Norman Parke and Robert Whittaker fare in the UFC going forward. It would be great to see one or both make a serious run, which would only further deepen the UFC’s already strong international ties.

THE FANS FINALLY GET TO SEE THE REAL HECTOR LOMBARD

Call it what you will, but Lombard’s split decision loss to Tim Boetsch was an egg. Boetsch is a seriously tough dude who fought a great fight that night. But Lombard didn’t display any of the trademark savagery that made him one of the most sought-after free agents in the sport just a few months prior. He fought with a not-to-lose approach, rather than a win-at-all-costs mentality.

Boetsch’s monster strikes and solid wrestling may have had a lot to do with that. First-time Octagon jitters may have contributed. Who knows? Something wasn’t right, because Lombard left us all scratching our heads wondering if he was, indeed, the monster we all thought he was heading into his debut.

Then everything changed when he stepped into the cage with Rousimar Palhares. Less than four minutes later, Lombard lived up to the tremendous hype that he carried on those massively broad shoulders when he signed with the UFC. A brutal knockout win over an extremely tough opponent was just what the doctor ordered to reinsert the Cuban national into middleweight relevance.

Frankie Edgar will get the next shot at UFC featherweight champion Jose Aldo. But is there anyone who truly deserves to sit atop the division, other than Chad Mendes?

I know. Aldo knocked him out in January thanks to a knee that ended the fight one second before the opening round ended. I also remember that I wrote yesterday that Dustin Poirier was the best in the division, next to Aldo. But Poirier isn’t yet ready for a title shot, in my opinion. He needs an A-list win. Mendes doesn’t have that problem.

The Team Alpha Male standout is now 13-1 in his career, with his lone loss to Aldo. Back-to-back knockout wins in his last two fights have largely erased the bitter taste of championship defeat. Is Mendes next in line after Edgar? Will he face Poirier in an eliminator? Maybe Ricardo Lamas or Hatsu Hioki? Maybe Clay Guida, if the shaggy contender defeats Hioki in his debut?

The featherweight division is quickly becoming one of the deeper divisions in the sport. And it is tough to argue that Mendes belongs anywhere, other than first in line behind Aldo.