This week, It's Fighting, not Football for Roop 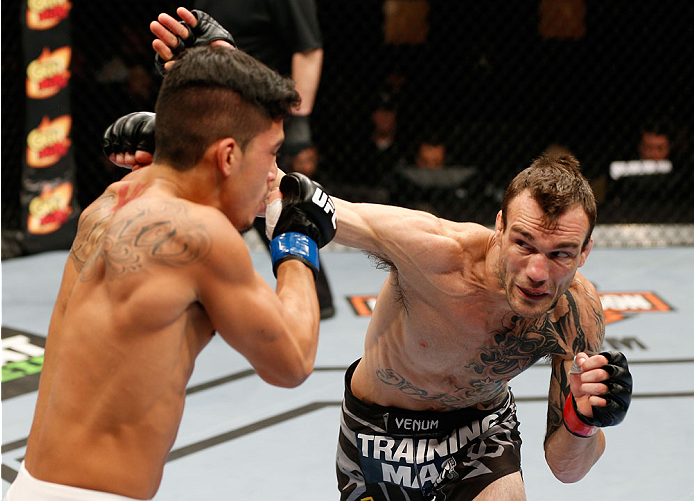 Football season is always the highlight of the year for George Roop and his family, and 2015 is no different.

“I love football, we’re a huge football family, a huge Arizona Cardinals family, and we go all out on Sundays,” the Arizonan said, even though he’s likely going to miss his 2-0 Cards go for three straight this weekend against the San Francisco 49ers.

That’s okay though. DVRs were invented for a reason, and there’s also a good reason why he’ll be out of Tucson and in Saitama, Japan, and that’s his return to the Octagon to face Takeya Mizugaki. It’s Roop’s first start since July of 2014, and it hasn’t been an easy road back.

“I went into the Rob Font fight with a torn LCL,” Roop said of his last bout, a knockout loss at UFC 175. “I tore it five days before that fight, and I could barely walk going into it. I’m not saying it affected me in any way in that fight because I didn’t feel it and I don’t feel like it affected my performance. It just affected my training and my mental preparation that last week.”

The knee injury sidelined him for four months, but as soon as he got the all clear, he was back in the gym, going full speed and hoping to appear in his home state for last December’s UFC on FOX card. But then disaster struck once more in December, and he wasn’t going to be able to shake this one off, as he ripped up his shoulder, prompting surgery in January.

It could almost make Roop long for his own days on the gridiron, where he played four years of varsity ball before genetics simply made a move to the college level an improbable leap for a six-foot-one quarterback.

“When I was younger, like my freshman and sophomore year, I thought I was going to play college ball,” he said. “I had real good speed, and I was an option quarterback, so they used me a lot because I had real good wheels. But I never had the size to make it to college football.”

For most high school athletes, that’s where the story ends, with looking back at the glory days the only source of a smile when it comes to athletics. Roop wasn’t done yet, even if he didn’t know it until years later when he discovered MMA.

“I really felt it was my calling because I didn’t start MMA until I was 23, 24 years old,” he said. “I thought my athletic career was done, and then I started MMA. I had always been interested in it – I wrestled and I did karate when I was younger – but when I started training, I was like ‘man, this is for me.’ And I really feel that’s what’s kept me in the UFC this long. I feel like I could have done a lot more when I was in high school to get to that next level and I always had regrets, and I think I’ve been here this long because I never cut any corners and I have no regrets about any fights. I trained hard for every single one of my fights, and we’re even talking the Rage in the Cage days. I never trained lightly for any opponent.”

Nearly a decade after his first pro fight, the 33-year-old Roop is not just still here, but he’s approaching his seven-year anniversary as a Zuffa fighter (UFC / WEC) on December 13. That’s a run to be proud of, but Roop isn’t just happy to be here.

“A lot of people get complacent and feel that they get to the UFC and they’ve accomplished something,” he said. “I’m not trying to take anything away from those people, because getting here is a big accomplishment, but staying in the UFC and building a career out of it, that’s a harder task. It’s tough to put two wins together in the UFC. You’re fighting the very best of the best.”

Roop has only done it once, beating Reuben Duran and Brian Bowles in back-to-back bouts in 2013. He would go 1-1 in his next two, losing to Francisco Rivera and beating Dustin Kimura, before the upset loss to Font. That makes him 3-2 in his recent return to bantamweight, but if he can get the consistency down, he can cause problems for any of his 135-pound peers, and he knows it. He just has to prove it against Mizugaki, an aggressive striker Roop won’t have to go looking for one the Octagon gate closes.

“I feel like it’s a good fight for me,” he said. “The reason why I’m excited about this fight is that we’ve both fought a lot of the same competition, and I like that he’s a fighter. I know that it’s going to be an exciting fight, and that’s what really gets me motivated to train. I know this has the potential to be a Fight of the Night, Knockout of the Night, or Submission of the Night – this could go anyway for me. This has been the longest I’ve been out of competition, so I’m very hungry to get back and I truly feel that I’m better than I’ve ever been. I really want to make a statement, and Mizugaki’s the perfect guy to do it against, but he’s no easy task.”

Nothing good comes easy, and Roop is well aware of that. So while he’s sacrificing a Sunday date with his Cardinals and making the long trip to Japan, the rewards will outweigh the sacrifices, and he even gets to scratch an entry off his fighting bucket list.

“I always like to fight in Vegas because I like staying close to home and it’s not really a trip when you go out there for a fight,” Roop said. “But I’m a huge Japanese MMA fan, and I really like the fan base of Japanese MMA. I feel like they’re very educated fans, they’re very respectful, and I watched the PRIDE days, so I’m very excited to go to Japan and fight, although it’s a long trip. I know that you can become a superstar with just one fight out there, and I know that they really respect MMA a lot.”