WEC - They Fought There

Some of the biggest names in MMA started in the WEC, take a trip down memory lane as we celebrate WEC month on UFC Fight Pass:
By Walker Van Wey • Dec. 2, 2020

When the average fight fan thinks about the WEC, images that may come to mind are Anthony Pettis landing the Showtime kick in the waning seconds of the final WEC event, Leonard Garcia and The Korean Zombie throwing caution to the wind or Urijah Faber putting Sacramento on the map. Cub Swanson, Dominick Cruz, Joseph Benavidez and many, many more are associated with the WEC.

But it takes a true die-hard to remember some of the biggest names in MMA and the time they spent in the blue cage. Here are a few fighters you may not remember as representing the WEC.

Despite never winning gold in one of the most champion-ready organizations there ever was, few names associate more strongly with Strikeforce than Tim Kennedy. His brief run in the UFC was a success as well, but seven years before his Strikeforce debut, Kennedy made just over a minute of Mack Brewer’s life hell.

Dan Severn’s most notable run came in the early days of the UFC. He was so captivating that UFC 5: The Return of the Beast was named after him. He went on to share the PRIDE FC ring for 30 minutes with Kimo Leopoldo two years later and fought more regional fights than almost anybody to do it. In all fairness, it should come as no surprise that he stopped by WEC for their first main event.

Nick Diaz isn’t some journeyman in MMA who took fights for whoever would take him. Nick Diaz fought for every major promotion under the sun and did damage. 3-1 in EiteXC, the most BJJ-friendly fight of his career against The Fireball Kid in PRIDE, a dominant Strikeforce title run and of course his mark he left on the UFC. Before all of those moments that made us fall in love with the 209, Diaz introduced himself to the WEC by defeating Joe Hurley and winning the inaugural WEC welterweight title.

With some of his best years still ahead of him, it’s almost hard to believe the amount of blood, sweat and tears Dustin Poirier has put into the sport of MMA. Whereas most entries on this list have been fighters from the pre-Zuffa days who stopped by briefly and left, Dustin Poirier got in late to the show and still had as many fights in the WEC as Chan Sung Jung. Had the WEC never merged with the UFC, it’s likely “The Diamond” would have continued fighting in the blue cage. At only 31 years old and a lot of fight left, it’s likely Poirier will carry the WEC spirit longer than any other fighter. 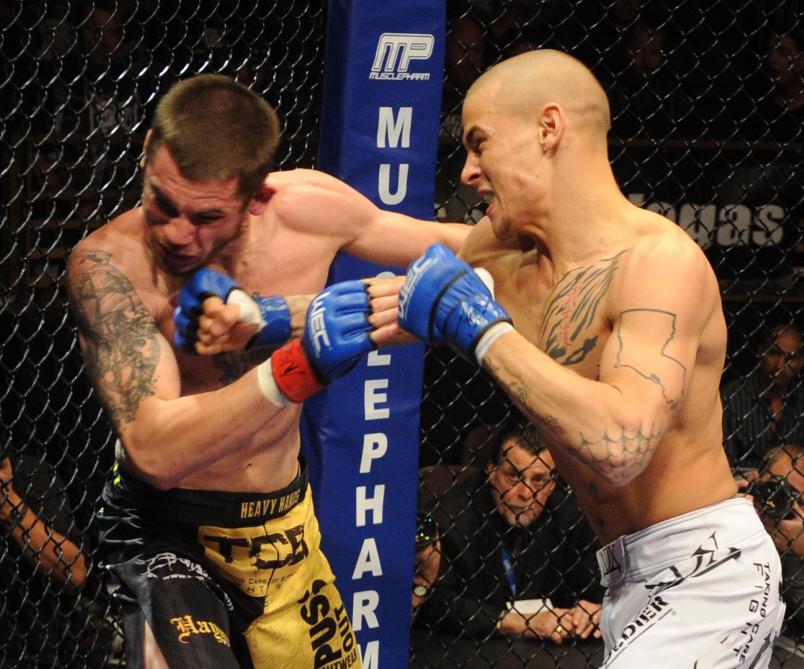 Just about two years before the mainstream media was introduced to one of the biggest personalities in MMA with MTV’s Bully Beatdown, Jason “Mayhem” Miller stopped by the WEC and showed the Las Vegas crowd what 27 other crowds came to know Mayhem for: Grappling domination.

Surprising fact: the WEC had a super heavyweight division at one point. Less surprising fact, Shane Carwin had bigger...everything than the entire division. The man made his MMA debut in the promotion known for bantamweights and featherweights, and Carwin weighed in at 285 pounds, surprising nobody with a good set of eyes when he made Carlton Jones tap to strikes.

Where hasn’t Clay Guida been? Billed as “Clayton Guida,” he got bored of fighting in every city in the Midwest and took an enormous step up in competition and won Strikeforce gold. After losing his Strikeforce title, Guida made his lone WEC appearance at WEC 23 in a winning effort that would land him in the UFC two months later.

Few people in the UFC are surging as hard as Glover Teixiera is right now. With wins over Jared Cannonier, Rashad Evans, Anthony Smith, Thiago Santos and many, many more it’s unrealistic to say that it would have never happened if it weren’t for the WEC, but it definitely started with the WEC. Teixiera made his MMA debut at WEC 3 and although it was a losing effort, he returned four years later to avenge that loss by winning three straight by way of first round finishes.

Check out the entire WEC library, ONLY on UFC FIGHT PASS!