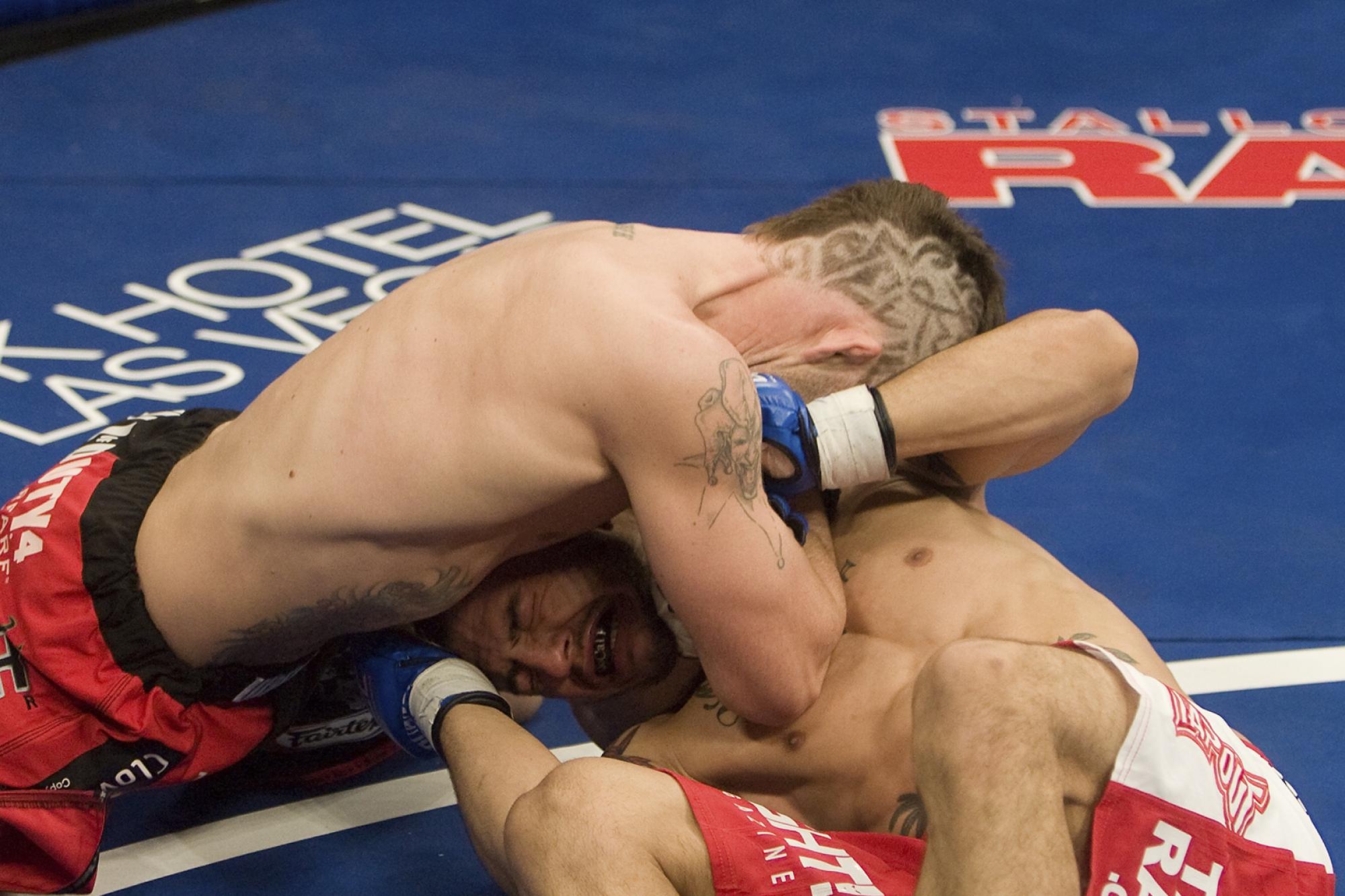 80. Nick Diaz Wins Inaugural Gold – WEC 6: Less than six months before introducing the UFC world to the 209, Nick Diaz made his one and only stop in the WEC, where he would upset Joe Hurley with relative ease to take home the first ever WEC welterweight title. And while his subsequent accomplishments made him a star, don’t forget this hidden gem of an accomplishment.
Nick Diaz vs Joe Hurley here: https://ufcfightpass.com/video/33606/nick-diaz-vs-joe-hurley-wec-6

79. Rerouting the Course of History? – WEC 49: Kamal Shalorus gave the WEC two absolute landslide wins in his first two WEC bouts. Recognizing the obvious threat to the division, the powers that be gave Shalorus a huge step up in competition with Jamie Varner. Shalorus controlled most of the fight before landing a groin strike that would cost him a point. By the end of the three-round fight, the judges scored the fight 29-27 for Shalorus, 29-27 Varner and a 28-28 draw. Already receiving main event treatment and a giant leap in competition, is it possible had the groin strike never cost him a point that WEC 53 features a Benson Henderson vs Kamal Shalorus main event and the world never sees the Showtime Kick?
Jamie Varner vs Kamal Shalorus here: https://ufcfightpass.com/video/33642/jamie-varner-vs-kamal-shalorus-wec-49

78. Rogan and Goldie Stop By – WEC 48: The WEC proved their legitimacy to most of the lingering doubters of the promotion when Joe Rogan and Mike Goldberg stopped by for commentary duties and left blown away by one of the most raucous cards in the promotion’s history.
WEC 48 here: https://ufcfightpass.com/video/33285/wec-48-aldo-vs-faber

77. Jewtuszko’s One and Done – WEC 50: Maciej Jewtuszko came to the WEC cage 7-0 after his early career tour of Europe. Jewtuszko came to the fight capital of the world for just over 90 seconds, as he put on one of the most exciting fights in the promotion’s history, complete with a spinning backfist and KO of the Night honors. Despite the immediate success, Jewtuszko never returned to the WEC or the United States after the fight.
Maciej Jewtuszko vs Anthony Njokuani here: https://ufcfightpass.com/video/32497/maciej-jewtuszko-vs-anthony-njokuani-wec-50

76. Hot Lips – WEC 17: Not sure where the bad blood came from, there possibly never was any, but there sure was intensity when Justin Levens met Jorge Oliveira in the center of the cage in the final faceoff before the fight. The night’s referee had 100% faith in the situation as he stepped away while Levens and Oliveira shoved, stared and then Levens landed a couple kisses on the face of Oliveira. Luckily for the sake of the story, Levens was able to score one of the most impressive finishes a fight fan could ask for when he knocked Oliveira out with a first-round slam KO.
Justin Levens vs Jorge Oliveira here: https://ufcfightpass.com/video/33561/justin-levens-vs-jorge-oliveira-wec-17

75. Speer and Loathing in Las Vegas – WEC 27: It was hard for the TUF producers to ignore the 10-1 wrestling standout Tommy Speer as he battered his way up the Midwest rankings. It was impossible for them to ignore Speer when he landed a ground-and-pound KO so vicious even Mark Coleman would ask for pointers.
Tommy Speer vs Sidney Silva here: https://ufcfightpass.com/video/33500/tommy-speer-vs-sidney-silva-wec-27

74. Rhino gets steamrolled – WEC 15: Doug Marshall might have had the most fitting nickname in MMA history. Not to say he didn’t have a ground game, but he came to bull rush and sink his fists into face every time he walked out to the cage. He found somebody equally game, and James Irvin connected in the second round with a right knee that collapsed Marshall.
James Irvin vs Doug Marshall here: https://ufcfightpass.com/video/32935/james-irvin-vs-doug-marshall-wec-15

73. A Diaz taps??? – WEC 24: A total of 69 men have fought the Gracie BJJ black belts Nick and Nate Diaz. Only one man has ever made either of them tap: Hermes Franca with the most impressive armbar of his entire career at WEC 24. He took the WEC lightweight title home that night, but nothing sits higher on the mantle than the submission itself.
Hermes Franca vs Nate Diaz here: https://ufcfightpass.com/video/32730/hermes-franca-vs-nate-diaz-wec-24

72. It Only Takes One – WEC 42: With wins over fighters such as Dustin Poirier and Joe Stevenson, it’s hard to accuse Danny Castillo of “stealing a win” but it sure felt that way when Ricardo Lamas was imposing his will for almost two full rounds only to eat a punch he couldn’t come back from with less than a minute left in the round.
Danny Castillo vs Ricardo Lamas here: https://ufcfightpass.com/video/32972/danny-castillo-vs-ricardo-lamas-wec-42

71. Double Debut Showdown – WEC 36: There’s got to be a reason two debuting WEC fighters opened up the main card, right? Yes. Jake Rosholt and Nissen Osterneck put on possibly the most fast-paced middleweight fight in the history of the promotion.
Jake Rosholt vs Nissen Osterneck here: https://ufcfightpass.com/video/32560/jake-rosholt-vs-nissen-osterneck-wec-36

70. The King is Back – WEC 25: The fans were in for a treat when they were introduced to Urijah Faber at WEC 19. When Faber defended his title in a performance nothing short of dominant over Joe Pearson, the fans knew he wasn’t a one-time rental. The California Kid was here to stay and to give them something to cheer for night in and night out.
Urijah Faber vs Joe Pearson here: https://ufcfightpass.com/video/33531/urijah-faber-vs-joe-pearson-wec-25

69. A Boy Named Karen – WEC 44: Beginning to trade wins and losses, the still dangerous “Razor” Rob McCullough was excited to make an example of newcomer, Karen Darabedyan. Both men were given all they could handle and the judges awarded a split decision victory to Darabedyan.
Karen Darabedyan vs Rob McCullough here: https://ufcfightpass.com/video/32866/karen-darabedyan-vs-rob-mccullough-wec-44

68. Bowles’ Barrage – WEC 31: Coming into the fight between Brian Bowles and Marcos Galvao, everybody knew there was likely a finish on the horizon. The further you got in and you saw Bowles’ fists chasing down the face of Galvao, you knew it was only a matter of time. Finally, a barrage of strikes was the straw the broke the camel’s back.
Brian Bowles vs Marcos Galvao here: https://ufcfightpass.com/video/32032/brian-bowles-vs-marcos-galvao-wec-31

67. Munoz Cuts the Lights Out – WEC 34: The Filipino Wrecking Machine, Mark Munoz, had no interest with getting face time in the WEC Octagon. His strategy to keep the fans’ interest was to give them three rounds worth of action in less than a round. After only two fights in the WEC and two finishes, you could say his strategy worked. His WEC debut against Chuck Grigsby was the performance of a seasoned veteran, not the three-fight rising star who delivered it.
Mark Munoz vs Chuck Grigsby here: https://ufcfightpass.com/video/33495/mark-munoz-vs-chuck-grigsby-wec-34

66. Showtime Second Coming? – WEC 52: If Erik Koch never told you he was a Duke Roufus product, his performance would have. Anthony Pettis’ roommate paid perfect homage to Showtime with a textbook head kick that Pettis may have felt obligated to top in his fight at WEC 53.
Erik Kock vs Francisco Rivera here: https://ufcfightpass.com/video/33335/erik-koch-vs-francisco-rivera-wec-52

65. Poppies’ WWE Audition – WEC 14: You want to talk about over-the-top promoting, look no further. To promote the co-main event of WEC 15, the WEC brought the fighters out before the WEC 14 main event to face off in the cage. It went exactly as well as you’d imagine when Poppies Martinez and rumors of internet chatter is present. A scuffle ensued and it was only a few moments before Cole Escovedo was calmly restrained and Poppies Martinez was keeping every Tachi Palace security guard busy. Luckily, it ended with the two discussing their issues with one another, but there were definitely no more in-cage face offs after WEC 14.
WEC 14 here: https://ufcfightpass.com/video/31362/wec-14-vengeance?playlistId=1625

64. One Round War – WEC 45: Brandon Visher and Courtney Buck put on one of the wildest one-round wars in the promotion’s history.

63. Corkscrew KO – WEC 36: There’s very few things on Earth better than a perfectly timed KO. When David Avellan wound up to throw a KO blow, Aaron Simpson beat him to the punch. Avellan’s mid-punch momentum as his face collided with Simpson’s fist resulted in a highly aesthetically pleasing collapse to the blue mat.
Aaron Simpson vs David Avellan here: https://ufcfightpass.com/video/32555/aaron-simpson-vs-david-avellan-wec-36

62. Flying armbar! – WEC 32: The hometown kid, Coty “Ox” Wheeler, had the crowd screaming at the top of their lungs when his name was announced, and a simple finish just wouldn’t have reached the bar the fans had set. So what’s the solution? How about a flying armbar?
Coty Wheeler vs Del Hawkins here: https://ufcfightpass.com/video/33498/coty-wheeler-vs-del-hawkins-wec-32

61. Prime Benavidez Shows Out – WEC 45: Few fighters have ever been as quick and light on the feet as Joseph Benavidez. One of the best examples of his quickness came when he knocked Rani Yahya back in time to a moment in life where the punch must have not landed yet. While Benavidez was across the cage celebrating, Yahya stood confused, asking officials why they wouldn’t let him fight.
Joseph Benavidez vs Rani Yahya here: https://ufcfightpass.com/video/29964/joseph-benavidez-vs-rani-yahya-wec-45