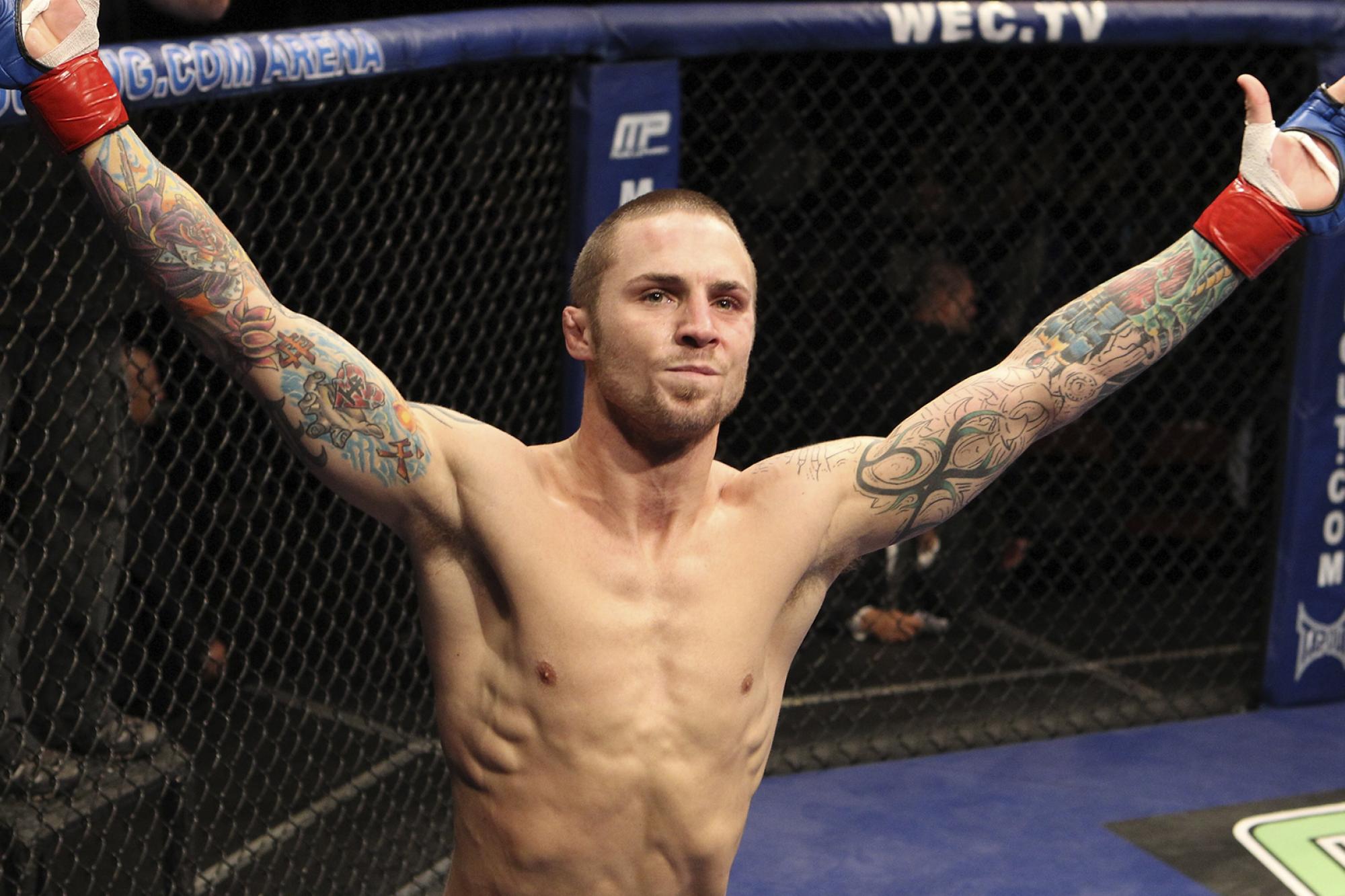 60. The Damacio Show – WEC 43: Damacio Page could possibly have been the most reckless fighter in the WEC. Energy is meant to be spent and Page managed to land and absorb about two rounds’ worth of haymakers in only 62 seconds before finishing off Will Campuzano on the ground.

59. Wineland’s Body Shot – WEC 49: After losing the WEC bantamweight title to Chase Beebe at WEC 26 and being submitted by Rani Yahya in his return to the WEC, the already high-paced Eddie Wineland knew he had to turn heads to successfully land another title shot. What happens when a flashy fighter fights even more aggressively against an aggressive striker? Well, it usually isn’t a decision.

58. Bigg Rigg’s First Bonus – WEC 39: Long before giving us a Fight of the Year with Robbie Lawler, before losing to Georges St-Pierre and long before taking home four straight UFC performance bonuses, Johny Hendricks put on a brutal three-round show the fans would come to expect. He and Alex Serdyukov would take home Fight of the Night honors and Hendricks would make his UFC debut as a result only five months later.

57. Prelim War – WEC 22: WEC was evolving and Johnathan Mix and Mario Rivera welcomed the change with open arms. The prelim fighters both showed that the elevation in both grappling and striking was something they were more than capable of keeping up with. The two put on a 19-minute clinic in wrestling, striking and BJJ. Where the energy came from, we’ll never know.

56. Diaz BJJ Clinic – WEC 21: Many forget that before becoming a superstar in the UFC, Nate Diaz had more fights in the WEC than Demetrious Johnson. His best performance came at WEC 21 when he wrapped circles around Joe Hurley, earning a title shot in the process.

55. Most Notorious DQ Ever – WEC 20: Despite never really putting together a successful MMA career, Mike Kyle is a name that hardcores will likely remember. With stints all over the map, including a pair of UFC wins, Kyle is most famous for having one of the most tasteless disqualifications of all-time against Brian Olsen. It’s not in the spirit of martial arts to glorify a cheap shot…or several… but it’s hard to argue that Mike Kyle’s didn’t have a lasting impact. Kyle was never offered to fight in the WEC or UFC again following the DQ.

54. “Save Fresno Wrestling” – WEC 22: After pushing his record to 3-0, Casey Olson, sporting a “Save Wrestling” shirt, didn’t take time to call for his next opponent, thank sponsors or take in that sweet first-round TKO moment. Instead, he used his platform to plea with Fresno State not to cut the wrestling program that shaped his 14-4 MMA career.

53. Slam! Duh duh-duh! – WEC 53: The butterfly effect is possibly the most impossible thing to predict of all-time but had Anthony Pettis never landed the Showtime Kick in the main event of WEC 53 it’s not unrealistic to assume Eddie Wineland’s slam KO of Ken Stone would have been the final card’s most famous moment.

52. Serdyukov vs Weir – WEC 14: How Alex Serdyukov even survived the first round, let alone won the fight, will remain a mystery until the end of time.

51. Faber’s Show – WEC 28: Urijah Faber has never been one to back down from a challenge. He boxes strikers, rolls with BJJ specialists and slams wrestlers. When Chance Farrar came to the cage with almost every advantage under the sun, The California Kid showed Farrar quickly why he was, is and always will be the king of the WEC and beat him at his own game.

50. Faber vs Jens 2 – WEC 38: After losing the featherweight title to Mike Brown, Urijah Faber needed a big win to put himself back in front of Brown. Former UFC lightweight champion Jens Pulver was also coming off of a loss and the two shared the cage again for another classic showdown.

49. T-Shirt guy – WEC 11: Nobody really gave any chance to Carlos Garcia at WEC 11 when they saw him sporting gym shorts, a T-shirt and a huge size discrepancy. It’s possible that most of the people who actually paid attention to the fight were only watching to see Garcia become a highlight reel victim for the giant, Seth Woodill. Au contraire. Garcia landed a right hand that would not only send Woodill faceplanting but also made the Tachi Palace explode. Woodill never fought again.

48. “I don’t know if this is such a good idea…” – WEC 32: After pushing through Charlie Valencia’s pressure and volume, Yoshiro Maeda appeared to be simply surviving when he finally escaped Valencia’s control. The two met in the center of the Octagon and Maeda began taunting Valencia. The ill-advised move paid off when Maeda landed a fight-ending body kick seconds later.

47. Mike Brown Earns his Keep – WEC 39: After Mike Brown dethroned Urijah Faber there were a lot of doubters saying he got lucky. After successfully defending his title over one of the WEC’s most feared strikers, Brown proved to everybody he wasn’t a lucky fighter; he was a bona fide superstar.

46. Obvious Fight of the Night – WEC 50: The WEC could have signed over the Fight of the Night check to Scott Jorgensen and Brad Pickett the second they matched the two up. Unfortunately, that’s not how things work and the two had to actually fight. On a card that featured Dominick Cruz vs Joseph Benavidez, Anthony Pettis vs Shane Roller, Danny Castillo vs Dustin Poirier and many others, Jorgensen and Pickett stole the show.

45. Chris Leben vs Mike Swick – WEC 9: One of WEC’s first classic brawls showed the side of Chris Leben the fight fans can’t turn their back on, and the only man game enough to bring it out of him was Mike Swick. Because of its timing it falls under the radar, which is a disservice to Mike Swick, Chris Leben and MMA fans.

44. A Star is Born – WEC 6: Anybody who watched the pre-Zuffa era of WEC is a guaranteed Poppies Martinez fan. It’s impossible not to be. Hometown kid, fought constantly and, oh yeah, this was his debut…

43. All-American Goes Out Swinging – WEC 35: After going 5-0, Brian Stann put on one of the greatest slugfests in WEC history to take the 205-pound belt from Doug Marshall. In his first title defense he picked up right where he left off against Steve Cantwell, and while it was the usual Brian Stann excitement, it was a very unexpected result when Cantwell caught Stann and sent him face first into the mat.

42. Shonie’s Ticket Back to the UFC – WEC 13: Shonie Carter stepped into the WEC cage with more experience than almost anybody to ever do it. The 34-11-7, 1 NC fighter had already lost twice in the WEC and was hellbent to protect himself from a third defeat. Unfortunately for him, Jorge Oliveira came ready to bang. While Carter did lose in one of the most entertaining fights of his career, the performance landed him back in the UFC for one last chance.

41. Out. Cold. – WEC 6: Mike Swick was just starting to get the hang of the whole MMA thing when he took on Kengo Ura, who refused to go away. Ura kept the fight far too interesting through the end of the second round, but when he went for a takedown to open the third round, Swick landed a perfectly timed knee that was so “Quick,” it took a replay for the crowd to fully appreciate it.