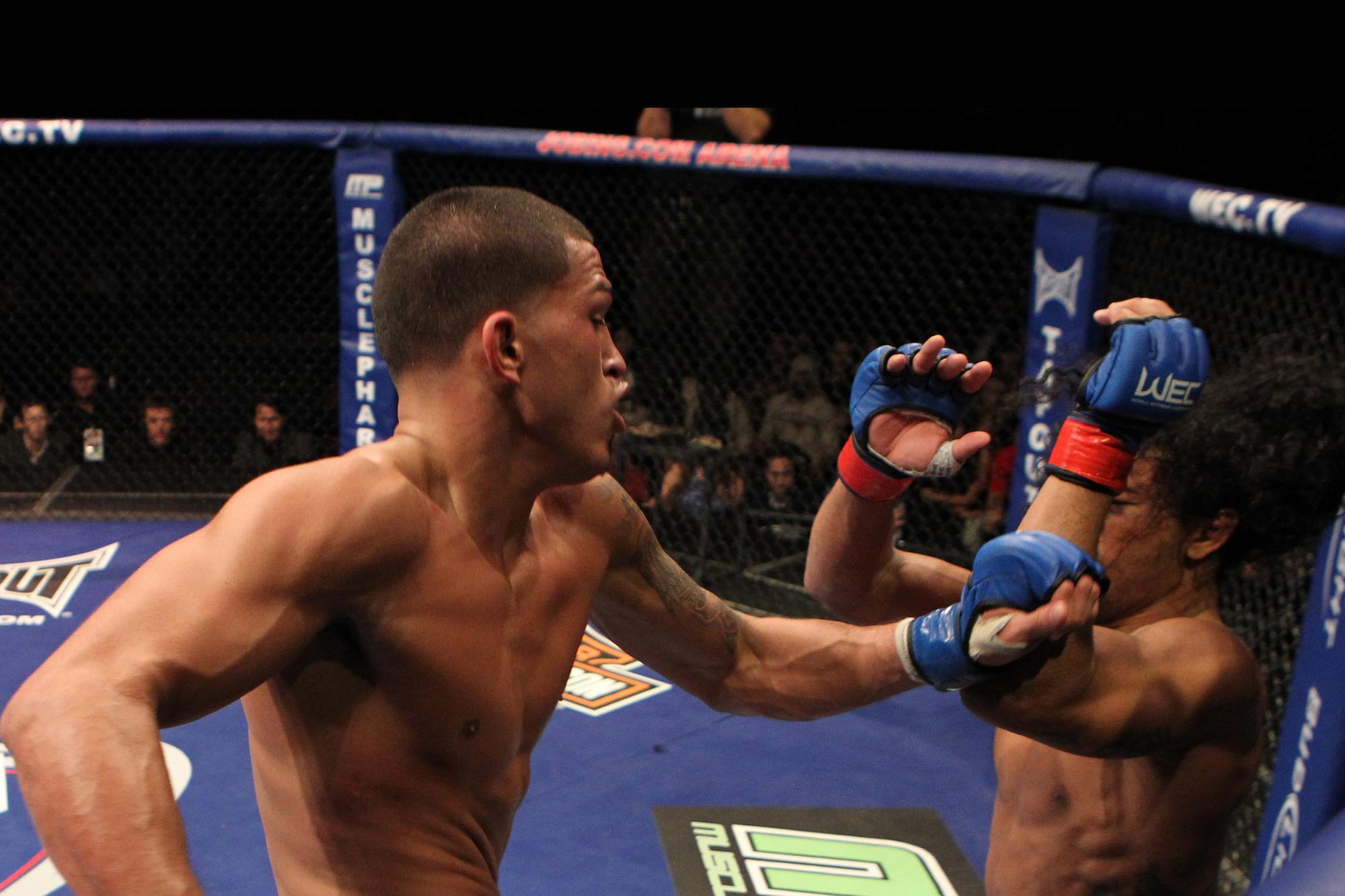 Want to feel old? It’s been ten years since the WEC merged with the UFC and closed the blue cage door for the final time. Producing names such as Anthony Pettis, Cowboy Cerrone, Cub Swanson, Dominick Cruz, Urijah Faber and many more, the WEC had possibly the most concentrated volume of homegrown superstars in the history of MMA.

Zuffa officially purchased the WEC following WEC 24 and there was an overnight change in the production quality and card format, but owners Reed Harris and Scott Adams were putting on some of the most entertaining fights in the world long before their deal with Zuffa. Before Urijah Faber there was Nick Diaz, before Anthony Pettis there was Olaf Alfonso and so on and so on.

With so many high energy superstars there’s got to be at least 100 moments that stand out above the rest, right?

100. Wardrobe Change – WEC 9: Does Deshaun Johnson have anything on Shane Burgos getting his haircut between rounds? No. But in January of 2004 it was a pretty unforgettable sight to see a fighter spend the money to rock Jimi Hendrix shorts to the cage and even more unforgettable to watch him take them off between rounds when things weren’t going according to plan.

99. Justin Levens vs Tony Lopez – WEC 15: It’s not often that an established card has a truly confusing fight. When Justin Levens and Tony Lopez went at it at WEC 15, it left most people watching it wondering, “should I be laughing or applauding?” The decoration of both men’s hair made it even harder to take the bout seriously but it certainly left an impression.

98. BOTCHED – WEC 22: After a relatively decisive, first round loss, the last thing you want to do is look at the ring announcer and tell him, “No. I lost.” But that was the exact position Colley Bradford found himself in after tapping out to a rear-naked choke and watching Trevor Harris perform the Justin Gaethje-patented backflip off the cage only to have the ring announcer declare the winner not once, but twice. It appears this was Bradford’s only MMA bout and it’s fair to say it wasn’t the best night of his life.

97. Clear the Cobwebs, Micah – WEC 35: After suffering a few of the hardest blows of Josh Grispi’s career, Micah Miller weathered the storm only to realize that the fight had been waved off 5-10 seconds before he received the news.

96. Wardrobe Malfunction – WEC 14: What an odd fight. Terry Martin and Homer Moore battled it out until they took turns being out of gas. Desperate times call for desperate measures and when a Homer Moore takedown attempt is met with a Terry Martin sprawl, everybody in attendance could agree, maybe wearing gym shorts to an MMA fight isn’t a good idea. When the fully exposed backside of Martin is pressed against the cage you can see four of the most diligent photographers alive making sure they get plenty of shots. All was worth it, however, as Terry Martin walked out with the win.

95. Blowout Spoils the Blowout – WEC 18: Lavar Johnson was putting on such a clinic against Brian Olsen in the main event of WEC 18 that it might have started to disappoint the fans. To teach them all the true meaning of disappointment, Johnson’s knee gave out just seconds into the second round sending him to the ground and Brian Olsen was declared the winner of a fight he controlled zero seconds of.

94. Pre-Oleinik Ezekiel – WEC 12: In the early moments of the first round, Mark Weir found himself on top of Will Bradford. The two were so inactive the commentary team told the fans to expect a stand-up. Almost as soon as the sentence was finished, Bradford was tapping out from what must have just been the right part of the body in the wrong part of the body. Years removed from the event we see that Weir actually sunk in an Ezekiel choke two years before the MMA Ezekiel King, Aleksei Oleinik, ever recorded one of his own.

93. Throw Out the Rulebook – WEC 17: It’s hard to justify putting a disqualification in a top moment countdown but for the same reason ESPN airs the “Not Top 10” you can’t help but acknowledge one of the most bone-headed decisions in the history of the WEC. After a very stern warning about kicking a downed opponent, Jimmy Dexter allowed Andrew Martinez to stand up, waited a few seconds and repeated his infraction resulting in one of the most obvious disqualifications in WEC history.

92. 11-Straight Self-Inflicted Low Blows – WEC 17: What a rough night WEC 17 was. Fan-favorite Poppies Martinez was well on his way to delivering a typical high-energy performance for the crowd when Robert Breslin landed a kick to the groin. As Martinez was lying on the ground in understandable agony, Breslin showed the fans just how tough…. And weird he was by punching himself “downstairs” eleven straight times to antagonize the crowd that booed him for the low blow. Had a fighter done this in 2020 it would have possibly become the most used GIF of all time.

91. The Leben Effect – WEC 8: Ok, so Chris Leben fought professionally 34 times on record, he was in the TUF House with 15 other fighters, add a few people he’s rubbed the wrong way along the way and you get about 1,000 people who have probably been restrained from unloading on the middleweight fighter. Unfortunately for Brett Sleeman, a referee and commission weren’t going to let him bum rush Leben even after delivering a low blow so clean it would briefly incapacitate him.

90. Greatest Slam Ever – WEC 22: Wrestling expertise was on full display when Joel Thomas landed a slam to Patrick Murphy that was so beautiful it looked like it was straight out of a movie. All that glitters isn’t gold though, as Murphy would go on to take home the W.

89. Granite Ground and Pound – WEC 24: Bottom position was the last place anybody in the middleweight/light heavyweight division wanted to be in when they saw the ground-and-pound Justin Levens dished out to Justin Hawes at WEC 24.

88. Rani Unveils His Arsenal – WEC 42: After going 2-0 in his first WEC bouts, Rani Yahya got sick of guillotines and rear-naked chokes and decided to present the fight world with the first and only north-south choke finish in one of the most grappling-heavy promotions of all-time.

87. Destruction, Terror and Mayhem – WEC 27: You never know what to expect at all when Mayhem Miller is involved. He proved that his unpredictability is just as useful inside the cage when he took Hiromitsu Miura the distance, nearly notching both a banana split as well as a twister.

86. Left Leg Marks the Spot – WEC 14: On paper, Dan Marks was a force to be reckoned with after WEC 14. His first MMA fight was a win via submission to strikes and then he went into the WEC cage and knocked out Mike Alirez with a head kick. The slow-moving kick sort of glanced off Alirez’s head, but when he dropped like a sack of potatoes, the Tachi Palace crowd erupted. In a card that ended with no decisions, Marks’ head kick almost completely stole the show.

85. Pickett’s Peruvian Necktie – WEC 45: In the closing seconds of the second round of Brad Pickett and Kyle Dietz’s prelim bout, Pickett locked in a Peruvian Necktie, forcing Dietz to tap. It was the only Peruvian Necktie in WEC history and even to this day, only a handful have been pulled off in the UFC.

84. Worth the Broken Leg – WEC 1: WEC pioneer Leonard Garcia introduced himself to the world the only way he knew how. Long before his legendary scraps with Roger Huerta, Mike Brown and Korean Zombie, Garcia took the cage at WEC 1, knocking out Victor Estrada with a leg kick that would crack a bone in his leg. It was an injury he wouldn’t discover until hours later on the ride home.

83. Poppies Blows A Gasket – WEC 20: With the exception of possibly Olaf Alfonso, NOBODY had the WEC fans rocking like Poppies Martinez did in the pre-Zuffa era. When Martinez was unable to bounce back from his first loss followed by a low blow-induced NC, Martinez went from writhing in pain to throwing an all-time temper tantrum.

82. The Stockton Zombie – WEC 14: If the Diaz Brothers didn’t tell you all you needed to know about the 209, Patrick Kaase sure picked up whatever they left out. After being rocked what seemed like a dozen times, Kama-Kaase continued to push forward in a very Cheick Kongo-esque manner. Kaase was finally put away by Abraham Baxter, but everybody watching walked away talking about Kaase’s inability to call it quits.

81. First Women’s bout – WEC 9: When Adrienna Jenkins and Keri Scarr clashed at WEC 9 it wasn’t the first women’s MMA bout of all-time, but the January 16, 2004 fight put the WEC nine years ahead of the UFC and nearly three years before Strikeforce broke the gender barrier.