The WEC Lives On Inside the Octagon 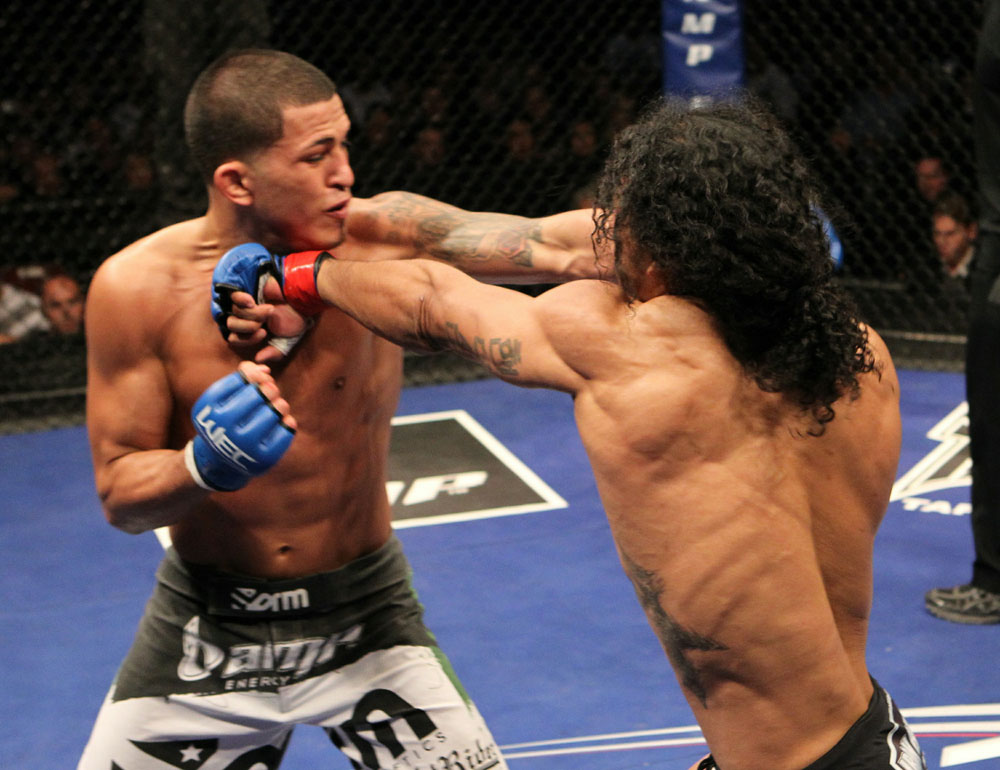 Every time a former member of the World Extreme Cagefighting (WEC) roster competes in the UFC, Twitter lights up with a familiar hashtag: #WECNeverForget.

Over the years, the organization with the blue gloves, blue canvas, and blue cage built a passionate and loyal following with fight fans who fell hard for the non-stop action and excitement a WEC fight card routinely delivered.

Both when it was a fully-stocked company with a complete set of weight classes and even after it was pared down to just lightweight, featherweight, and bantamweight, the WEC was akin to that great little dive bar down the street from your house that had killer eats, a great selection, and turned into the place where you saw a handful of bands before they got big. You brought your friends there when they were in town, and tried to convince a few colleagues that they’d really dig this joint, but you were selective; you didn’t want too many people crowding what felt like your personal slice of awesomeness.

Eventually they shuttered the doors, but not before going out with one last kick-ass night. All the familiar faces were there, plus a few new ones, and you knew that even though your favorite old haunt was no more, you’d still see those regulars, and they’d still be doing outstanding things.

As you would expect, the lighter weight classes are teeming with fighters who cut their teeth in the fondly remembered fight company.

At bantamweight, champion Dominick Cruz, and nine of the top 10-ranked fighters in the division, including interim champion Renan Barao and the man he’ll face next, Eddie Wineland, all competed under the WEC banner. Mike Easton is the only non-WEC alum to crack the divisional top 10.

Just as he did in the WEC, Jose Aldo continues to lord over the featherweight division. Fellow graduates Chad Mendes, Ricardo Lamas, Chan Sung Jung, and Cub Swanson are all in the thick of the title chase, while Dustin Poirier and Erik Koch aren’t too far off either.

But the WEC’s fingerprints can be found outside of the three lightest weight classes in the UFC as well. In fact, at least one fighter in every division between lightweight and light heavyweight competed under the WEC banner at one time or another. While some of the names are obvious, others might have been forgotten.

Here’s a look at the UFC competitors making sure we #NeverForget the WEC.

Benson Henderson: the UFC lightweight champion immediately jumps to mind when talk turns to the WEC competitors enjoying success on the big stage, as “Smooth” was a standout in the organization, winning five consecutive contests to claim the lightweight title before dropping the belt to…

Anthony Pettis: in the final minute of the final fight on the final event in WEC history, Pettis unleashed “The Showtime Kick.” Still one of the single most creative and impressive moves ever utilized, the kick capped Pettis’ championship victory over Henderson, and was a fitting final moment for the organization that always delivered excitement.

Donald “Cowboy” Cerrone: no discussion of former WEC lightweights would be complete without Cerrone, who strapped on the blue gloves 10 times in just over three years. “Cowboy” earned seven wins in the WEC, with two of his losses coming against Henderson, while the other came against his heated rival…

Jamie Varner: before he was a terrific comeback story, Varner was one of the top dogs in the WEC lightweight division. He won the belt from Rob McCullough in his second appearance, defended it against Marcus Hicks, and then again against Cerrone in their controversial encounter at WEC 38.

Danny Castillo: “Last Call” answered the call from the WEC eight times, amassing a 5-3 record while sharing the cage with the likes of Cerrone, Pettis, Dustin Poirier, and Ricardo Lamas.

Anthony Njokuani: “The Assassin” made seven appearances in the WEC. After losing his opening appearance with the company to Henderson, Njokuani rattled off three straight victories over Bart Palaszewski, Muhsin Corbbrey, and Chris Horodecki, collecting Knockout of the Night honors each time.

Johny Hendricks: before he was the #1 contender in the UFC welterweight division, Hendricks was a “wet behind his cauliflower ears” MMA newcomer who notched a pair of victories in the WEC before moving to the Octagon.

Mark Munoz: much like Hendricks, Munoz first caught the attention of fight fans with a pair of wins inside the WEC cage. “The Filipino Wrecking Machine” earned a pair of first-round stoppages as a light heavyweight prior to making the jump to the UFC.

Brian Stann: after beginning his career with a fight in Portland, Oregon, Stann’s next six fights came in the WEC, where he defeated Doug Marshall to claim the light heavyweight title before losing the belt to Steve Cantwell in his final appearance with the company at WEC 35.

Chael Sonnen: Paulo Filho may be on record as the final middleweight champion in WEC history, but that’s only because the Brazilian missed weight for his rematch with Sonnen, turning the bout into a non-title affair. Sonnen earned a unanimous decision win in their rematch, and Filho ended up shipping him the championship belt.

And how could we forget the two men headlining April 13th's TUF 17 finale card in Las Vegas, Urijah Faber and Scott Jorgensen? "The California Kid" was the man who put the WEC and the lighter weight classes on the map in North America, and now the former WEC featherweight boss is chasing glory 10 pounds south at bantamweight, where his buddy "Young Guns" Jorgensen has set up shop for years as one of the best 135-pounders in the game.