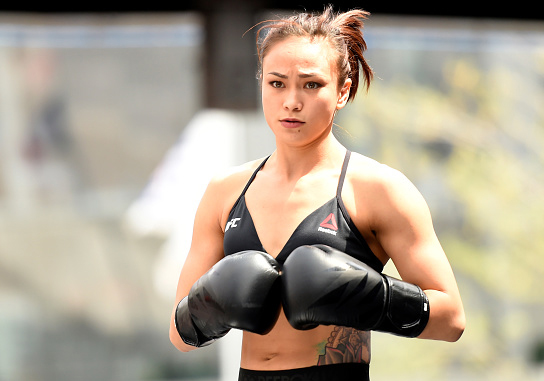 Heading into last year’s UFC on FOX event in Sacramento, California, Michelle Waterson had a point to prove. Sidelined for the previous year, all the momentum she had garnered from her debut third-round submission win the previous summer had dried up and left her as a question mark in the strawweight division heading into her main event clash with Paige VanZant.

Just over three minutes into the opening round, the longtime Jackson-Wink MMA Academy product put VanZant to sleep with a rear-naked choke and put herself front and center in the 115-pound weight class.

The high profile victory brought new opportunities and increased obligations – a spot behind the desk on the next UFC on FOX broadcast, several appearances as a guest fighter and far more media requests were tacked onto her schedule. A bout with Rose Namajunas was added to the mix as well, with many believing the winner would be next in line to challenge for the strawweight title.

Ultimately, that is how things played out. While Namajunas collected the victory and went on to dethrone Joanna Jedrzejczyk at UFC 217, Waterson was forced to regroup and remember lessons learned over her 10-year journey as a mixed martial artist.

“We learn our lessons, we forget about them and then we have to re-learn them, sometimes the hard way,” laughed Waterson, who returns to the Octagon this weekend against Tecia Torres in the opening bout of the UFC 218 main card. “I think we can sometimes overwhelm ourselves with the stress and the pressure of wanting to win, wanting to climb to the top, wanting to get that belt and we lose sight of why we do it in the first place.”
WATCH: WATERSON APPEARS ON STEVE HARVEY'S NEW SHOW

Nearly eight months removed from the loss to Namajunas, the 31-year-old Waterson can freely admit that she walked into that contest carrying additional weight on her shoulders. She felt like she had to win, and while that approach works for some athletes, Waterson isn’t one of them.

“There was a lot of pressure on me after I fought Paige to go for the belt and be in title contention,” she said. “I had just got signed to WME, I was doing all this media for the UFC and I did feel a sense of pressure as far as having to live up to my obligations as a representative of the UFC and trying to be as good on the media side as I was on the fighting side.

“When you say you have to, I feel like you put that pressure on yourself and it’s unnecessary pressure that locks you up and doesn’t allow you to flow,” she added. “It’s just extra weight that you don’t need to be carrying. I think we all go through it and it’s not something that you address until it affects you.”

In the time since her showdown with the new strawweight champion, Waterson has worked to find a balance between her career as a professional fighter, the opportunities that come along with that and the various other titles she holds, including martial artist, wife and mother.

Following the bout with Namajunas, she posed for the latest edition of the ESPN Magazine Body Issue and was part of the cast on the “Champs vs. Stars” installment of the hit MTV reality TV show “The Challenge.” She also moved into a new home and made sure her daughter got her homework done.

“When I first got into fighting, I wasn’t making any money and I didn’t think women would ever be in the UFC, but I continued to do it because it was something that challenged me physically and mentally like nothing ever had. As long as I

keep that at the forefront, training doesn’t become something that is hard to do – I enjoy it and I’m able to really flourish in training camp and in the fight.”

The matchup with Torres is one the longtime American Top Team representative has been chasing for some time. After rebounding from her own defeat at the hands of Namajunas with a victory over Bec Rawlings, Torres called out Waterson by name following her second-round submission win over Juliana Lima back in July, eager to set up a “karate vs. karate” showdown inside the Octagon.

While everyone takes to being called out by an opponent differently, Waterson sees nothing but positives in Torres’ publicly lobbying to face her, though she plans on using their meeting this weekend at UFC 218 in Detroit as an opportunity to show both Torres and everyone else watching that she is much more than just a karate fighter.

“I think that if my name is in people’s mouths, that’s a good thing because it’s putting me out there without me having to do any extra effort,” laughed Waterson when asked about Torres’ callout. “To me, it’s a good thing and it lets me know that I’m on the radar – I’m right there in the Top 10.

“She said karate versus karate, but I’ve been doing MMA for over 10 years now, so my style has evolved into something of my own now and I’m excited to show that off.

“Once you get up fighting the girls that are in the Top 5 in the division, on a stacked card like 218, the biggest thing for me is to go in there, be myself and take advantage of the spotlight. I’ve been in the shadows grinding for the last 10 weeks and I think it’s important for me to let loose and show everybody what I have been working on.”