Waterson knows her time off made her a better fighter

The road to Michelle Waterson’s co-main event against Rose Namajunas has been an interesting one, with everything looking a lot different for “The Karate Hottie” since she debuted in the Octagon in the summer of 2015, picking up a third-round submission win over Angela Magana.

With the strawweight division still in its infancy back then and boasting a stellar reputation built through nearly a decade spent building her name on the regional circuit, Waterson’s victory instantly positioned her as one to watch in the 115-pound ranks. A few months later, she signed to fight Tecia Torres at UFC 194 on December 12 in Las Vegas, but an injury forced her off the year’s final Pay-Per-View card, delaying her sophomore appearance under the UFC banner.
BUY "MEET THE FIGHTER: MICHELLE WATERSON" ON AMAZON!

It would be 371 days before Waterson returned to the cage, but she made up for her year-and-a-half on the sidelines in impressive fashion, rolling into Sacramento and running through hometown darling Paige VanZant in a little over three minutes.

“You know, I have a lot of teammates that have been through it all, the ups and the downs, so I’m able to view them as examples and just make sure that I stay grounded and all that good stuff,” Waterson said when asked about dealing with the frustrations of being sidelined. “You kind of just have to roll with the punches.

“Every fight is different, everybody’s journey is different and I strongly believe that my year-and-a-half off was needed in order for me to be the fighter that I am today. I feel great and we’re just going to build off this momentum and continue to move forward.”
No sooner had she put the finishing touches on her first-round submission win over VanZant did a new opponent present herself, as perennial contender Namajunas took to Twitter, lobbying for an opportunity to share the cage with Waterson.
Get ready for Fight Night Kansas City: Fight card | Cheat Sheet | Waterson on FIGHT PASS' The Exchange |  Fighters on the rise this weekend | Watch Road to the Octagon: Johnson vs Reis, Namajunas vs Waterson, Souza vs Whittaker | Watch free fights: Johnson vs Cejudo | Reis vs Sandoval | Be there! Get your tix here

Given that her main goals for this year are to earn a title shot and ultimately claim the strawweight title, a meeting with the former Ultimate Fighter finalist was a logical step in the right direction and a fight Waterson expected she would have to take at some point in her journey to the top of the 115-pound division.

“I knew I would have to fight her eventually,” she said of facing Namajunas, who enters Saturday’s bout looking to rebound from her split decision loss to Karolina Kowalkiewicz last summer. “The roster’s not that big and I was asking to fight someone in the Top 5 and she was right in that area, so I knew it was going to happen sooner rather than later.” 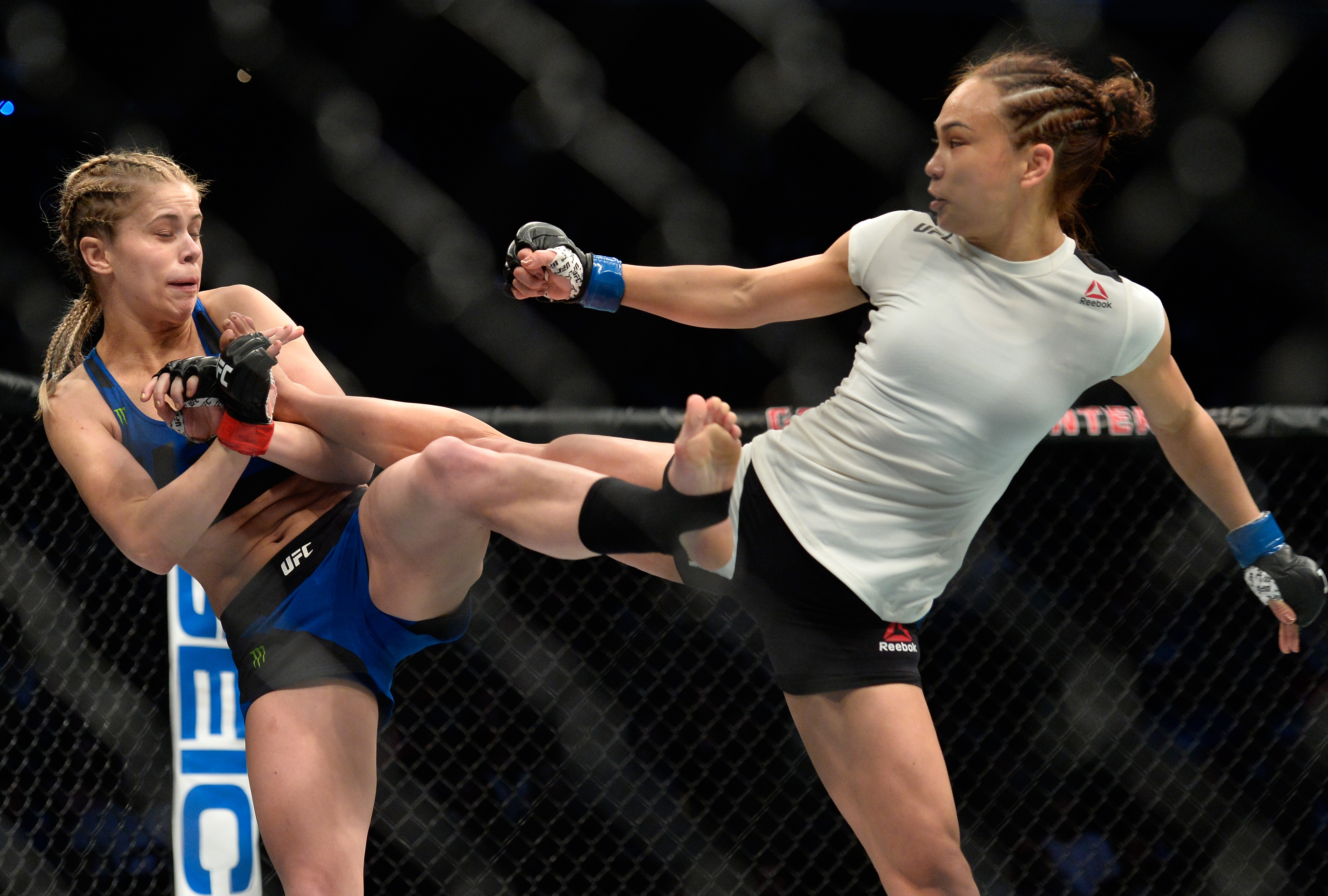 heading into this weekend’s clash with Namajunas, who sits two spots ahead of her in the latest edition of the UFC Fighter Rankings.

After holding court at her own media workout during UFC 208 fight week in New York, she did the same with media at a luncheon earlier this week in Los Angeles and has been featured on both People and espnW. She has become the newest “It Girl” in the Octagon over the last several months, but has no intentions of letting that unofficial title that carries added pressure derail her plans for 2017.

“If I let it, I think it would because there is a lot going on,” she said of the pressure that comes with being in the public eye in advance of her fight. “But it doesn’t change the fact that I’m fighting Rose on Saturday and it doesn’t change the fact that at the end of the day, it’s just her and me inside the Octagon. I know that I’m 100 percent prepared, I feel great, my weight is on point and I wasn’t injured from my last fight. Those are the things that matter to me the most.”

She also isn’t going to let the abundance of questions about her championship aspirations and current titleholder Joanna Jedrzejczyk cloud her focus either.

As much as sharing the cage with the Polish standout and being the one to dethrone her are items on her 2017 “to do” list, Waterson knows the first step to making those things happen is getting through Namajunas this weekend in Kansas City.

“Rose is a completely different fighter than Joanna is – the only similarity might be somewhat that both of them are rangy fighters – so there is no point in me trying to focus on Joanna,” she said. “I have a task ahead of me and if I don’t get past that task, I can’t get to the top of the mountain, so my goal at this point is focusing on Rose and she’s not somebody to look past by any means. I know I have my hands full with her.”

Besides, turning in another standout effort on Saturday could potentially put her in line for a title shot later this year, which would allow her to cross off one of the goals she set for herself heading into the 2017 campaign, and that’s what this is all about for Waterson.

That, and becoming a ninja.

“We put in so much hard work at the gym that nobody gets to see – 8-10 weeks of hard training, three or four training sessions a day with no rest, not being able to go home and crack a beer and get away from the training sessions

“It’s all a build-up and it’s not just the 8-10 weeks that I was training for this fight, but it’s the 10 years that I’ve been fighting professionally, the 20 years that I’ve been doing martial arts, my entire life of hoping and wishing that I could one day be a ninja. That’s what we all wish for is to be able to accomplish our goals and check those boxes off our checklist.”