It doesn’t matter that she’s heading into enemy territory to face Sacramento’s Paige VanZant in Sactown in the UFC on FOX main event. She’s got those butterflies in her stomach and that doesn’t just mean that she’s ready for battle, but it’s what she’s missed the most while dealing with injuries that have kept her sidelined since July 2015.

"I missed this feeling that I’m going through right now of the nerves and trying to contain my emotions when it comes to thinking about the fight and knowing that it’s right around the corner,” she said last week. “It’s kind of a surreal experience.”

It’s one she’s been through 17 times as a professional mixed martial artist, and every time, those nerves have served her well when it was time to fight. She hasn’t won every fight, but winning isn’t always what determines success as a martial artist. That was a lesson that hit home during her 17-month layoff, one that saw fights with Tecia Torres and Aisling Daly fall by the wayside due to knee and hand injuries.

“It’s been so long since I’ve fought, but it’s not that I wasn’t getting ready for a fight,” she said. “I actually had two fights scheduled, so I was in fight camp and going through the motions, and dieting and training hard every day and stuff like that. And even when I broke my hand two weeks out from my last fight when I was getting ready to go to Germany, I just told myself that there’s no point in stopping my momentum, and I knew if I continued on with my momentum that there was only way that I could go, which was up.”

Along the way, she realized that her journey isn’t about one fight. 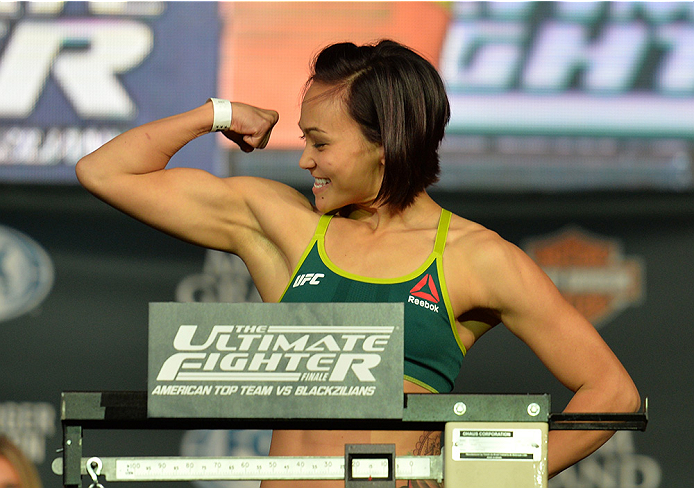 “The reason why I do martial arts is because I want to grow and develop and evolve as a martial artist and as a person,” she said. “And making it a daily habit and a daily routine is what you have to do in order to understand that it’s more of a lifestyle than it is just getting ready for a camp.”

That doesn’t mean Waterson isn’t concerned about the bottom line, because she is. In this business, if you’re going to put it all on the line in the Octagon, you better want to win and you better be aiming for the skies. Waterson, 30, is a former Invicta FC champion at 105 pounds. In the UFC’s strawweight division, she’s currently ranked 12th in the world after winning her first bout against Angela Magana, and she’s coming for more.

“There has to be a finish line because you put in all this hard work and you never get to test yourself and your skills and abilities, and that’s why we have competition,” she said. “Then you can see what all those long days you put in were for because you actually get to put it into action. So I think it’s important to have these competitions and these finalized dates because it gives us a reason to compete. But once you’ve competed and you do hit that finish line and you come up victorious or you don’t, you learn from it and you try to climb a bigger mountain. And you continue to grow and continue to climb different mountains and you notch those off on your belt.”

Waterson is human like the rest of us, though, eager to spend time with her family and just relax when she’s not putting in long hours at the Jackson-Wink MMA gym in Albuquerque. 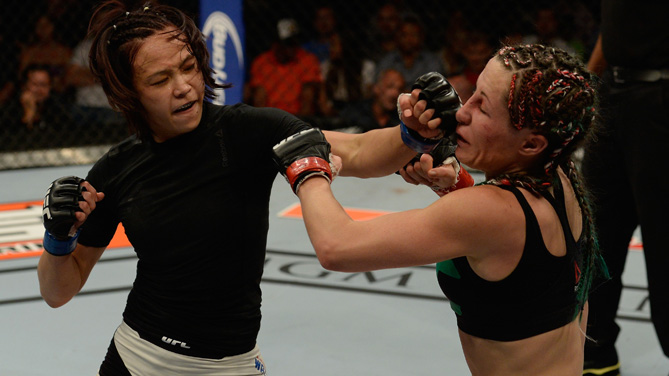 gym,” she laughs. “I want to lounge and drink hot cocoa and watch Netflix and eat pizza.”

At times like these, it pays to have a friend in the business, and Waterson has that in former UFC women’s bantamweight champion Holly Holm.

“She’s been the biggest influence as far as having a female fighter to look up to,” Waterson said of Holm. “She is such a great example of what a champion should be, and not only a champion, but a person in general. She is the most genuine person you’ll ever meet and she’s very heartfelt with everything she does, in and outside the cage or the ring. She leads by example, and I really admire that about her because she’s never trying to judge me or critique me or anything like that, but she comes in the gym and works hard every day, whether she’s in camp or not, injured or not. And when I see her doing that, it makes me want to push harder to become the best that I can be, so when I’m feeling unmotivated, I just think, ‘What would Holly do?’ And then I get up and go run.”

Waterson laughs, and while she admits that those “good” nerves are here, she’s not worried about the fight with VanZant. She’s been down this road before, and has even been the one with the black hat on fight night. No problem, says “The Karate Hottie.”

“I have fought in enemy territory before,” she said. “It’s been a long time but I’ve been fighting for so long that, to me, a fight’s a fight, and it doesn’t matter where it’s at. If it’s in my backyard or under the lights with millions of people watching, it’s her and I in the cage, and when the door closes, there’s nobody else that can affect the outcome except for me.”