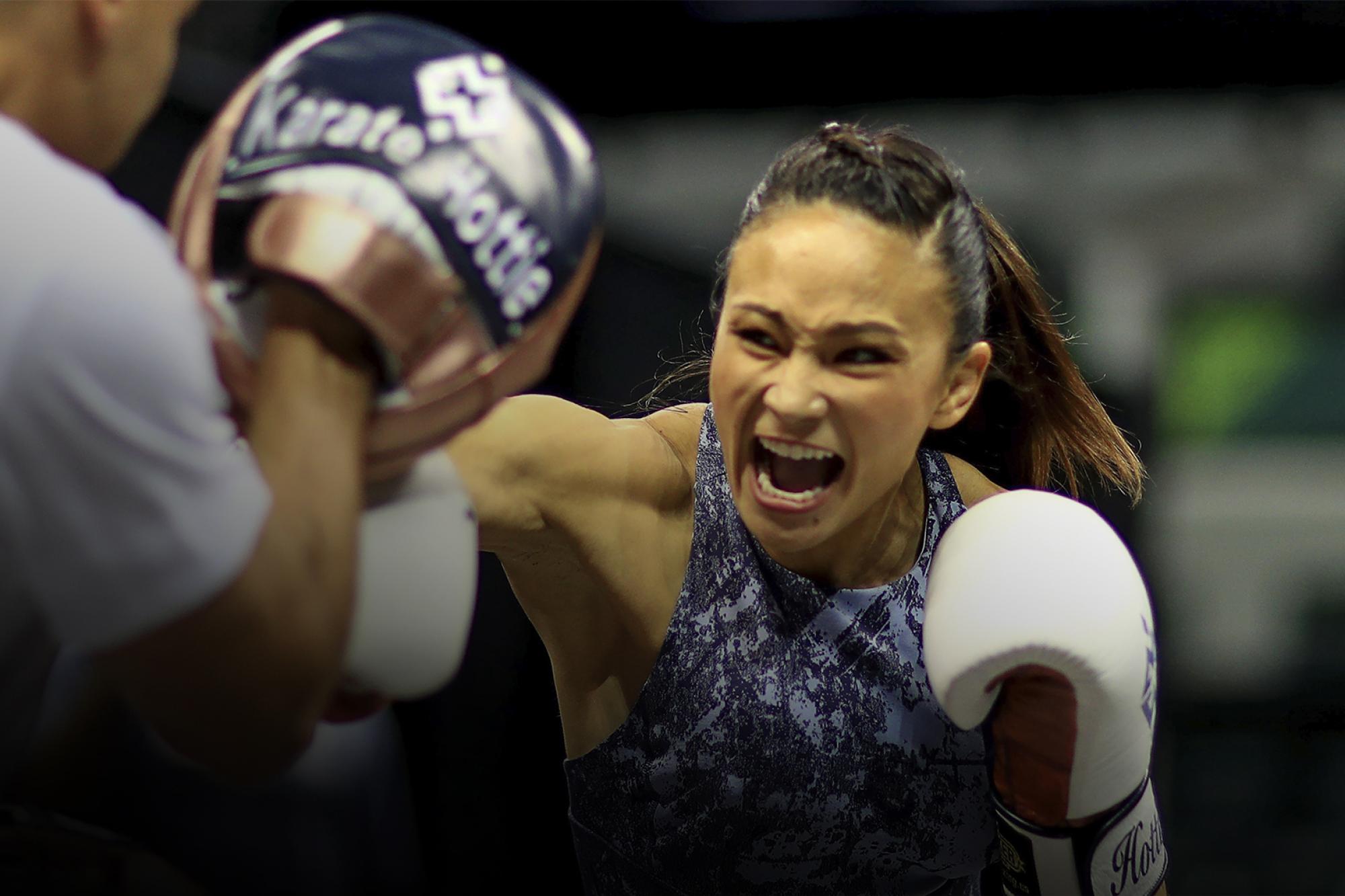 “I feel like I’ve reached a point in my life where I’ve allowed myself to embrace my greatness."
By E. Spencer Kyte, on Twitter @SpencerKyte • Oct. 10, 2019

Michelle Waterson stood in the center of the Octagon, taking a second to compose herself as Jon Anik began their post-fight interview.

Moments earlier, Bruce Buffer made official what everyone in Philadelphia and watching at home already knew: that Waterson had dominated all three rounds of her crucial clash against former title challenger and perennial contender Karolina Kowalkiewicz, simultaneously earning the biggest victory of her career and putting herself in the thick of the title chase in the strawweight division.

When Anik ended their conversation with his patented inquiry about who the veteran contender would like to face next, Waterson cooly and calmly delivered her message:

While she wouldn’t get the title shot she desired, that simple little moment — the one finished with a sly smile and an embrace of her daughter Araya — has proven to be a pivotal one for Waterson, who returns to action this weekend in a main event showdown against former titleholder Joanna Jedrzejczyk at Amalie Arena in Tampa.

“I feel like I’ve reached a point in my life where I’ve allowed myself to embrace my greatness,” said Waterson, who enters Saturday’s fight card on the best run of her career, having earned three straight victories. “I have now embraced that Mom Champ mentality, but it has taken some time for me to be able to do that.

“One key moment is just verbally saying, ‘I want to be champ,’ and not just saying it to myself in the mirror in the bathroom when nobody is around — but saying it on the mic with millions of people watching,” laughed the 33-year-old, who comes from a traditional martial arts and military background and therefore isn’t as naturally comfortable taking her ambitions public and declaring them with the force of some of her more vocal, more unabashed contemporaries. “Another one was midway through my last camp, realizing that there is a difference between wanting something and deciding you’ve got to have it.

“When you want something, your body and your mind have a different reaction to it. It’s kind of like, ‘Oh, that would be nice’ and it’s like a dream or something that’s far away. ‘I really want that ice cream. I really want to be a millionaire.’ But wanting to be champion is different from, ‘I’m going to be champion regardless of what it takes. I’m going to put in the work and there is nothing that is going to stand in my way.’

“But the biggest thing I’ve come to a realization about is that all the champions knew they were champs before they became champs,” she added. “Everybody that has greatness in them has a very deep-seated confidence inside of them, regardless of any titles being given to them, so I’ve really just embraced my greatness and embraced the fact that I’m a warrior, through and through, and when push comes to shove, I’m going to fight.

“I know that in my heart and all I have to do is go out there and show that to the world.”

A great deal has changed in the division since Waterson stood triumphant in the Octagon in Philadelphia.

Six weeks after she defeated Kowalkiewicz, the title changed hands in Rio de Janeiro, Brazil, with powerhouse challenger Jessica Andrade slamming her way to victory over defending champ Rose Namajunas in the main event of UFC 237. However, Andrade’s reign wouldn’t last long, as the Brazilian dynamo happily went on the road to defend her title for the first time, venturing to Shenzhen, China where she ran into the emerging force of nature that is Zhang Weili, who needed just 42 seconds to wrest the belt away from Andrade.

After Andrade unseated Namajunas and the MMA world began speculating about who should be the first to challenge the new champion, Waterson’s name was quickly put forward, with many believing her mix of recent results, veteran standing and marketability made her the best candidate for the job.

Unfortunately for Waterson, that didn’t happen, but while she was initially disappointed, the streaking contender has moved on to find a silver lining in being passed over and having the opportunity to share the cage with the longest reigning champion in the division’s history.

“I was a little hurt about the whole situation, but those weren’t the cards I was dealt and I had to deal with it,” she said. “I’m a firm believer that things happen for a reason and I’m very stoked about this fight.

“I believe this fight against Joanna is a championship fight. Joanna was the longest reigning champion in the strawweight division — longer than Rose, longer than Andrade, longer than Weili — and so, to me, it’s a huge honor to be able to fight her and showcase my skills against one of the best in the world.”

While the timing wasn’t right for Waterson to secure a title shot in the summer, she believes she’s landed this bout with Jedrzejczyk at the perfect time.

Once considered the most dominant female champion in the sport, the days of opponents being psyched out before stepping into the cage with the 32-year-old Polish standout have passed. After running off 14 straight victories to begin her career, including her championship victory over Carla Esparza and five consecutive successful title defences, Jedrzejczyk enters this weekend’s headlining bout with just a single victory in her last four trips into the Octagon.

Previously viewed as unbeatable, many now wonder if Jedrzejczyk is capable of recapturing her past form, though Waterson expects nothing but the best from the former titleholder when they meet on Saturday night.

“I’m not looking past Joanna at all,” she said, making it clear that she still knows she’s facing an elite talent this weekend in Tampa. “I’m really looking forward to a sharper, hungry Joanna who is looking to get back into the win column. Her losses aren’t against nobodies — they’re against champions — and that just adds to her resume.

“With that being said, I’m going into this fight with complete confidence because I know that I have what it takes to beat her. I am a complete martial artist. I don’t just love standup — I love the ground, I love wrestling, I love standup, the jiu-jitsu, the cage work and blending it all together. I’m going to take this fight wherever I need to go in order for me to win.”

And if that comes to pass, Waterson believes there is no question what should come next.

“I believe in myself and my skills and I will be victorious,” she said, “and after this fight, there will be no question that I deserve a title shot.”