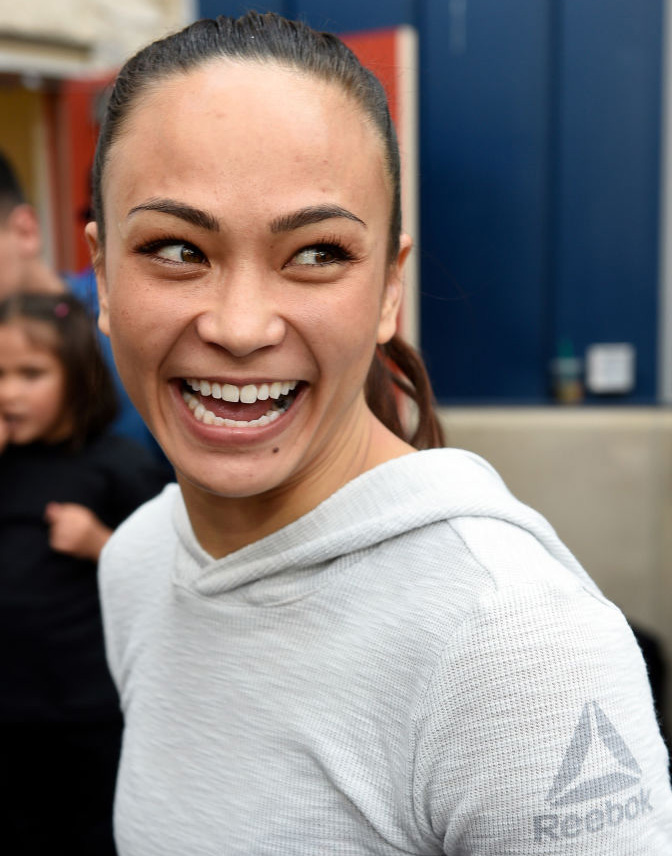 Michelle Waterson has looked to lessons she tries to impart to her daughter Araya in order to help her right the ship amidst the first two-fight losing streak of her career.

After closing out 2016 with a bang by choking out Paige VanZant on network television, the 32-year-old veteran returned to FOX last April and was stopped by Rose Namajunas. Eight months later, she stepped into the Octagon opposite Tecia Torres at UFC 218, and following 15 hard-fought minutes of action, the former Invicta FC champion found herself on the wrong side of a unanimous decision result.

“I have a bad habit of punishing myself too much,” admitted Waterson, who will compete on FOX for a third straight time when she steps into the Octagon opposite Cortney Casey on Saturday night in Glendale, Arizona. “When you do that, it only drags you down. You can only punish yourself for so long until it becomes more of a problem than trying to fix the actual problem.

“It’s like what I tell my daughter all the time when she cries if she doesn’t get her way or if something is going wrong or she drops something: ‘Does crying solve the problem?’ No, it doesn’t. It might make you feel better at the time, but it doesn’t solve the problem. So cry, get your feelings out of the way and figure out the problem.”

In sitting down with her team to parse what went wrong and what changes she can make following a frustrating 2017 campaign, one of the main target areas Waterson has focused in on is the way she prepares for her fights mentally.

A pro for more than a decade, the 20-fight veteran has the requisite physical skills and abilities needed to navigate training camp and step into the cage and compete on Fight Night, but like most UFC competitors, Waterson isn’t just a fighter.

She’s also a mother, a wife, a daughter and a friend, among many other things, and while she is committed to her career and prioritizes winning and being as prepared as possible heading into each bout, life can’t just get put on hold because there is a fight on the horizon.

For the last several months, Waterson has been working on finding ways to help handle the unexpected twists and turns that life introduces on the road to the Octagon.

RELATED: Waterson vs Casey - Road to the Octagon

“I think being a mom and a wife and a fighter, I can sometimes allow myself to become too much of a multitasker and allow my mind to be in 10 places at once,” said the longtime Jackson-Wink MMA representative. “It’s okay because I’m still getting stuff done, but if you want to be an elite fighter and you want to compete against elite fighters, you can’t allow that to happen, so training my mind to hone in on the present is something I’ve really been working on this camp.

“In my last fight camp, my husband and I were getting ready to move into a new house and my father-in-law got in a really bad car accident and was hospitalized for a long time and is still working on his physical therapy,” continued Waterson. “We had to take in my husband’s little brother, who is 12, right at the beginning of my fight camp and those are things you do regardless because that’s family and it’s not something you can just shut off until after fight camp. That’s life and life happens and you have to learn to deal with it.”

One of the biggest changes for Waterson leading into her matchup with Casey has been her approach to dealing with the pressure that comes with every fight.

Heading into her bout with Namajunas last April, the charismatic contender admitted that she felt pressure to follow-up her finish of VanZant with another strong showing in order to propel herself into a title fight in the second half of 2017.

When things didn’t go her way against “Thug Rose,” she entered the Octagon at UFC 218 with the strong desire to avoid losing back-to-back fights front and center in her mind and believes it had an impact on her performance that night in Detroit.

“The pressure is going to be there regardless,” said Waterson. “You can’t get away from it and I feel like not wanting to lose two in a row against Tecia, I let the pressure get to me. When you do that, it can stifle your creativity and stifle your energy and not allow you to perform the way that you want to perform.

“So instead of not allowing the pressure to get to me, I embrace it and I feel it. It’s like when you get butterflies in your stomach – they’re going to be there regardless because that’s your fight or flight instinct, but the question is can you get those butterflies to fly together in sync?”

Despite her recent struggles and the ever-present challenges that come with forging a career inside the UFC cage, the lifelong martial artist has managed to maintain a philosophical approach to everything and remains excited to return to the Octagon and put everything she’s been working on into practice on Saturday night.

“It’s just kind of been an acceptance of my journey,” said Waterson. “Martial arts is ‘the art of war’ and you’re not going to win every battle, but, for me, it’s a learning process and I learned so much about myself in my last fight with Tecia.

“It was a really close fight and the reason why I fight is because it teaches me things about myself that I wouldn’t have otherwise found out.

“I still love the process and I want to go out there and perform because that’s what I love to do and I’m really looking forward to getting back into the cage.”