Ware prepares to fight anyone, anywhere 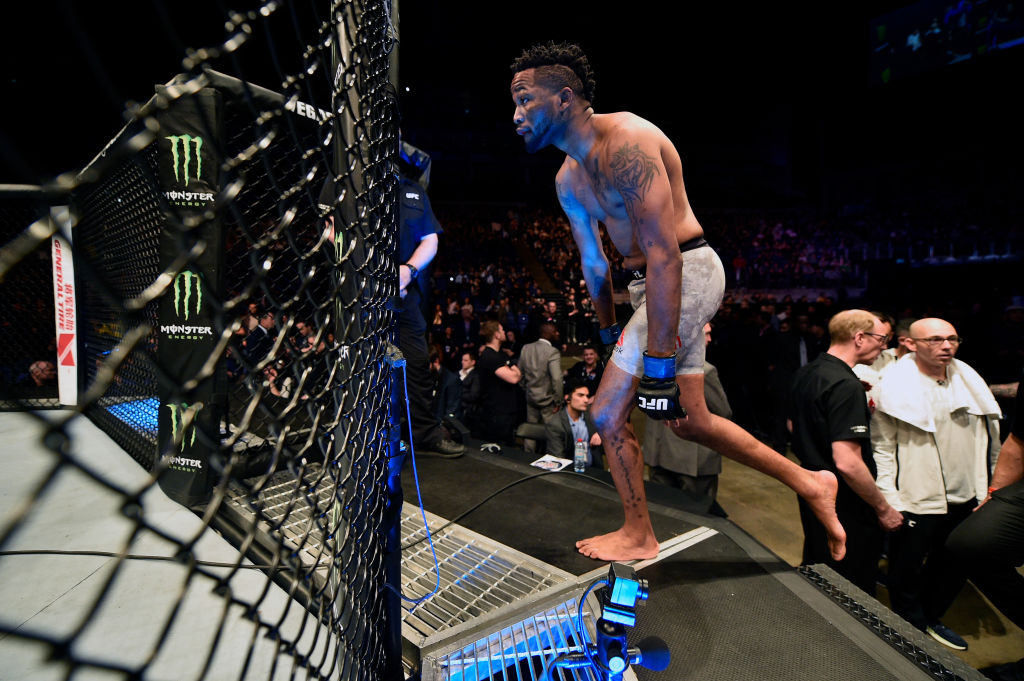 There had to be a temptation for Terrion Ware to go all Rocky IV for his upcoming bout against Georgia’s Merab Dvalishvili. Leave early for Moscow, train there, and approach the bout as the American fighting against the odds in Russia.

“My wife wasn’t gonna let me,” Terrion said. “She’s not as forgiving as Adrian.”

Well, maybe it was for the best, considering that Adrian Balboa also told Rocky that he couldn’t win against Ivan Drago in the iconic film series.

“She’s definitely more supportive than that,” he laughs.

So who does take a three-fight losing streak to Moscow with no hesitation?

“The craziest dude in LA you can find,” said Ware, who hopes to reverse his fortunes this Saturday, and he’s unconcerned with who he’s fighting or where.

“I do not care who I fight or where I fight them,” he said. “I believe I can beat anybody in the world on any given night. I train that way, I prepare everything that way, so I’m not afraid to fight anyone anywhere.”

The Californian has backed up that talk with action, with his first three UFC opponents – Cody Stamann, Sean O’Malley and Tom Duquesnoy – representing a top 15 bantamweight contender and two top prospects. And even though Ware was in all three fights, he did lose a trio of decisions, putting him in a tough spot heading into bout number four, a place made tougher knowing that many felt that he deserved the nod against Duquesnoy in March.

“It definitely hasn’t gotten any easier,” said Ware. “I’m sure if you ask a hundred fighters, a hundred fighters will tell you that when it comes to the judging, they cringe. They never know what’s gonna happen and they’ve seen it way too many times. Every sport has its problems. In our sport, it’s judging, and we have more than a few judges that are probably not qualified to be judging fights. A lot of these guys come from boxing, and I love boxing, but MMA and boxing are two different things.”

Yet like boxing, once the verdict is rendered, it’s law, meaning all the 32-year-old can do is move forward. And he’s done just that.

“I can do one of two things,” he said. “I can sit here and complain and go, ‘Oh, woe is me,’ or I can just get back in the gym, train harder and work on finishing people or dominating the fight so much so that there’s no way they can give the fight to the guy. Other than that, I can’t let judging dictate how I live my life and how I train and how I approach fighting and my fight. I’ve got to fight my fight and continue to do that and hope for the best.”

At the very least, Ware has proven to be a fighter to watch at 135 pounds and one that just needs some good fortune to go his way. It’s the same situation Dvalishvili is in after losing his first two UFC bouts, setting the stage for what should be an exciting start to the UFC’s first event in Russia. And though Ware is looking forward to seeing the sights and being a part of history, but not until after he gets his hand raised.

“I’m going over there to take care of business,” said “Flash,” who hopes that this Saturday’s bout is only the start of making history in the Octagon.

“Everybody’s first couple fights in the UFC, regardless of how confident they may show on the exterior, if you really break it down to the core, they’ll tell you that they’re still trying to figure out what their worth is, what their value is, how good they are and can they compete at that level,” Ware explains. “And in my first year, fighting really tough guys, I think I’ve answered that question to myself that I do belong here and I can compete here against some of the best guys in the world. That’s the positive I’ve taken out of it. 0-3 is not the way I would have liked to start my UFC career or how I’ve envisioned it, but it’s my reality right now, and the way I look at it is, I have the chance to do something that no one has ever done, and that’s start my UFC career 0-3 and go on to win a title. That’s my mindset and my goal – to get on a win streak and work my way up the rankings and eventually get a title shot and win that title.”