"I am very excited. I love fighting with different opponents and I can feel the joy when it happens." - Wang Sai 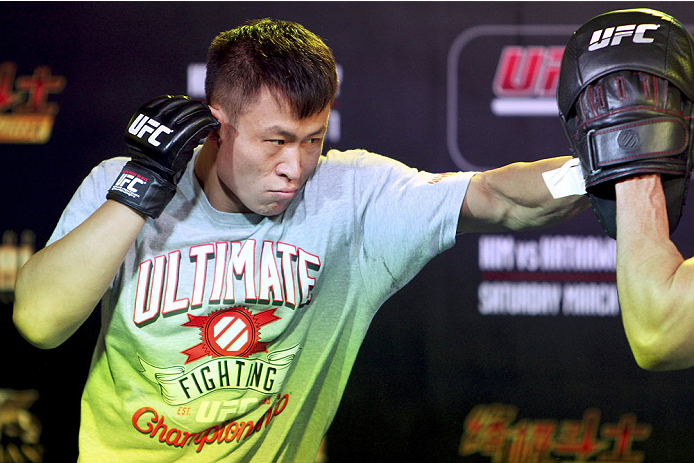 The Ultimate Fighter China is over for Wang Sai. He didn’t win the series in his final bout against Zhang Lipeng in March, but he will be back in the Octagon this Saturday to face England’s Danny Mitchell on the UFC Fight Night card in Macao.

This should be the scary part. 7-5-1 as a pro mixed martial artist, Wang will likely be facing fighters night in and night out who have more world-class level experience than he’s seen in his run in the sport, and that could be pretty intimidating.

Not for Wang though.

“I am very excited,” he said. “I love fighting with different opponents and I can feel the joy when it happens. So I will do every competition well to add to my experience and enjoy it.”

That’s the difference between folks like Wang and the rest of us. They embrace the idea that this isn’t easy, that every fight is another challenge. And despite his lack of fights at the top level at the game, the tenacious 28-year-old southpaw showed in his split decision loss to Zhang that, at the very least, he’s got the heart to compete here. As for the rest, let’s just say that there were plenty of people who thought Wang had done enough to win that fight, including the fighter himself.

“I accept the decision, but I think I didn't lose the fight,” Wang said. “Zhang used a lot of rubber guard to control me, but he didn't have a next step. Zhang is good, but he has to learn how to defend punches and elbows. If there is a second fight, I will not leave the result to the judges.”

When Wang is on, he doesn’t get the judges involved, as he’s finished all seven of his pro wins, four by knockout and three by submission. His attitude is a simple one – to get his opponent out of there as soon as possible. It’s something he describes as “deadly important,” citing Mike Swick, Lyoto Machida, and Fedor Emelianenko as his influences in this regard.

It’s not a bad group when it comes to fighters to look up to, and as a bonus for Wang, he even gets to work with one of the aforementioned trio, as Mike Swick remains his lead coach for this fight with Mitchell.

“Mike is good and he’s a pro,” Wang said. “Mike teaches a lot of technique and has a lot of experience in MMA and the UFC. The most important thing I have learned is that a fighter should be trained with a specific target.”

This week, that target is Doncaster’s “Cheesecake Assassin,” who has won 14 of 20 pro bouts, but is looking for his first Octagon win after losing his debut to Igor Araujo in March.

“He is good at BJJ and throws,” Wang said of Mitchell. “He finished a lot of opponents on the ground before. My BJJ is not as good as his, so if I am forced to the ground, I have to do my best to defend.”

It’s an honest assessment of where he’s at currently, but at the same time, you get the impression that as his game evolves and his experience level grows, he’ll be just fine in the line of fire that only the UFC can provide. And he’s looking forward to it.

“I have learned a lot,” he said. “Everyone is a pro here and I am eager for my real first fight in the UFC. Everything is good.”