"I’m proud because I’ve fought the best guys and I’ve done good, and I have a lot to give to this sport in the future." - Wanderlei Silva 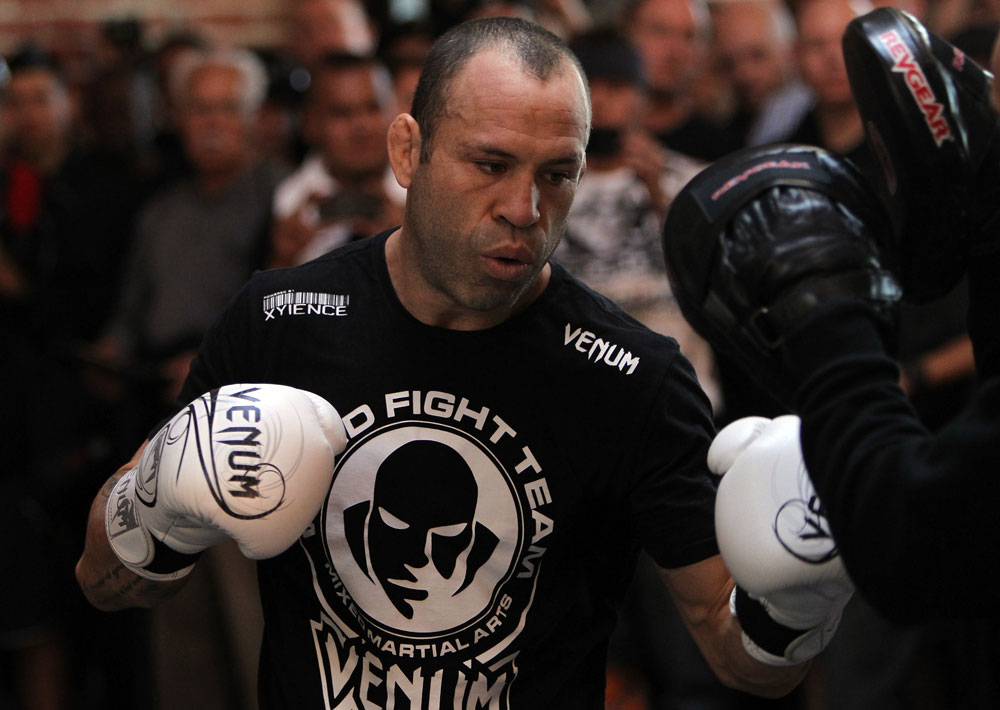 He has lost six of his past eight fights, yet fans still go nuts whenever they see Wanderlei Silva at the neighborhood grocery store, at his Las Vegas gym, or posing for pictures at a UFC Fan Expo. The mounting accumulation of L’s on Silva’s record are still dwarfed by his 22 highlight reel knockouts and an extraordinary unbeaten streak that once spanned 18 fights against top-shelf competition. As much as ever, the ultra-aggressive Brazilian is widely revered for the fearlessness and ferocity that define his style, which has made him one of the best in the business at making “stadiums shake” (a goal of his). But after 15 years in the fight game, and a 27-second knockout loss to Chris Leben, retirement whispers have begun to swirl around the 35-year-old MMA icon. A growing chorus of fans and reporters are wondering: “How much longer should Wanderlei Silva fight?”

Silva’s performance against Cung Le (7-1) in the UFC 139 co-main event could go a long way toward answering that question. Cung Le, a San Shou master whom Silva called “the best kicker in MMA,” lives in San Jose, California, and has a huge following in the San Francisco bay area. Silva will have to beat Le in his backyard, but doesn’t seem the least bit fazed by the home field disadvantage, asserting, “I’m going to make his fans cheer for me.”

I interviewed Wandy a week before the showdown and he sounded as upbeat and positive as ever while candidly addressing a host of topics including A) potential retirement; B) whether he intends to become a more defensive and cautious fighter; C) how being a terrible soccer player led him to MMA; D) why he wants to fight in Japan and Brazil “one more time” and E) the best advice he can offer to young fighters.

Here are the unedited excerpts of that poignant and revealing interview with one of the sport’s most beloved figures:

UFC: You’re known as an ultra-aggressive fighter. Have you ever thought about becoming a little more patient inside the cage or is that just simply impossible?

Wanderlei: It’s true, after my last fight I need to change my game a little bit because this sport is changing a lot. I don’t have more space for (a) fall. I’ve trained a lot on my defense and for attacking in the right moment. I’m going to try and hold my instincts. Because sometimes my opponents touch me and I want to kill them. I need to wait a little bit more. I’m going to try. I pray a lot and I ask for God to give me the strength to help make me calm and allow me to execute my coaches’ gameplan.

Wanderlei: Whichever one trains more! It’s an interesting moment for me right now. I’ve had a lot of changes in the past few years. When I moved to the UFC I changed my life and I’ve been adapting since. Right now I have a gym and we have 40 amateurs and 15 pros. I’m training with these guys. Right now I’m back to the normal things in my life.

UFC: Did the loss to Leben make you think about retirement?

Wanderlei: No, I didn’t think about that. I felt sad because I trained a lot for that fight. It was like an accident, no? It happens. Sometimes I have bad days, but on the bad days my fans make me feel good.

UFC: You’ve defeated so many elite fighters and thrilled millions of fans. What is your proudest moment in this sport?

UFC: When adoring strangers walk up to you and mention a fight, what fight do they bring up the most?

Wanderlei: I think my two victories against Rampage. I think my second knockout over him is one of my best victories, no?

UFC: You and Vitor Belfort both live and train in Las Vegas. You’re both Brazilian legends. And so many fans still talk about the first fight between you guys. What are your thoughts on a rematch with Vitor Belfort?

Wanderlei: He’s a good guy but of course I’d like to fight again with him. That fight needs to happen.

UFC: How much longer would you like to fight?

Wanderlei: It depends how long my body allows me. But I do want to fight in Japan and Brazil before I retire.

Wanderlei: I made my (career) in Japan and I had the best times of my life there. I’ve had a lot of fun and I need to give one more fight there. Brazil is my hometown so I want one more there, too.

UFC: You get to pick your opponents for Japan and Brazil? Who are you picking!?

UFC: Let’s turn to Saturday night’s fight with Cung Le. What are your impressions of him as a fighter?

Wanderlei: Before I knew nothing about him, but after the fight was made I studied his game and he’s a really good fighter. I haven’t seen anyone fight like him. I need to adapt my style for him. But I’m ready for the fight.

UFC: You run a gym in Las Vegas. What’s the best advice you can give to a young fighter for their careers? Not technique-wise, but career advice?

Wanderlei: I tell the guys in my gym … I have 16 years in this sport and I wish I could just be starting my career right now. Because, man, this sport is changing so much. The last event (UFC on FOX), going to the biggest channel in Brazil (Globo) … everybody is talking about it in Brazil, everybody! It’s unbelievable how big this sport is right now.

UFC: What did you feel when you saw Junior dos Santos knock Cain Velasquez down with that booming overhand right?

Wanderlei: He made everybody here jump out of our seats! He’s a humble guy who came from a simple family. Man, that was a really important event for us in Brazil because it was on the biggest channel in Brazil. That would be a dream for all MMA fighters. So that victory has opened a lot of doors for fighters in Brazil.

UFC: MMA is growing like a wildfire in your home country, which is really the motherland of the sport. Soccer (“football” everywhere else in the world) is huge in Brazil and they always field one of the world’s best teams. Are you a big fan of soccer?

Wanderlei: I watch soccer but I’m not a fanatic for it .A long time ago I wanted to play, but every time the guys chose their teams I was one of the last guys. The guys knew I didn’t play very well. I played very bad, man. After that I started to fight.