"This country gives me a good energy, the fans here are great, and I’m
so happy to be back in the country that has given me the best moments of
my life." - Wanderlei Silva 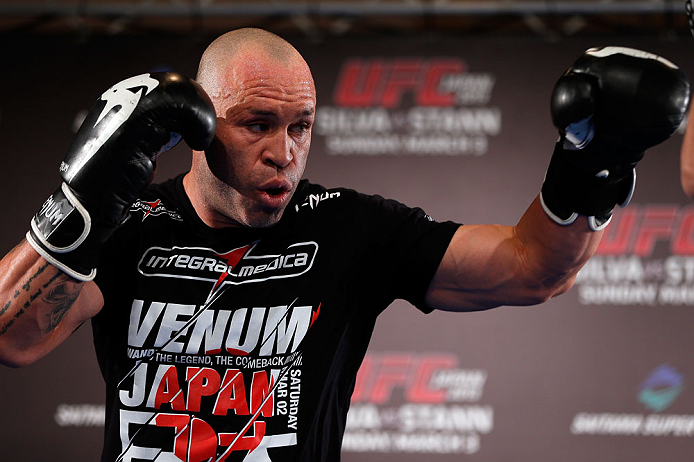 There is nothing like seeing (and hearing) a fighter cheered on in his home arena. Georges St-Pierre in Canada, Anderson Silva in Brazil, Wanderlei Silva in Japan.

Yes, despite being a native of Curitiba, Brazil, Silva’s second home, and most likely his first fighting home, will always be in the Land of the Rising Sun, the place where he fought 28 of his 48 professional fights. It’s a unique relationship to say the least, the reserved fans of Japan and the emotional “Axe Murderer,” but it’s one that Silva has always cherished.

“This country gives me a good energy, the fans here are great, and I’m so happy to be back in the country that has given me the best moments of my life,” said Silva, who this Saturday will fight in Japan for the first time since 2006 against Brian Stann in the main event of UFC on FUEL TV 8.

It’s been a long time coming for Silva and his fans, but even though he has competed in the UFC since 2007, he knew this day would eventually arrive.

“UFC has been going around the world, and I knew one day I was gonna have the opportunity to fight here again, and that opportunity is back,” he said. “I’m so happy to be in the main event against a good opponent in a good arena. I’m so glad for this moment in my career.”

Yet while the focus has rightfully been on the former PRIDE champion’s return to the country where he made his name from 1999 to 2006, why Silva and not one of the other fighters that competed in the promotion over the years? Why was he the one Japanese fans adopted and still revere?

“When I first started to fight here, I came from the poor part of Brazil,” said Silva, giving his take on the answer to that question. “I was born poor, and the people looked at me and felt a connection. And this is around the world, not just in Japan or the USA. I came from the people and I have a connection with them. Here, after I started to fight, they liked my style, they saw the respect I had for the public and the show, and they knew I was gonna give my all when I fight.”

Nearly 14 years after that first PRIDE bout, a decision win over Carl Malenko at PRIDE 7 in September of 1999, little, if anything, has changed in Silva’s fighting attitude. When he steps into battle, it’s all or nothing. That has led him to several epic wins over the years, but several humbling losses as well. Entering Saturday’s bout, Silva’s UFC record is just 3-5, but that record includes four Fight of the Night and one Knockout of the Night award. Against Stann, no stranger to standing and going punch for punch with an opponent, Silva may want to clear some space in his wallet for another post-fight bonus check.

“He has a style like my style,” said Silva of Stann. “He comes to fight, he doesn’t run in the Octagon, and that’s the kind of guy I like to fight. I don’t like to run. He’s the perfect opponent for this moment.”

This moment will also see the Brazilian bomber at the weight he fought at for much of his career – 205 pounds. That’s one welcome addition to the Silva household.

“Sometimes I had to lose close to 30 pounds in four months and it’s too much,” he said. “This is hard for me and hard for my family. I’d be sad in the home, I don’t smile (Laughs) and now I’m good. I had to diet, but not too much. I feel strong and I can eat and I feel better. 205 for me at the moment is good.”

But when asked if he will remain as a light heavyweight after this bout, he is non-committal.

“I don’t know,” he said. “I’m just gonna look at what’s gonna happen right now, and the future is after the fight.”

So no decisions about his fighting future?

“I can’t say,” he laughs. “No decisions until the last moment.”

And that’s the way it should be. The 36-year-old legend has earned that right. So for now, there’s no talk about the next week, the next month or the next year. It’s all about Brian Stann and this weekend’s fight in his second home.

“I have to control myself because being back here is a lot of emotion for me,” said Silva. “So I need to know what I came to do over here, concentrate on my opponent and my game plan, and go and win the fight.”