Wanderlei in Brazil: Remembering the Old Days and Readying for War at UFC 147

"I feel really good. I’m in my hometown, I eat the food from here, I train with the guys from here. I remember my old days." - Wanderlei Silva 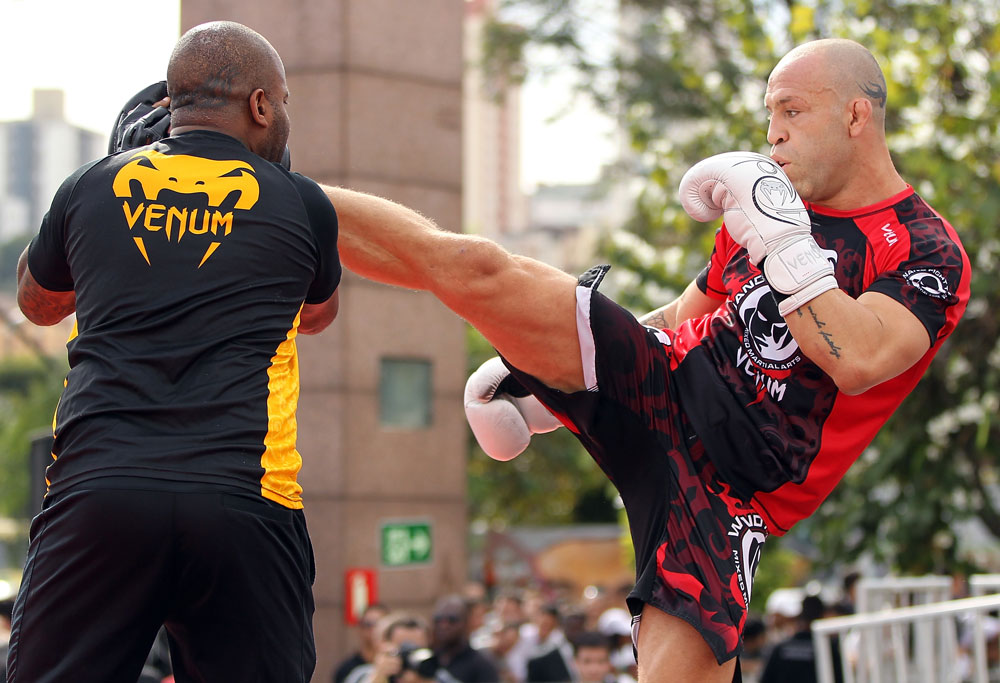 It was going to be so good. Wanderlei Silva vs. Vitor Belfort II. Nearly 14 years had not been long enough for Silva to get over the quick TKO loss to Belfort at Ultimate Brazil in 1998 and now he had a chance for revenge in his home country. And, oh yeah, Silva really does not like Belfort. He’s made that quite clear over the years and did so again when speaking with UFC.com about the Belfort rematch. The rivalry even grew over the course of the inaugural TUF Brazil season which they both coached.

But all that went away when Belfort broke his hand and was forced to pull out of the UFC 147 fight with Silva. Replacing Belfort against Silva this Saturday is former middleweight champion Rich Franklin. The fight will take place at a catchweight of 190 pounds.

The disappointment at losing the Silva/Belfort rematch was palpable in the fight world. Sure, Franklin is another former champ and future Hall of Famer. It is also true that Franklin/Silva is also a rematch that gives Silva a chance to even the score with “Ace” (Franklin won a decision over Silva in a Fight of The Night performance back at UFC 99), but would Wanderlei have the same fire against someone of whom he’s had nothing but positive things to say?

“I’m here to fight. With everybody. No matter who,” Silva says.

The succinct and chilling answer from Wanderlei should answer that. But really, this is something we all should have known about the fighter.

Silva has an uncanny ability to walk into the ring or Octagon all-smiles, only to have his visage darken moments later as he attacks his opponent with an unrelenting fury. While obviously not literally true, Silva’s nickname of “The Axe Murderer” has never really been considered hyperbole, at least in spirit.

The point is, Silva can turn that switch that flips him from perhaps the friendliest fighter in the UFC into a ruthless competitor. But how, exactly, does he do that?

“Man, I don’t know,” Silva wonders himself before pausing to think. “I’m a happy guy. When I see my opponent, though, when he is across from me, I’m ready. I take my job very seriously.”

More, perhaps, than reflexes, physical strength or skill, this innate ability to become instantly war-ready is invaluable to top athletes. It has to be part of the reason that Silva became such a dominant champion at 205 pounds in PRIDE despite being very undersized.

He is ferocious and he will have no problem unleashing that on Rich Franklin, even though he respects the American. Wanderlei loves the fight itself too much to do anything less.

It is, in large part, that love for battle that has kept Silva in the fight game for so long. He is only 35 years old, but has been in plenty of wars in training and nearly fifty career fights.

Wanderlei once went over four years and eighteen fights without a loss, but for the past six years, he’s lost more than he’s won, often by knockout. If he can get a homecoming win in Brazil, one imagines that it would be a perfect note for Wanderlei to go out on, that he’d then retire.

Though he admits to having begun to plan what he will do once he stops fighting, Silva is not ready to concede his career just yet. “I don’t know,” he says.

“I fight one fight after another, you know? I check my performance after the fight. If I’m fighting good, man, I can’t [stop]. I’ve got to check what’s going to happen. I have started to look for my next step in the sport, though.”'

That is a tough line for a fighter to toe, and Silva isn’t the first to do so. Someone as good as him can still pull off wins long after his prime has gone. But for now, Silva is hopeful that if he’s got more great wins in him, the next one comes in front of his countrymen at UFC 147.

A consummate performer, the emphasis for Silva really is on the “great,” and not quite as much on the “win,” part. Take, for example competitive decision losses like those he has taken at the hands of Franklin or Chuck Liddell. Wand still considers those types of bouts successes because they were exciting.

“Some fights that I’ve lost by decision, like with Franklin, with Chuck Liddell, man, I don’t feel bad,” he says. “I think, ‘man, this fight is going down in history, we’ve made the fans happy,’ and that’s the point of the fight.”

He’ll have a lot of fans in Brazil to make happy at UFC 147. The UFC is exploding in popularity in Brazil. Jose Aldo’s last UFC featherweight title defense was watched on television by nearly 100 million Brazilians, and Silva and Belfort’s TUF Brazil was watched every week by millions more.

Silva couldn’t be more excited. For the first time in seven years, he held part of his training camp in Brazil. He did part of his camp in his new home of Las Vegas in his Wand Gym, went a few hours west to his long-time coach Rafael Cordeiro at Kings MMA in California for another portion and then, with a month out before the fight, Wand returned to Brazil to train with another long-time coach, Andre Dida.

Wanderlei has been training with Mauricio “Shogun” Rua and many other teammates from the Chute Boxe days. Silva says that connecting with his roots has felt great.

“I feel really good. I’m in my hometown, I eat the food from here, I train with the guys from here. I remember my old days. The quality of the guys here is so good, the guys train well, I am so happy,” he says.

As for the fight itself, Silva doesn’t get specific on predictions for how he will beat Franklin but he has the important stuff mapped out for June 23rd. It has been nearly 12 years since Silva has fought in his home country. Back then, he was fighting bare-knuckled and in obscurity.

At UFC 147 he will return as a superstar. He can envision that night clear as day.