Walt Harris Fighting For More Than A Win In The Octagon

Walt Harris is attempting to not just get a win in the Octagon
By Thomas Gerbasi, on Twitter: @TGerbasi • Aug. 18, 2020

Anyone who has been around heavyweight contender Walt Harris for any length of time will quickly and accurately describe him as one of the good guys of the sport. So why would “The Big Ticket” want to get involved in a dirty game like politics?

He laughs, but then gets serious when talking about his current campaign to get elected to the Homewood City Council, representing Ward 3, Place 1 in his home state of Alabama.

“I'm trying to bring some hope and change and be the voice of some people,” said Harris. “It's a rough time out here.”

But also the perfect time for the 37-year-old to throw his hat in the ring.

“With all the stuff we're going through, I just wanted to try to challenge myself and do something different and I feel like I have a big enough platform and a voice in my community to try to help effect some change for the people that live directly around me.”

When you hear Harris talk about Homewood, it sounds like the perfect place to live, a city with an estimated population of 25,377 that he describes as “a little slice of Mayberry.” And with it so close to his heart, it was clear to an interested observer that the city could use his gifts to help his neighbors.

“One of my friends is running for Mayor, and he came by the house and he was like, 'Why don't you run for my seat in the City Council? I think it would be good for you and I think you would be good for the community because you have a voice,'” Harris recalled. “So I took a couple days, I thought about it, and I was like, man, I've been living here my whole life and I never really dove deep into the community outside of coaching. I worked with a lot of kids in the community for years, coaching football and basketball, and I figured, well, let's try from the politics side, see how the city runs and what it needs and see if I can be of service on that level.” 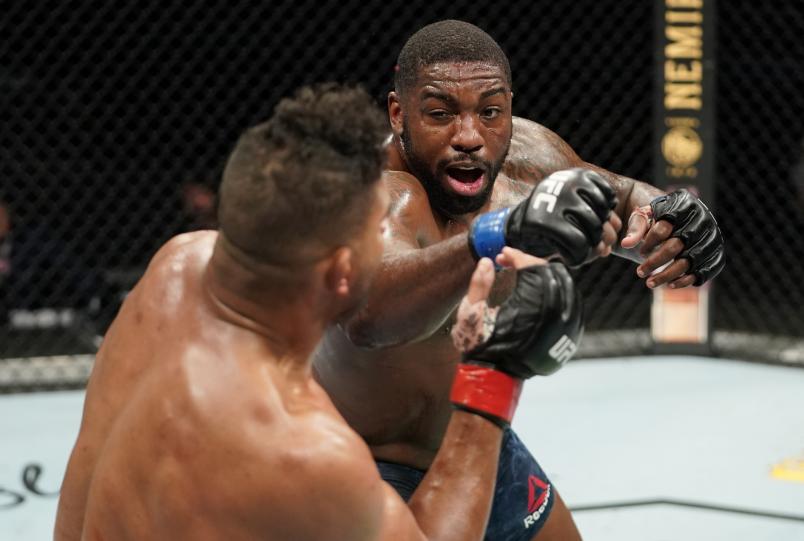 JACKSONVILLE, FLORIDA - MAY 16: (R-L) Walt Harris punches Alistair Overeem of the Netherlands in their heavyweight fight during the UFC Fight Night event at VyStar Veterans Memorial Arena on May 16, 2020 in Jacksonville, Florida. (Photo by Cooper Neill/Zuffa LLC via Getty Images)

JACKSONVILLE, FLORIDA - MAY 16: (R-L) Walt Harris punches Alistair Overeem of the Netherlands in their heavyweight fight during the UFC Fight Night event at VyStar Veterans Memorial Arena on May 16, 2020 in Jacksonville, Florida. (Photo by Cooper Neill/Zu

But what about mudslinging, negative TV ads and all that fun stuff? Harris laughs, making it very clear that local politics doesn’t get that ugly, at least not in Homewood.

“I'm actually running against a guy I'm acquaintances with,” he said. “I coached his son in basketball. It's funny because everybody that's running has had a part in my life at one point. That's how tight-knit Homewood is. We all know each other. It's a friendly race, there's no slander or nothing like that. Everybody's running and whoever gets voted in, we're gonna wish you the best and keep going.”

That’s not to say Harris plans on losing. He’s determined to get the most votes on August 25, and if he is elected, he’s got plenty of work he wants to get done.

“We also have a big thoroughfare called Lakeshore right by my house, and it's not very safe,” he continues. “And a lot of people walk to the trail and across the bridge and there's no way to really access that point without going across that big, busy interstate, and it's very, very dangerous. So I want to make sure we have some sidewalk connectivity to these communities so people can walk safely. In this community, a lot of people ride their bikes and they walk with their kids and I just want to make sure it's safe for them. I also have this thoroughfare called Green Springs, which is struggling right now. It used to be really developed and the businesses have kind of gone away, especially since COVID, so I want to work to keep revitalizing Green Springs. We've got a lot of businesses still up and running over there, but it could be a lot better, so I'm gonna continue to work to revitalize Green Springs and bring that back.”

Keeping Homewood united during unprecedented times in the United States is also high on his to-do list.

“I want to do something to unify the community because COVID has made everybody distant and people are kind of afraid to talk and come out,” he said. “Homewood is a tight-knit community and COVID put a strain on that, so I want to do some things to unify the community, whether it's monthly block parties, get-togethers at the park, little things like that to try to make sure that everybody's staying in touch and we're all looking out for each other.”

As Harris explains, he may be a UFC star when he steps into the Octagon and throws hands with the top heavyweights in the world, but at home, he’s just Walt, and he likes it like that.

“I'm very accessible,” he said. “People come to my house, knock on the door, we sit outside and talk. I ride my bike through the neighborhood, so everybody knows me. So I feel like if I get elected, I can be a voice for everybody and speed along some of the needs that they have.”

Yet with all the talk about what Harris wants to do for his community, going through this campaign has also kept him busy between training camps and helped the healing process as he and his family approach the one-year anniversary of his daughter Aniah’s kidnapping and death.

“It's coming up on a year since we lost her, which is insane to me,” said Harris. “It (the campaign) has given us a respite from focusing on things like that. And my wife (Angela) is still working on the non-profit (Aniah’s Heart - https://www.facebook.com/aniahsheart22/). It's up and running right now, so we're just keeping ourselves busy and trying to keep positive and bring some positivity into the world. There's so much drama and so much stuff to worry about. We're just trying to be a beacon of light right now.”

So what would Aniah have thought of her dad running for political office?

“She always pushed me to challenge myself,” said Harris. “So I think, at first, she'd probably be like, 'Dad, what are you doing?' (Laughs) And then, 'How can I be a part of it?' That was always her thing. She always wanted to be a part of whatever I was doing. She loved the fighting, she loved the UFC, she loved the whole thing. Everything that I had going on, she was all about. I always say she was my biggest fan and she always pushed me. No matter what I wanted to do, she would always support it, the same with her mother. They're a lot alike in that respect. When I say I'm gonna do something crazy like becoming a fighter without any experience, they both looked at me like, 'Huh?' Then they said, 'All right, we're gonna support you, let's make a plan and let's attack it.' So I think she would be just like that right now. I know she's looking down and she's super proud.”

That’s as sure a statement as you can get in politics, fighting, or anything. Harris’ campaign is also a sign of how far mixed martial arts has come in the eyes of the public. A couple decades ago (or perhaps even sooner), this probably wouldn’t have happened. But these days, it’s a different story.

“I remember I was fighting during that time and how underground it was to be a fighter,” Harris said. “People didn't really respect it, but now people are accepting of us as humans. They used to look at us as barbaric. Now it's a sport and I credit (UFC President) Dana (White) for that. I told him a million times how thankful I am for him legitimizing what we do.”

Having folks like Harris representing the sport make it easy. Now Harris wants to represent Homewood.

“Homewood is like no other place I've ever been to,” he said. “That's why I can't leave. There's something about this community and the people in this community. They've always been there for me and my family, and I just felt that being a public servant for these people is the least I can do to say thank you, especially in light of all the things that happened with my daughter and how the community responded. I'm excited to do it.”