"Coming out of that last fight, I felt like I belong here. And, with this fight, I am going to come out and show it." - Walt Harris 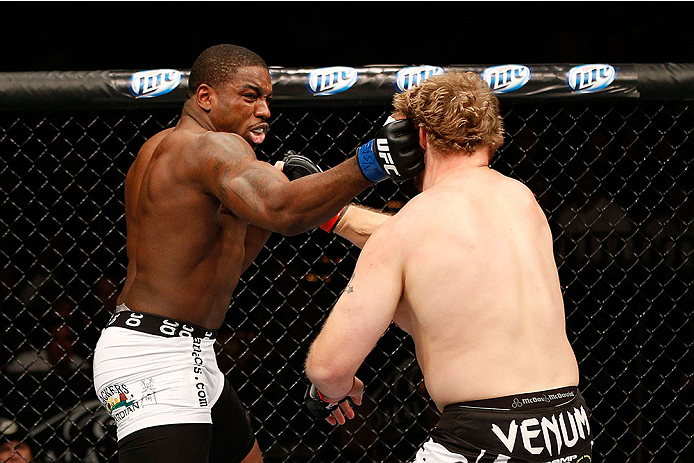 They say knockouts cannot be forced. You should never chase them. A finishing blow is about timing most of all and that can’t be rushed. One must wait for the opening to materialize, recognize the opportunity, and capitalize with devastating power and precision.

In his UFC debut, Walt Harris delivered a big blast in the opening stages against Jared Rosholt at The Ultimate Fighter 18 Finale and dropped the wrestler early. From there, the excitement of the moment took Harris away from game plans and his power punches became telegraphed as he hunted for the knockout shot. It’s a mistake the young heavyweight recognizes and is ready to right as he prepares to enter the Octagon for the second time.

“I thought I performed well, but I think I could have performed better,” admits Harris. “I thought I could have picked my shots better. I threw a lot of power in my shots instead of setting up my power shots better. The one thing I'm focused on fixing in this camp is being more patient and setting up my power. Rocking him as early as I did, I got excited, honestly. It's all a learning experience. I just need to take my time and set up my power shots.”

And the 30-year-old has learned a lot about knockouts first hand with his two hands. At 6-2, all of Harris’ wins are by KO with all of them under 2 minutes into each bout. If that wasn’t impressive enough, “The Big Ticket” has a reported amateur record of 23-1, with all wins by KO. Since switching his athletic life’s focus to boxing and MMA, most of Harris’ opponents have been dealt with via hard knuckle sandwiches at the end of the 6’5” fighter’s lengthy reach, but “The Big Ticket” admits he didn’t expect to be the flooring machine he’s become.

“Of course, whenever someone starts boxing that's their dream, but I never thought it would be my main thing,” reveals Harris. “I just wanted to get well-versed in the sport and work on my stand-up. My coach Jon Dye and I focus on being technical and being sharp. I am technical, my training is technical and we focus on the small things. That's what I've been trying to do in my career. That's why I get those knockouts. A lot of guys throw those big looping punches, but I throw straight down the middle and I'm going to get them first. At the heavyweight level, it doesn't take much.”

In a possible growing trend, Harris made the crossover from the world of basketball to fighting, much like top contending heavyweight Travis Browne. After playing NCAA Division I ball at Jacksonville State University, Harris did have eyes on being a professional, but it did not pan out. As a fight fan himself, he chose to keep in shape by joining a fight gym, Champions Freestyle Fitness in his native Birmingham, Alabama. The athletic talent and skills to play basketball at a high level translated over nicely for Harris, and his size didn’t hurt him either.

“Hand-eye coordination and footwork,” says Harris about what carries over from the court to the cage. “Basketball is a lot about angles and positioning your body and having your feet in the right position. A lot of the footwork drills and conditioning we do in MMA we did in basketball: explosive drills, box jump. It's the same type of athleticism to fight. Basketball players are lean, long, and explosive. I think it translates perfectly. Basketball is a lot of up and down, stop and start, quick explosive movements from side to side. A lot of the boxers I knew who came from basketball did very well. I think more basketball players should cross over. I think in the next 10 years you'll see more basketball players migrate over to MMA.”

Up next for Harris is a fight finisher’s fracas at UFC on FOX in Chicago, Illinois against the young and mean Nikita “Al Capone” Krylov. The Ukrainian with a background in Kyokushin Karate is 15-3 with all wins via stoppage (5 KO, 10 subs) and all in the first round. The 21-year-old is the fourth youngest fighter in the UFC, but has probably had the fastest track from becoming a professional and making his Octagon debut. In July 2012, Krylov made his pro debut and 13 months later he was 18 fights into his career with a third round TKO loss to Soa Palelei at UFC 164.

“He's a tough, scrappy dude,” tells Harris. “He's a game opponent with a lot of heart. I have to be prepared on every level to go in there and try and break him down. He has a lot of stuff to work on, but he's game. He comes to fight, just like I do. It's going to be a scrap. I think he's going to have a good future, but he's going to have some bumps in the road because I'm not planning on losing this fight.”

In preparation for Krylov, Harris is a member of one of the most prestigious teams in the country, American Top Team in Coconut Creek, Florida. Come fight night, “The Big Ticket” will have his coach from back home, Jon Dye, in his corner, as well as two coaches from ATT: Conan Silveria for ground and Vitelmo Kubis for standing. Not to be outdone, Harris’ teammates are as world class as the coaches, with such talent as 2008 US Olympic wrestler Steve Mocco, who is currently 4-0 in MMA since turning pro at the end of 2012.

“With Steve Mocco’s credentials, him being an Olympian, you're going to learn something new from him every day,” affirms Harris. “That's kind of how we work together. I'll trade off different stand-up tips, like different things I see in his stand-up game that he can improve, and he'll help me with my wrestling. It's been a good thing so far. He's very talented. Going with him and actually stuffing a takedown, it feels like everything to me. I mean you're going against one of the best wrestlers in American history. Just to be able to train with him is an honor and a blessing.”

Nevertheless, Harris knows his bread and butter is his striking and he has been adding more weapons to that already powerful arsenal, which could gleam a Knockout of the Night bonus or two in the near future.

“Punches in bunches,” states Harris of his stand-up. “Learning how to set up power shots. Get better angles. Kicks from different angles. My defense. I've been working on every aspect of the game. Different strikes like elbows. A lot of different things to evolve my stand-up game. My speed and cardio to be able to put out a bunch of punches. Most heavyweights don't punch for volume, they punch for power. I'm trying to be different and set myself apart.”

This Saturday at the United Center in Chicago, a clash of rising heavyweight hopefuls will take center stage as “The Big Ticket” meets “Al Capone.” “If fans love explosive, athletic, powerful fighters who are determined to finish fights, then they need to watch me on January 25th,” hypes Harris, who knows that both he and Krylov are proven fight finishers, which will make for an exciting melee to see who moves up the UFC ladder. “Coming out of that last fight, I felt like I belong here. And, with this fight, I am going to come out and show it."

The way these two score first round stoppages, fight fans won’t need to be patient for an exciting ending.