“My last fight at 185lbs had to be on a playground or parking lot because I haven’t weighed so little since about, 7th grade.” - Pat Walsh 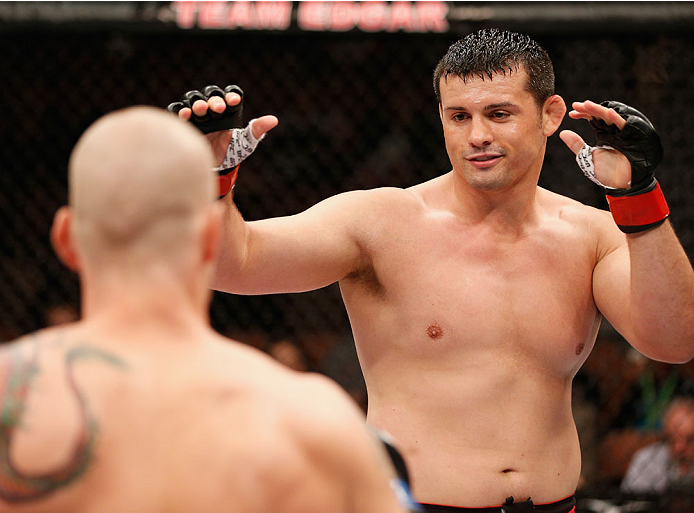 It’s been a while since The Ultimate Fighter 19 alum Pat Walsh fought in the middleweight division, but he’s about to do it again as the UFC returns to Broomfield, Colorado for UFC Fight Night: Henderson vs. Thatch on Saturday.

He will face undefeated Olympic judoka Dan Kelly of Australia.

“My last fight at 185 pounds had to be on a playground or parking lot because I haven’t weighed so little since about seventh grade,” he said.

So Walsh will be feeling a bit nostalgic as he steps on the scale, but that’s a familiar feeling for the Stoughton, Massachusetts native who coaches wrestling at the same high school he attended just ten years ago.

“We are undefeated in the league right now, and 15-4 as a team,” Walsh states proudly of his team. “I was a state champion wrestler at the same school, and it really means a lot to me to coach these kids. They definitely look up to me and respect me. This is my fifth year coaching. They do bust my chops a bit because of being on TV and stuff, but they talk about me to their friends quite a bit. It gets interesting when kids from other schools know me from the UFC, and they want to take pictures and all, but it comes with the territory I guess.”

Making weight is the part of the fight game that most professionals lament the most, and Walsh is no different. However, he understands that if he gets through weigh-in day on Friday, the fun part is just around the corner on Saturday.

It’s a familiar song one hears when speaking to fighters. Many, like Walsh, have been doing it their whole lives as wrestlers, who notoriously cut weight to make their divisions. Somewhere along the way, conventional wisdom among the wrestling community preached that players have an advantage when they compete at a weight class below their natural weight, and that mentality has carried into mixed martial arts as well, but Walsh says he agrees with the idea that he was too short for light heavyweight.

“When I fought Corey Anderson he was four inches taller than me,” he said. “I’m five-eleven on a good day. Do I think I can go with those guys at 205, yeah? But Jon Jones and Alexander Gustafsson, those guys are obnoxiously tall.”

Going up against Kelly for his 185-pound debut will be no easy task. The 37-year-old Australian has only gone the distance once in his entire professional career, finishing seven of his opponents within two rounds, mostly by submission.

“My focus is to stay sharp and to get better at the things I’m already good at,” Walsh says. “I had the opportunity to bring in a bunch of judo guys but I opted not to do that. We know he’s going to be good at judo. My wresting will negate his judo. If he goes upper body with me, I was a high school All-American for wrestling. I can wrestle.”

That said, Walsh didn’t expect he would spend two months of his training camp on the mat, but that’s the way it turned out.

“My game plan was to focus on my stand-up,” he said. “I had a couple of little shoulder injuries that messed up my plan, so I did focus a lot on my jiu-jitsu and I’ve come leaps and bounds with my fluidity, my transitions, and my submissions. All of these things have gotten so good because I had to lose weight, and the ground was all I had, so I was doing three practices a day to lose the extra weight. But my hands really came along in camp too. My philosophy is usually, ‘If I work on wrestling for two months it would only get about two percent better, but if I work on my stand-up for two months, it could get twenty percent better.’ So that’s what I’ve been doing for all of my fights, but this one really forced me to shore up my ground game and I’m glad it did. My jiu-jitsu is in good shape and my wrestling is in good shape.”

As with most challenges in one’s life, it’s easier to overcome them when one is helped along by a cadre of supporters who are going through the same struggle, and in his case, Walsh has an entire wrestling team to lean on when it comes to training and cutting weight.

“They’re not just my team, they’re my drilling partners too,” he says. “I think it helps them that I am in the UFC. It motivates them to make their own dreams come true. The simple fact that I went through exactly what they are going through is a lesson in and of itself. I had the same teachers they do, and I wrestled for the same school they do, so they know that just ten years ago I was just like them, and that they can make their dreams come true with hard work. It doesn’t matter where you’re from, what matters is what you do. There’s a heavyweight on the team that is a two-time state finalist. He weighs 215 pounds. That’s exactly where I was ten years ago. I’m not any different than they are.”